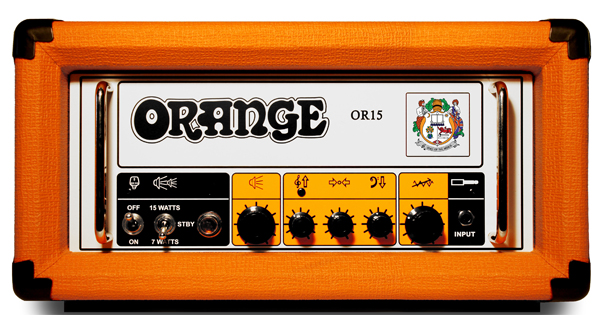 There's a definite buzz about Orange amps these days - and we don't mean an earth loop! The veteran UK brand is hotter than it's ever been and now there's a brand new model, the 'pics only' OR 15.  So what does our equally veteran tone purist Michael Casswell think of it?

There's no mistaking the look of an Orange amp - and there's definitely no mistaking the looks of this one! Innovative, right from when the brand sprang to life in the 1970s, one of Orange's little design 'quirks' was the series of amps with no words on them - just pictures describing what the controls do. Orange revived the style back in 2008 when it reissued the OR 50 but as we all know, 50 Watts of valve power can be awfully loud. Hence the OR 15 version we have here, launched at last year's NAMM show and just becoming available now.

The OR 15 is a single channel, all valve, 15 Watt, class A micro amp. The 'micro amp' trend is sweeping through the industry and every company is putting out their own version of a low wattage small portable practice-studio amp, but Orange was in there right at the very start of the trend and clearly has a lead over some of the competition.

If the layout is simple enough to rely on pictures for guidance, so is actually driving the OR 15. If you want it clean, you turn down the gain and turn up the master volume. If you want filth, you turn up the gain volume and maybe even the master volume yet again, depending how loud you want it. 15 Watts is more than loud enough for home and studio use, but it will struggle next to a drummer. I have found 30 or 40 Watts is the point in a band where you have a bit of headroom to hold your own. If 15 Watts is too scary for you, then there is a switch on the front to half power it to 7 Watts - something you are probably going to want to do for practice at home unless you own your own barn!

The OR 15 has three ECC83 pre amp valves and two EL84 output valves - a classic arrangement for the 'British' sound, although in some ways that's a misnomer in this case as what this Orange is really good at is allowing you to get the sound you make with your guitar and playing style. There is also a valve driven series effects loop which is always good, because sometimes practice at home can involve your pedals and getting familiar with what you need on and off and how you want them set, so that when you play with your bigger and louder stage rig, you are already rehearsed with those reverbs and delays.

The amp weighs 7kg and is small enough to be very portable. Obviously, you are going to need a cab to use, which is the point where it becomes less portable because this little 15 Watter can sound very grown up indeed through a big fat 4x12 cab. Orange cabs do sound big fat and huge. I think they are deeper in depth size than most brands out there which makes them sound great. I was spoilt with the sound, because we put it through the 4x12 cab it came with, and if you are going to use it to practice or record at home , the chances are you will be using a basic 1x12 cab, which means it will still sound good, just not as good. Try it with a 4x12, though and you might change your mind about what to use with this great little amp.

The OR 15 takes boost and overdrive pedals well, which is the sign of a nicely voiced amp. Because it has just one channel, it will teach you how to control the volume on your guitar to get clean, crunch, gain and then more gain if you kick in your favourite pedal. These is a technique that often gets missed and if it is, will lead to your touch, note production and tone being average rather than fantastic.

An amp that teaches you how to get a good sound? In a way. It certainly nudges you in the right direction!

I like Orange amps. Every time I've plugged into one it has been a good experience and while the OR 15 may not have the sweetest tone in the world, it certainly has some sizzle and grind and it's not hard to see why Orange is so popular with so many younger, cool bands.

Another winner? Undoubtedly and at a good price, too!