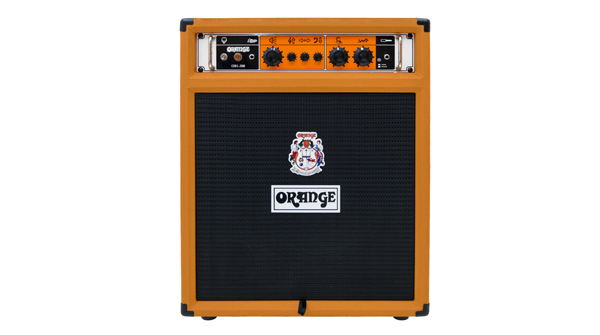 For our second scoop of the 2016 (and it's only January!), Dan Veall was one of the first in the world to get his hands on Orange's latest bass combo.

Orange is on a roll with bass amps. New for NAMM 2015 was the company's excellent OB1 300 head, which I reviewed back in issue 32. Now, brand new for NAMM 2016, the OB1-300 combo brings us the same amplifier coupled to a capable and suitably ‘Rock’ orientated Eminence 15” bass driver in a ported cabinet.

The first thing to say is that the OB1-300 is still a super-easy amplifier to use. The sparse front panel isn’t overloaded with ‘stuff’ and is quite inviting as a consequence. I also like Orange’s use of icons instead of worded labels. There's nothing wrong with having text on an amp, but as this one has so few controls on the fascia, it’s very simple to figure out how to use it sans manual. Intuitive, you might say.

The amplifier, despite being able to switch between clean and dirty sounds isn’t a two channel machine as such but it has a foot switchable drive signal path and what makes this beast an absolute win for me is in simplifying a system I have been running myself for years: having everything in one box is well, heaven sent. Let me explain...

The first four controls are the ‘global settings’ of the OB1. Master volume and an active three band EQ controlling low end, midrange and top end bite in the treble frequencies. This alone is enough to deliver a very pleasing bass sound. Clean and articulate. The next two controls, along with the foot switch jack is for me where the magic happens. I didn’t even wait for the big reveal in the video either - the drive section is alive and roaring right from the get-go. Just two knobs separate you from a rounded clean sound and an all out aural assault which is just sublime! The first is a blend knob, the second is the saturation control for the distortion. With the blend knob starting at a completely counter clockwise position, you will enjoy the clean sound of the amplifier. By advancing the blend control round, you will progressively add in more of a distorted sound in parallel with the clean signal. This means that you will never lose your clean sound with its low end punch.

The drive is layered on top, which is so much of a better way of adding distortion to a signal on bass rather than dropping a guitar distortion pedal in the path between you and amp. What’s more, the bass signal is filtered before it goes through the distortion. This means, the actual drive characteristic isn’t all bloated, mushy and incoherent - a problem with some bass drives that are very unlikely to make it to my pedal board.

As I mentioned above, the second dial, allows you to select exactly what sort of drive you want. It's really good, from the very lowest of settings where you have the lightest grit added to your bass signal to ‘warm’ it up a bit, all the way round to a very ‘this one goes up to 11’ setting. Mr Tuffnell would be proud! It’s guaranteed to raise a big smile and great for replicating some of those high gain settings that bass players from our favourite bands have used. You also have the option of using the three band EQ to further sculpt the sound of the driven bass sound as it is placed after the distortion section in the preamplifier.

Round the back of the combo, it’s again a very simple affair and that’s a good thing for most. Mainly, you are confronted with not one, but two Speakon output sockets. One is taken up by connecting to the internal 15” combo speaker - the other could be your secret weapon. There is no tweeter fitted, but the onboard Eminence speaker actually has a smooth top end to it although I am not sure what model is being used in this combo. The second Speakon connector is for adding extension cabinets and that is absolutely brilliant if you have different gigs to play. Take the combo to a small show or upsize when you are doing a big stage by putting the combo on top of another Orange cabinet (or whatever you prefer). It makes for a great modular set up I feel!

So Orange has put its best foot forward for the new year with a really great, aggressive Rock sounding bass amp that is very well made, easy to transport and use, is capable of Jekyll and Hyde bass sounds, switchable at the flick of a switch from mellow to fat (with a capital PH!). What? You need more than 300 Watts? Well, that's no problem as the OB1-300 also has a big brother, the OB1-500. Great stuff, Orange.