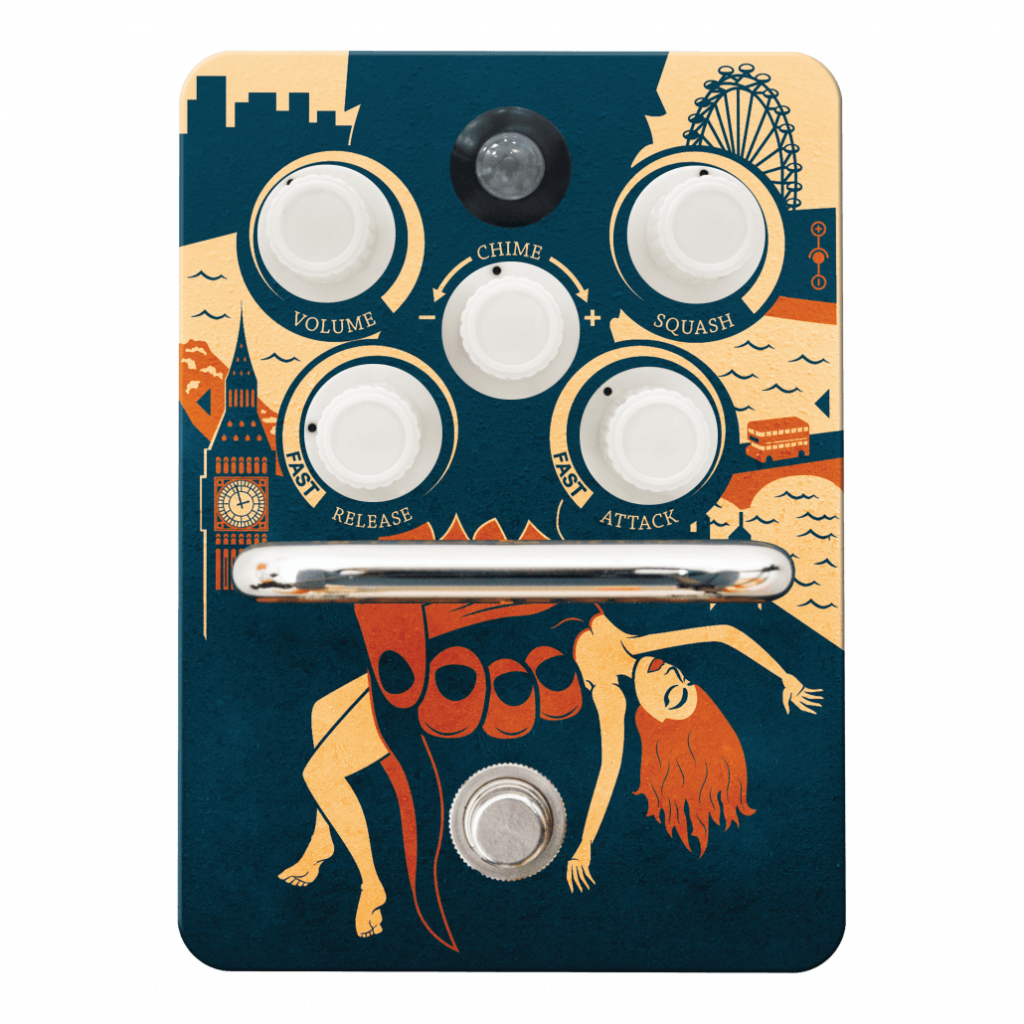 The Kongpressor is a superb compression tool that really has a voice all of its own. The unique optical circuit design offers benefits not found in most other compression pedals.

Won’t suit those looking for the ultimate in transparency

Orange is unusual for an amp maker in that it not only succeeds with both guitar and bass amps but also thrives in the effects pedal market. New at this year's NAMM show was the Kongpressor, now in stores worldwide. Tom Quayle assesses a very superior kind of compressor.

The Kongpressor is Orange’s take on the guitar compression pedal, but it is certainly more than just another compressor slugging it out in an already crowded marketplace. Rather than relying on the standard OTA (Optical Transconductance Amplifier) type of compression found in the vast majority of compressor pedals out there, the Kongpressor uses a Class A, Optical design, offering a very smooth, musical response and bloom. Orange claims that the pedal adds an organic three-dimensional quality to any rig by utilising a re-issue of the famous vactrol VTL5C3 optocoupler, responsible for the sound heard on countless hit records.

Like all of Orange’s pedal designs, the Kongpressor is a wonderful looking stomp box that doesn’t take itself too seriously from a visual point of view. The fantastic London backdrop in blue, yellow and orange, with King Kong’s fist clasping a defenceless Ann Darrow-esque maiden looks great against the white, oversized dials and metal bar, protecting said dials from your size 12 boot. The pedal is housed in a bomb-proof metal chassis, with side mounted jack sockets and a standard 9v DC input that is doubled internally to 18v for increased clean headroom via Orange’s Internal Charge Pump technology. A large LED is mounted at the top of the unit to indicate bypassed or active state from the solid feeling latching footswitch.

The pedal features controls for Volume, Squash (compression amount), Chime, Attack and Release. The Chime function controls an active treble boost or cut for shaping your tone whilst the attack and release allow you to shape the transients and tail of your notes. Optical compressors have a naturally longer release time that is less transparent than an FET or VCA compressor, but the Kongpressor can give you a nice tight, transparent release at its lower settings if required.

The wonderful thing about optical compression is the way in which it does change your tone - adding a depth and perception of warmth not found with more transparent compression methods. The Kongpressor is no exception - at unity gain, with the compression set half way and medium attack and release times, the pedal imparts a lovely extra dimension to your sound that fills it out in a thoroughly pleasing manner and makes playing both easier and more satisfying without being over the top in squashing your sound. Rolling the compression off and boosting the volume control can net you up to +12dB of volume boost that is very transparent with the compression out of the picture. Dialling the compression back in adds warmth and richness to both clean and overdrive sounds without ever losing low end or totally killing your dynamics. Orange describes the Kongpressor as a ‘leave on all the time’ pedal and it’s easy to see why. No matter where you set the controls, your sound gets bigger and more fun to play.

The Chime control is very musical, allowing for significant boosting or cutting of your high-end frequencies. This could be a very useful tool for brightening up dark humbuckers or taming spiky single coils, but is also useful for taking the edge of the drive channel of your amp or adding some detail and pick attack to smooth lead tones. There was no perceptible noise increase whilst boosting with this control - the Kongpressor is a very quiet compressor in terms of signal to noise performance.

The attack and release controls are also very effective, slower attack times giving more punch to the note and more pick attack whilst slower release times give more sustain and a warmer sound. Dial in a faster attack time to give a more compressed and consistent attack and faster release times for a more natural note decay and transparency. A lot of compression pedals don’t include a release time dial, so it’s nice to see one included on the Kongpressor.

Orange has bucked the pedal market trend for ‘True Bypass’ operation here, instead opting for a highly transparent, ultra-linear buffered bypass circuit instead. The benefit is that you can run long cable lengths and complex pedal boards with tons of patch cables without any loss in your high frequency range or upper harmonics.

The Kongpressor is a superb compression tool that really has a voice all of its own. The unique optical circuit design offers benefits not found in most other compression pedals. If you are looking for the ultimate in super transparent compression then the Kongpressor is probably not for you. But, if you are looking for a pedal that you can switch on and instantly improve whatever tone you had already, whilst providing great sounding and feeling compression at the same time, then you must check this pedal out. Fantastic stuff from Orange once again and great value for money. 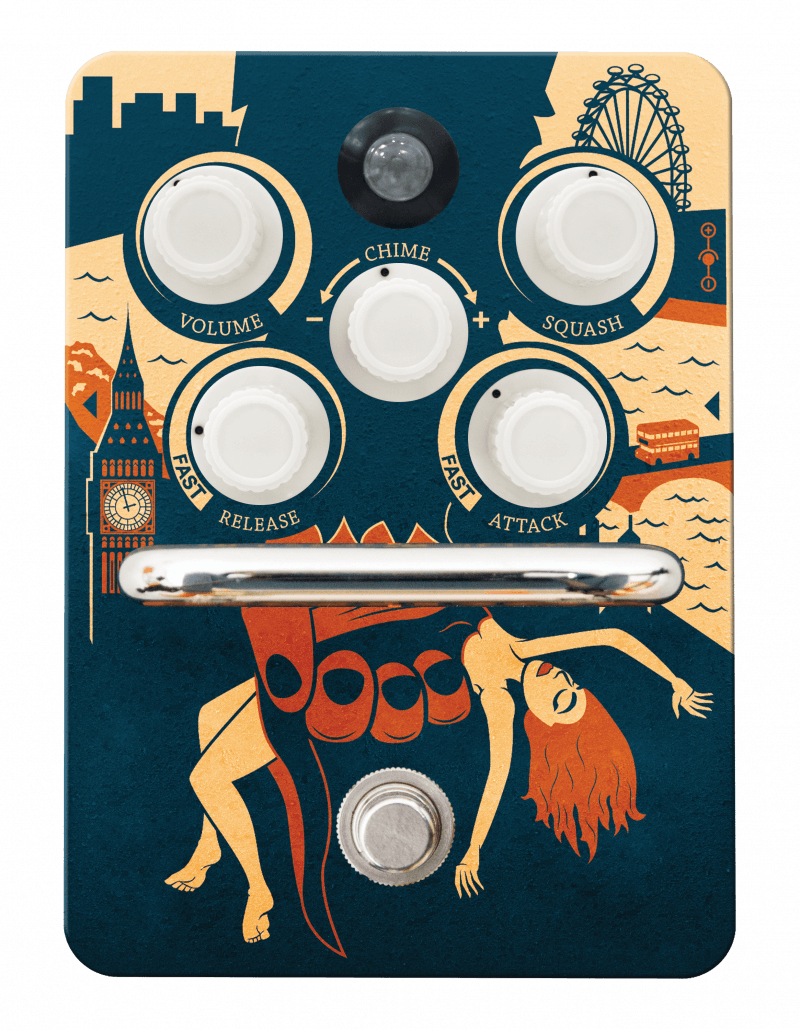