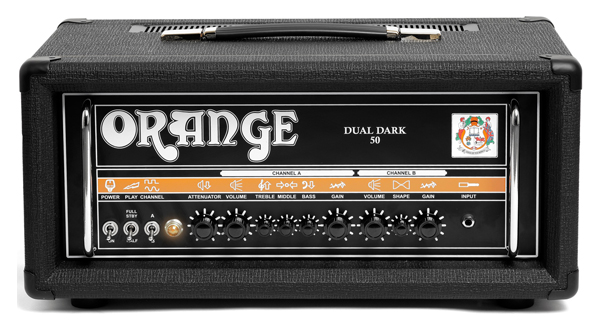 Hot on the heels of the hugely successful Dark Terror series comes this brand new amplifier from Orange Amplification. We are, of course, talking about the new Dual Dark. Unveiled at this year's NAMM show, this new breed of Orange amplifiers is not a repackaged version of the Dark Terror series, it offers new features, which take it into deeper, darker territories. This new amplifier offers two channels, one of which is a completely new voicing, and also offers attenuation, which varies depending on the model of the head.

These new amps also offer the highest amount of gain available in any of Orange's line of products, which is saying something! Let's take a closer look.

The Dual Dark comes in two versions: a 50 Watt head and a 100 Watt head. For our review, Orange supplied us with the 50 Watt version, though most of the features are shared, so my comments will apply equally to both.

The Dual Dark has a layout very similar to that of the Thunderverb, so users of that amp will feel comfortable right from the start. This amp features two channels marked channel A and Channel B. Channel A is a completely new voicing never before used on any of Orange's amps. It features a three band EQ stage of Bass, Middle and Treble as well as a Gain control and an Attenuator control.

Channel B comes straight from the previous Dark Terror and features a shape control for tone shaping. Both of these channels feature four stages of gain. The amp also features an onboard attenuator which can be controlled via a footswitch. Combining that with the attenuator control makes for a useful and versatile live set-up. The amp's output can be halved via a toggle switch on the front of the amp, which essentially shifts the output tubes from Class B to class A mode, which gives a different response as well as power level. The 100 Watt head version, incidentally, gives you the ability to between 100, 70, 50 or 30 Watt output. The Dual Dark 50 comes fitted as standard with EL34s in the output stage and each tube has its own 12 turn bias pot making it usable with various different 25 Watt tubes. The head also features a valve driven FX Loop.

Finally we get to the fun part - how it sounds! Starting off with some clean settings on the A channel, I could tell right from the outset that this was my kind of amp. Immediately, I could feel how responsive it was to my playing - the amp almost felt alive!

The EQ on this channel delivered some surprises, offering what sounded to me like a much wider frequency response than any other Orange amps I've tried, providing a lot more in the way of tone shaping options. Dialling in a touch of gain produced some stunning crunch tones, again retaining that impressive responsiveness. Pushing the gain even more gave rise to superb lead tones. Even though this channel is a completely new voicing for Orange, to me it still felt like an Orange through and through, so gaining that flexibility hasn't come at the expense of the traditional Orange 'feel'.

Moving on to channel B, again the clean tones sounded excellent, albeit a little different than channel A's, which of course is a good thing. This channel is capable of some truly stunning tones particularly on higher gain settings. The heavily saturated lead tones that this amp is capable of pushing out are nothing short of inspiring.

Again, the level of responsiveness is phenomenal, whether using a clean tone or full on gain. I could have easily played on this amp for hours, just enjoying that combination of superb tone and responsiveness.

The Dual Dark is quite simply a stunning amplifier. It's a versatile beast too, with a wide variety of tones on tap, useful attenuation features and two different sounding channels that complement each other perfectly. The clean tones are impeccable, as are the crunch sounds and the lead tones are simply stunning and that's not to mention the incredible dynamic responsiveness.

As for our rating, giving the Dark Terror the magic extra half star that we reserve for special value may seem strange on a $3,000 amp but what you have to do is compare this new Orange with 'boutique' amps which often cost a great deal more. Is it in that class? Yes, it is - and that's what makes it great value for money.