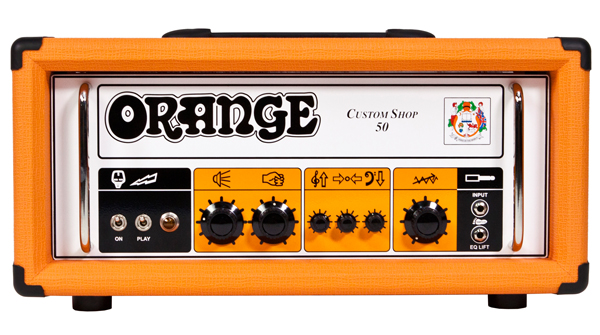 Rumours among players who'd tried pre-production samples suggested that Orange's new Custom Shop CS50 could be one of the finest amps the company has ever produced. We were anxious to check it out - but who do we know who is really demanding of amps? Ah, yes...Tom Quayle!

Described by Orange as 'The Definitive British Rock Amp' the new Custom Shop 50 sits proudly at the top of the company's amplifier line, designed to deliver the most organic and classic Rock valve/tube tones of the type that Orange is famous for. Sporting the traditional Orange visuals and vintage 'Pics Only' front panel, the CS50 certainly looks the part but, considering that this is one of the most expensive amplifiers in the Orange range, it really has to sound the part too.

The CS50 is a single channel, hand built, all tube, 50 Watt head powered by two Ecc83/12ax7 preamp valves and two EL34 power valves for a truly British tone. The front panel features Gain, Presence/HF drive, Treble, Middle, Bass and Volume controls along with power and standby (called Play in this case) Orange LED power light and guitar and EQ Lift footswitch inputs. Around the back of the amp you'll find outputs for 8 and 16 Ohm cabs plus a switch to take the amp from Class AB 50W mode into Class A 30W mode for pushing the power tubes more aggressively at lower volume and changing the subtle tonal nature of the amp.

This is a simple and classic design that is instantly recognisable and oozes quality both externally and internally, where you'll find hand-wired, point-to-point circuits and high quality components for the purest signal path and tone possible. The foot-switchable EQ lift provides a sustain boost for solos and completes a design that really harks back to the golden era of British Rock. The only aspect omitted from the design is an effects loop, which I can only assume is for reasons of tonal purity. This may put a few potential buyers off the CS50 and seems like a missed opportunity to me, but will be seen as a bonus by others seeking complete vintage accuracy and tone.

The first thing you'll notice about the CS50 when you see one is the bulletproof construction and superb build quality. This thing really feels like it's been made as a labour of love and whilst not exactly light, feels incredibly well put together and reassuringly hefty, given the delicate hand wired innards. All the controls operate smoothly and the switches have that wonderful resistance followed by a solid click as they move between each position. The CS50 is built in the UK to last and perform night after night, and you can rest assured that it will do just that if our review model was anything to go by!

To test the CS50 it was plugged into our Orange PPC412 cab fitted with Vintage 30 speakers and driven using a vintage voiced single cut guitar with lower output humbuckers. Immediately, I was struck by the dynamic response and beautiful chime to the clean tone. The detail and pick response is nothing short of astounding and makes you play better as you listen much more to your sound and the way it is interpreted by the amplifier. Cranking up the master volume in 50 Watt mode reveals an impressive amount of clean headroom that really blossoms into a stunning crunch tone at full pelt, perfect for classic Rock, modern Jazz or Blues tones.

Increasing the gain provides a plethora of touch responsive rhythm and lead tones that are full of harmonics and rich in both the bottom and top end. Using the HF Drive adds in upper high frequencies and power amp drive to really push the sound in a band setting and works very well with the highly musical EQ controls to dial in a large variety of tones ranging from smooth lead tones to punchy and cutting rhythm sounds. Rolling back the guitar's volume control, the CS50 cleans up beautifully, even with the gain cranked, showing that a single channel amp of this quality can be just as versatile as a modern three channel monster, provided you're happy to ride the volume control on your guitar. Switching to 30 Watt mode gives clean and overdriven sounds a little more bite and clarity, traded off against slightly less clean headroom.

This is definitely an amplifier that shines with just you, a guitar and a cable - the less fuss the better. It's an amp that sounds great with humbuckers and single coils and for those looking for hand-wired classic British drive and clean tones in a simple, back to basics design, the Custom Shop 50 is hard to beat. The lack of an effects loop will be a deal-breaker for some, sadly, myself included - but tonally the CS50 is pure gold.