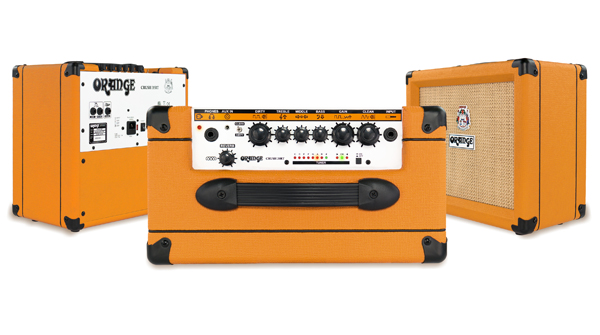 Orange amplification is synonymous with British guitar tone, having helped craft the sound of British guitar amplification for almost 50 years. Initially introduced in 2000, the Crush series was launched as a range of practice amps offering good solid state tone on a budget. The latest addition to the series is the Crush 12, 20, 20RT and 35RT, and I couldn't wait to try them out.

It's worth pointing out that these amps are a complete redesign of the old amps with some great features, but let's talk from the ground up.

As the numbers suggest, the Crush 12 is a 12 Watt, the 20 is a 20 Watt etc. We were sent the 20RT and 35RT to check out, so it's worth explaining that the RT stands for “reverb and tuner” which doesn't come on the smaller models. Aside from that, the only other differences are that the 35 has an effects loop and a 10 inch speaker, but the 20 doesn't have an effects loop and comes with an 8 inch speaker.

Both amps feature an impressive four stage pre-amp which puts a range of complex tones in the hands of the player, with a pre-amp section featuring low noise operational amps to provide four stages of gain - and a quick turn of the gain knob really shows how in depth these amps can go. If you're into Jazz, Blues, Country, Rock, Metal or anything else, the chances are you'll be able to find a tone that delivers in the practice room.

Aside from both amps having great dirt channels, they both feature a solid clean tone selectable with either the switch on the amp or via a footswitch (which isn't included, but any external switch will work).

As far as three band EQs go for a clean channel, it's a pretty standard affair here for an amp of this type. It almost feels like Orange has held back on these knobs in the sense that they're confident enough in the tone out of the box that the EQ knobs don't need a massive sweep, but in all fairness, for the target market, that's not a bad thing at all. I remember learning to play and using my little practice amp and what I wanted was for it to sound good, but I didn't really know how to - the Crush series will take care of that!

The reverb and tuner on both amps are more than satisfactory, with a very organic and warm spring reverb and a fast tracking built in chromatic tuner which facilitates fast tuning on the fly with the LED based display.

For me, the most exciting feature of this amp is the cabinet simulation on the headphone out. For recording at home, getting a good tone captured can be a pain for someone who doesn't have much experience with miking techniques. For these users Orange have a great built-in 4x12 cabinet simulation which is accessed via the headphone port, so either as a tool for practising with headphones, or recording via line out into your computer, you've got a great feature here. If you check the video you'll hear a great example of the amp both miked up and via line out and it genuinely is incredible just how different the tones are. Both totally usable, and both impressive.

The last feature that highlights how perfect these are for the practice market is that all new Crush users will be given the Orange Rock Guitar Beginner online course available for free. This fantastic little course is an introduction to proper music education, theory, reading notes, reading tabs etc., all a fantastic offering for anyone serious about learning the instrument. More info on these can be found on the Orange site.

It's sometimes the case that solid state amps are scoffed at by gear heads (though some players actually prefer them - Ed), but these new Orange Crush combos do what they do supremely well and really aren't any the worse for not being valve/tube based - not least because one of the results is a really keen price! Created for home use, for practising or recording with your full tone, they do it better than most products on the market, so get down your local dealer and try one out now.