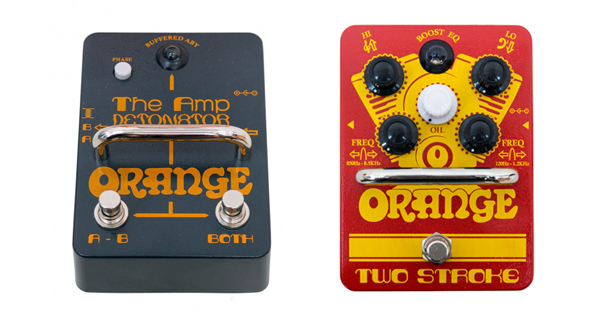 With a name like 'Amp Detonator' it's a little disappointing when you find out what this newcomer from Orange actually does, as ultimately it is just a switcher to change between amps or run two together. It would have been so much more interesting if it really did detonate an amp..! (are you sure of that? - Ed). Still, it made a reviewer's job of describing it easy as what it does is enable you to run a two amp set-up, one clean and one dirty, or one amp purely for effects, or two together for a stereo sound commonly known as an ABY switcher. So what's different about this one? This switcher features two buffered outputs, one with a custom designed isolating transformer, which Orange says it is pretty confident is the smallest active, fully functional, buffered ABY switcher that can also be powered by a 9v battery. The buffered outputs mean that there is no tone loss or lack of clarity over a long cable run and it switches silently between amps.

In use it does exactly what it should - it switches between amps! To be honest I was just having loads of fun playing with a stereo rig, I had one clean amp and one dirty, and it’s interesting how the “popped” notes really ping out from the clean side! Anyway, back to the pedal. Yep, it worked fine. It’s built really well, and hmm, the LED is pretty cool... Seriously, it is well made, looks good, does precisely what it says and does it very well. Nice clear and transparent with no noticeable tone loss despite running a fairly lengthy amount of cable. I can't fault it, other than to say it seems a bit pricey, but if you are after a superb quality switcher, this has to be high on your list.

We've all been in that situation where you are playing with a clean tone but you just need a little “more”. Your solos are getting lost, the rhythm sound isn’t quite cutting through - something is just missing. It's exactly in this scenario that a clean boost can come into play. A good one will just drive the front of your amp a little to give you a bit of dirt - not crunch or distortion, just a bit more, but it should always be transparent and not really change your initial sound too much unless you wish it too.

Most clean boost pedals are pretty straightforward affairs, offering just on/off and boost control but the Two Stroke from Orange offers a little more. This is a fairly substantial stomp box - the 'built like a tank' classic line springs to mind. The controls do look a little daunting on first glance but after a little play it's fairly straightforward to work out what does what. Combining an active dual-parametric EQ and up to 12dB of output boost the Two Stroke really is an all singing and dancing boost pedal. In use it's as a good boost should be - clear, focused, transparent and a good musical tool.

I could see myself using this pedal in many different situations. The centre “Oil” control gives you your gain/boost level, you can then tweak the highs and lows plus their individual frequency levels, so you really can sculpt an entirely new sound. The frequency controls are great, meaning you can dial in a sound to really cut through the mix for a great clean solo, plus cut the low end to remove any woolliness. Alternatively, you may wish to add a little more bottom end and depth to thicken up the sound of chords - ideal if you are playing as a trio.

The Two Stroke will work fine before or after other pedals or in your effects loop and it's also suitable for bass and acoustic guitars. I played around with this pedal for quite a while and I really liked it. Those cutting Country Rock lead sounds are here in spades, as are the slightly crunchy bluesy chord tones - it never gets muddy or too shrill.

The Two Stroke is a top notch Clean Boost pedal. Don’t be put off by the amount of knobs, even if you just keep them flat and play around with the Oil control your tone will be benefit. The amount of tonal options on here should keep even the pickiest of clean boost fans happy for a very long time.