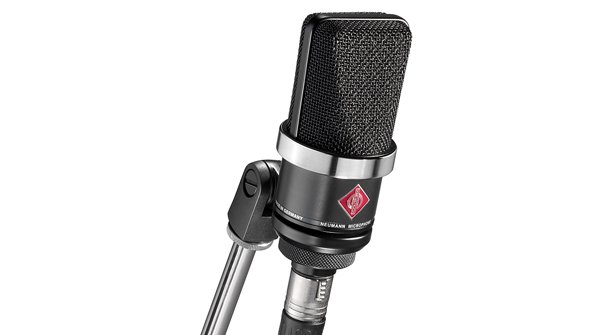 It sometimes seems as though many of the world’s microphone manufacturers are obsessed with recreating the designs and characteristics of decades-old classics, and given the recording industry’s apparent matching obsession, this isn’t unreasonable. Of course, when you’re the manufacturer that made many of those classic mics in the first-place, you need to do something new, and from Neumann GmbH of Berlin this gets us the TLM (TransformerLess Microphone) range that’s been around for some years now. I have one of the new TLM 107 multi-pattern microphones to test, alongside the TLM 102 that came out a few years ago.

Transformers play a large part in what we hear as classic sounds; they tend to create non-linearities in response, (distortion if we put it bluntly) and whilst that sounds like something to be avoided it can be just the thing that makes a microphone perfect for a particular job – the “mojo” ingredient.  Sometimes though, we want the increased linearity and increased dynamic range that transformerless circuitry offers, and that’s what the TLM series is about. So - if we remove the tranny, what’s left to make a Neumann special?

The heart of a capacitor microphone is the capsule, which defines how sound will be converted to signal. Support this with electronics that suit its characteristics and you should have a basis for a decent mic. Copies or clones of mics tend to mimic either the design or characteristics of existing models; I mention this because the TLM range has several microphones that aim to deliver the “family sound” of older Neumann mics but with updated specs, but the 102 and 107 models are designs in their own rights. Neither is remotely in the “budget” category unless you compare them with other microphones from Neumann or other upper-tier manufacturers, in which case they may start to look a bit like bargains!

The TLM102 is a fixed pattern, cardioid, large diaphragm condenser mic. It certainly looks like a Neumann, but it’s significantly smaller and lighter than you might expect. There are no switches for pads nor filters, so you literally put it on a stand, point it at a source (it’ll take up to 144 dB SPL, which is loud) and go.

Note that the cost of the mic just gets you the mic in a cardboard box with a stand mount, no fancy case and the optional Neumann shockmount isn’t cheap (I actually use a Rycote shockmount on all of my mics that will fit it).

The frequency response is pretty flat with a gentle presence lift above about 6kHz and it responds very well to transients. Sensitivity and noise are very respectable (though not class leading). So far this could describe many microphones from many manufacturers, and as an advocate of affordable recording gear I honestly believe that it’s possible to get perfectly usable results from a microphone that costs far less than this one does: but there’s a certain quality to the sound of the TLM102 that I find to be quite addictive. The overall effect is neutral, but somehow with added weight and smooth presence that’s difficult to define. Set-up in front of a singer (once they stop giggling about how small it is) it sounds far more expensive than it actually is, it’s good on acoustic guitars (I’d probably use a small diaphragm condenser on a very exposed part though) and worked beautifully as distant mic on a guitar cab. For me the revelation came when I recorded some spoken word tests with a number of different mics that I had lying around. Some mics were better than others, but the best two or three all sounded very good - except that in a very rough-and-ready blind test I chose the TLM102 recordings every time. I couldn’t actually describe the difference, but there was a solidity to the recording that I simply wasn’t getting anywhere else. Very nice.

The TLM107 is part of the same family as the TLM102, but it’s like a bigger, more complex sibling. It’s an all new design, which is just a little quieter and more sensitive than the TM102, though I really didn’t notice much difference in use. Again, the shockmount is an optional extra, and again it worked perfectly well in my go-to Rycote.

The biggest noticeable difference (after you open the fitted wooden case) is that it’s bigger, and it’s got switches. The TLM107 has five polar patterns, from omni through wide/standard/hyper cardioid to figure-of-8. You also get -6 and -12dB pads and 40Hz and 100Hz low cut filters for reducing low-end rumble and mud. Frequency response is again very linear, with a slightly higher presence lift at around 8kHz which lifts vocals but avoids the sibilance band.

Switching is controlled by a small joystick-like navigation switch on the back of the mic; moving it changes the pad, filter and pattern settings, and an LED illuminates for a few seconds to show what’s selected.  My one grumble about the design - I really struggled to read the switch markings on the light coloured body in some light conditions. OK - a couple of days use and you’ll learn which setting is which, but a bit more contrast wouldn’t hurt (the black body mic looks to solve this by the way).

In use? It sounds a bit different to the TLM 102 - but with the same, somehow “better than life” quality. With any mic, and certainly with one in this price bracket, you need to try it to make sure that YOU like the sound. That said, with this sound with these switchable options this could (and in my opinion should) become one of the new-classic studio go-to LCD mics at any price.

These mics are not cheap, and just having the Neumann name on them doesn’t justify the price; the sound quality does that. Oh, and the build quality, and the design. I spend most of my time working with tracks that other people record, and I really can’t justify buying a TLM107, but I’m certainly hoping they might just forget that they sent it to me! (fat chance! - Ed)