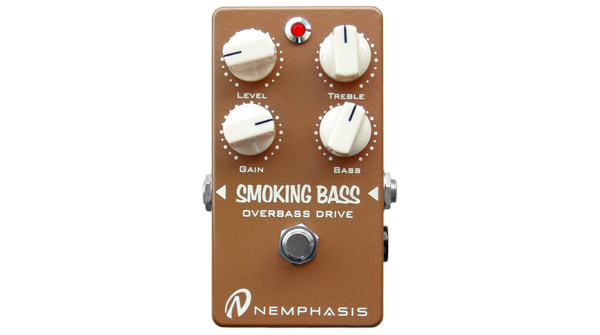 Nemphasis is a new name on the effects market. Hailing from Italy, the company started out as a one man operation but is now stepping up to bigger things. In the weeks to come, Nemphasis promises to have a range of very interesting guitar stompboxes (which we'll also be reviewing) but for now bass takes precedence - and about time too!

Before getting down to each of these true bypass, all-analogue stompboxes, individually, I should say that Nemphasis stresses that it goes to a lot of trouble to source the highest quality components for its pedals. This should have two benefits. The first is that the sound quality should be excellent, which is something we can assess in a review, the second is that they should be very reliable when out on the road which, obviously, we can't.

First up on the slab for interrogation is the Nemphasis compressor.


Serving up some distinctive compression sounds, this analogue compressor pedal is of the 'opto' variety. In short, this works by using an internal lamp and 'sensor' to track the incoming signal and subsequent action of the device has a certain character that is well liked in audio circles.

On board, three nice simple controls allow you to very quickly dial in a mild 'tube-like' rounding of your bass signal. That's not all - you can go all the way up to big squeeze dynamics crushing compression that rewards you with long sustained bass notes with a springy character.

The attack control can be thought of as an effect delay. A very short one, that holds off the action of the compressor for a set time. On higher compression settings, using the 'compress' knob, it is possible to control the level of your initial note attack. With the attack control set low, your bass note attack (especially noticeable when using a plectrum for example) will be softened.

Put simply, the 'compress' control sets the depth of the compression effect - how much attenuation is being applied relative to the input signal. The lower the control, the less your dynamic range is clamped. You can create some really subtle effects with this pedal, just to tidy up your signal a bit when recording or performing or, on much higher settings, you can recreate some very interesting squashed effects, especially in conjunction with the drive pedal we're going to look at next!

Topping off the layout is a master level control for setting the enabled level verses bypassed. The level control serves to balance your volume depending on the amount of compression you have set that by definition will pull the signal downward on heavier settings. Very nice!

Assuming you watched the video first, you heard this one in my introduction bass noodling. I looked for a really sweet spot where I was able to play lightly and have the drive on all the time. The bass signal cleaned up nicely and was particular sensitive to my picking. As I dug in harder, the distortion effect became more apparent - I loved how the chorus effect took on a more three dimensional character as I let harmonics ring through the distortion. Very nice!

Like the VT Comp, the smoking bass overdrive has an all analogue signal path and there's a lot of distortion effect available here. The gain really heats the signal up. This time four controls and, in the same vein, nothing that will require you to grab the manual. A master level control that not only allows you balancing between enabled and bypassed signal, but there's enough output level to stomp on the pedal to be used for solos -  but also for driving an amplifier front end harder too. Great if you have a valve amp!

The distortion has a fat character anyway, but should you need more tone crafting, there's a two band EQ offering control over your bass and treble ends of sound. This is very effective and I felt well placed in the audio spectrum to support a distorted bass sound without making it boxy, nasal or shrill. Take your time to get this pedal to sit in your mix and you'll be rewarded with a fat note, but there's no clean blend here, so watch your low end when kicking the pedal in. That low boost knob should do you just fine.

As I'd mentioned earlier, the Smoking Bass Overdrive sounded great with the Nemphasis chorus pedal chained up too, so we ought to look closely at that too!

And here it is - beautifully laid out graphics on this Chorus pedal that features bucket brigade line analogue circuitry! Think about those classic 'lo-fi' delay pedals of our guitar brethren and you'll know this pedal is capable of thick creamy chorus effects. Once again top quality components installed, so expect rich tones, not muffled or ill-defined.

Three controls on this li'l chap - starting with the depth of the modulation effect on the top left hand corner. You will experience everything from the mildest of detuning to the audio equivalent of watching a drunk on a bicycle with a flat tyre! The speed of which the cyclist is wobbling is on the shoulders of the control to the right that is marked just that, 'speed'. The modulation rate sets from a wide spanning and long sweeping wash to a super fast warble that is great fun, if possibly a bit limited in its use. Somewhere in between though? Very nice!

The FX Level is self-explanatory and is a fairly usual addition on modern chorus pedals. Let's not play down the usefulness of such a control, though, nor the small switch next to it that I feel is a perfect part of this chorus pedal. For us bass players, keeping our bass low end intact is part and parcel of delivering a cohesive bass line. There are times when the 'underwater sound effect' is perfect for the part but thick chorusing on our bass fundamentals can make things sound wishy-washy. Nemphasis has put a high pass filter in the effected signal path of the pedal allowing you to decide how much chorus hits the low end frequencies. The L setting will mean less and the H will give you more!

Rounding up, the three pedals feature all metal casings and a 9v battery is installed in each via removing the 4 screws on the bottom lid. The pedals will run from a 9v supply too.

Overall, I'd say these are three very interesting newcomers, clearly aimed at the player with a more sophisticated ear who is looking for classic analogue sounds. They achieve that aim admirably and, for what are essentially boutique pedals, do so at very attractive prices.