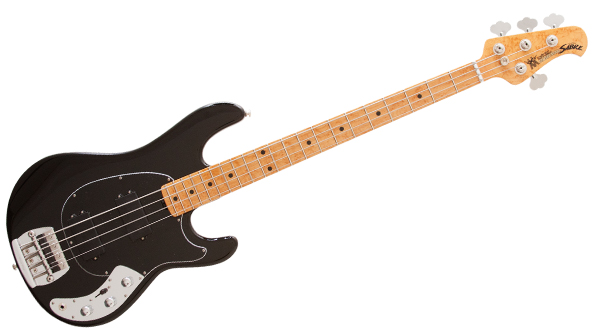 While Music Man's Stingray bass established itself as a classic right from the get-go, the 1978 launched Sabre was a bit less rapturously received. It wasn't exactly a flop for the Californian company but the twin pickupped Sabre just never seemed to establish itself as firmly as the Stingray. None the less, Music Man must have sensed a demand as the company now has it back on the market as the 'Classic' reissue version and we've had one down here in the Bassment to try.

To jump right in at the deep end, acoustically our review bass was resonant and fairly loud in the quiet studio, which is always a good start, but the Sabre's acoustic performance can only hint at what's in store for us with those huge pickups waiting to be let loose when we plug in! Incidentally, on the subject of those pickups, unlike the more familiar Stingray basses, you'll have spotted the Classic Sabre has pickups with covers hiding the pole pieces. Interestingly, it is because the neck pickup actually has eight pairs of poles rather than the eight huge single poles that are seen on a more usual 'ray configuration. Music Man wanted a uniform look apparently, so decided to hide the poles completely. Why the 16 pole pieces? I understand that the original design had eight poles on both pickups and the neck position caused tone issues. I assume this would be because of the magnetic pole pieces pulling on the strings and that the smaller 16 poles would be less of a problem. Either way, both pickups have a big fat sound and that's what you are expecting right? Have a listen to the video and see what you think!

Moving on to the woodwork, the Music Man website describes the Sabre basses as being available with either rosewood or maple fretboards. The neck on our example was enveloped in a high gloss natural aged yellow polyester finish - and just take a look at the beautiful bird's eye maple that stretches up to the headstock too. You can also go for a flame maple wood instead as an option that will look equally tasty.

The ash body of the Classic Sabre is a proven tone wood in my view and although usually a bit heavier than some other choices delivers a big acoustic chime in this bass. I feel that is probably also down to the high quality hardware including that huge bridge piece.

The Sabre's 34” scale is of course very familiar and a standard of many a bass guitar so no surprises there. The neck profile is akin to a classic C carve with a slight shallowing of the profile though it's still a good palmful in width. Players with smaller hands may find it a bit too much but don't rule the Sabre out until you've spent time with it.

When it comes to pickup switching on this bass, it's here that we can enjoy a feature upgrade over the original Sabre bass, but things don't have to get confusing - one single five-way blade switch deals up plenty of sounds. I've made my life a little easier as I've copied this description direct from Music Man:

Each pickup has two sets of coils, 1&2 are in the bridge pickup 3&4 in the neck pickup.

Switch Configuration (all combinations are in parallel):

Once you've found the setting you like the sound of most then it's over to the onboard active EQ for further tweaking. There's a fair amount of boost and cut available, so again plenty of scope for honing that perfect sound.

The Sabre does what you expect from the 'ray range, producing aggressive zingy bass tones when the EQ is hyped a little. The classic 'ray sounds are in there of course but there's a whole lot more available from that second pickup. It is unmistakeably 'ray all the way though!

There's no question regarding the quality of build of any Music Man bass - they really are superbly well put together, always from the finest materials, right down to the choice of sturdy hardware. So what you're getting here is a beautifully made instrument from great materials and components that packs bags of features and a superb range tones from vintage to ultra modern, whilst retaining a character that is very much from the Music Man stable.

I found the only thing to catch me off guard was that although our sample was very well set up, it did seem to fight me a bit, yet I couldn't quite put my finger what it was specifically. I found my playing less fluid than usual. Put that down to personal choice, maybe because in every objective respect this is a great bass.