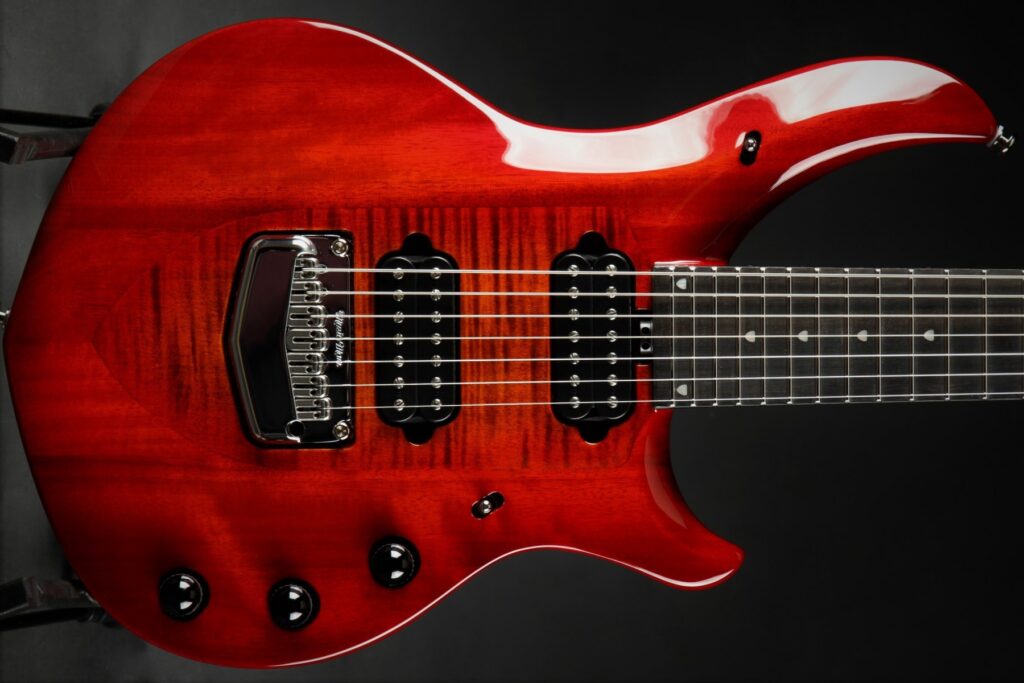 As collaborations go, there are not many that live up to the success of Ernie Ball and John Petrucci's with regards to the Music Man Majesty...and with good reason. The sleek body shape utilizes a neck-through design to give you colossal sustain and killer tone. Couple that with premium tonewoods, DiMarzio pickups with an onboard piezo option, a tremolo bridge, custom switching, and you have a guitar that's ready to rock any stage—even if you can't quite play like John just yet. Nick Jennison reviews.

The electric guitar is a design that has remained largely unchanged since the 1950s. On the one hand, if it ain't broken, why fix it? On the other hand, Lewis Hamilton didn't become a six-time F1 champion in a Benz Patent-Motorwagen. Equally, John Petrucci's genre-defining, boundary-pushing playing needs a state of the art instrument to match, and it's hard to imagine an instrument more suited to the job than his most recent signature guitar - the Majesty.

Sharing it's name with the band that would later become Dream Theater, the Majesty is the absolute apex of ergonomic and futuristic guitar design. Everything from the perfectly balanced body shape to the sweep of the control layout is designed from the ground up to fit Petrucci's body. If you're used to vintage Strats, Teles and Les Pauls, picking up a Majesty can feel positively alien: it's almost TOO comfortable. And then you start playing, and it all makes sense.

The 24 fret mahogany neck is wickedly thin and flat, and the polished ebony board and stainless steel frets feel like playing on glass. If you're looking for a bit of friction and fret grind, you won't find it here, but if your technique is on point then the Majesty is ready for whatever you can throw at it. The upper fret access is almost comically good, and actually quite revealing of how poor the access on most guitars is by comparison - despite there being no reason to, I still found myself instinctively tilting my hand to reach the top frets from years of playing "normal" guitars, and it actually freaked me out a little bit. The tremolo is similarly hyper-ergonomic, with a sensitive and fluttery response and a "palm rest" that feels really comfortable for both fast picking lines and chunky palm muting.

It's become a bit of a running joke how much I switch pickups mid-phrase, but switching ease is a real factor in how much I enjoy playing a guitar, and the Majesty excels here. The control layout, while being a lot more involved than most guitars, is a masterpiece of efficient design. In just two toggles and three pots, you have access to four magnetic pickup tones, piezo acoustic tones (either blended with the magnetic pickups or on it's own output), master volume, piezo volume, master tone and a 20db active boost. Every control is positioned on an arc that matches the natural movement of your forearm, and the pots are push-push instead of push-pull for even faster operation. Even switching multiple functions all at once takes a fraction of a second, which is crucial for a player like Petrucci.

Speaking of tones, versatility is the name of the game here. The updated DiMarzio Rainmaker and Dreamcatcher pickups are actually pretty different to each other, and moving from neck to bridge is almost like picking up a totally different guitar. This jives with Petrucci's tonal philosophy of aggressive rhythms on the bridge pickup and fluid leads on the neck pickup - each pickup is perfectly tuned for it's "role". Don't expect a whole lot of vintage grit and character in either position, but it's a worthwhile trade-off in exchange for some of the most articulate high gain tones you'll ever hear.

For cleaner work, you still have lots of options. The split middle position is clear and bell-like for the cleanest of clean passages, while the humbucking version of this position is great for mid-gain fusion tones. Then there's the piezo. Producing some really rather convincing plugged-in acoustic tones, the piezo can be used on its own or blended with the magnetic pickups for an incredible, larger-than-life "metal" clean. You can even run it to a separate amplifier (or direct) using a TRS cable, allowing you to process the piezo and magnetic pickups separately.

The Music Man Majesty is like a guitar from the distant future. It's crazily ergonomic, ludicrously fast and excels at every extreme of the tonal spectrum. If you're an "edge of breakup" fan, or "Les Paul-into-a-Marshall" type player, you might find it a little cold, but if you're into the kind of heavy, technically demanding music Petrucci favours then the Majesty is the absolute top of the mountain.