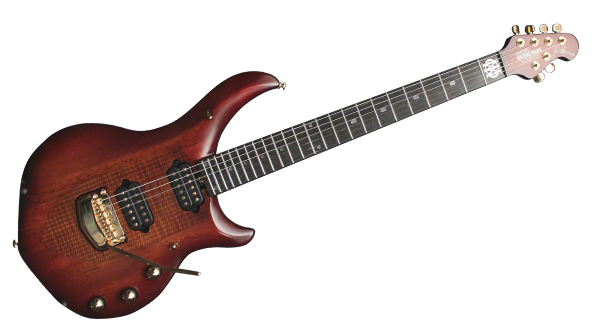 We're unashamedly back in John Petrucci country in this review, this time with two new additions to the Music Man range - the JP15 and the Majesty Artisan. In theory, the collaboration between one of the world's most accomplished guitarists and one of its most acclaimed guitar makers should be like a Ferrari designed by a Formula One champion. But are they? Tom Quayle finds out.

John Petrucci switched to Ernie Ball's Music Man guitars so long ago now that there is a whole generation of guitar players that have never seen the great man playing anything else. In those years the company has released quite a number of iterations of this highly popular signature guitar with the two latest models being the JP15, a 2015 update of the regular JP shape, and the Majesty Artisan, an update of the Majesty guitar released last year, featuring different wood combinations a translucent finish. First up we checked out the JP15.

The JP15 is the 2015 variant of the original John Petrucci signature model and updates the range in a number of really useful and visually attractive ways. Unlike the original JP model that featured a basswood body, the JP15 is constructed from African mahogany with a roasted maple top and neck. This is the first JP model to feature roasted maple, said to offer far greater stability than regular maple as the wood is essentially ‘baked’ to remove the vast majority of the moisture and prevent it from moving. This allows for the use of highly figured maple variants, without the stability penalty that such woods often suffer from and the JP15 is accordingly available with stunning quilt and flame tops and a gorgeous birds-eye maple neck.

Hardware-wise the JP15 is identical to the other models in the range with locking Schaller tuners with pearl heads, stainless steel frets, DiMarzio Illuminator humbuckers and a custom designed JP floating bridge with piezo saddles and active pre-amp. Like the rest of the JP guitars, the 2015 version is a very versatile and well specced guitar designed to serve John in the huge range of sounds used in the average Dream Theater gig or album and is available in both 6 and 7-string variants.

To control all of these sounds there are a pair of three-way switches, one for standard pickup configurations, the other for mixing in the piezo sounds, offering combinations of magnetic and piezo tones or soloing of each as required. The standard tone and volume controls are also present with the push/push functions on the tone and volume controls, offering split single coil tones in the middle position and a 20dB volume boost respectively. There is also a volume control for the piezo pickup and dual outputs for sending the magnetic and piezo outputs to separate amps or out of a single output in mono mode if needed. Finally there are EQ controls for the active piezo pre-amp on the rear of the guitar, accessible with a small screw driver as they are recessed in the backplate.

Construction of all the JP models is second to none and the JP15 is no exception. The guitar feels professional and high end in every way, easily as well made as any of the ‘custom’ models available from other premium builders. The stainless steel frets are beautifully cut and polished for a super-slinky feel that is hard to forget once you’ve tried them. The neck features a gunstock oil and hand waxed finish that is luxurious and smooth in the hand and matched with the 17” radius and outrageously comfortable back profile provides one of the most comfortable playing experiences I have ever had. The body has a matte finish that compliments the highly figured woods without being over the top or sticky and matches very well with the neck in terms of looks and comfort.

The JP15 is about the same weight as the basswood models even with the mahogany body and at around 3.29kg this certainly isn’t a heavy guitar and balances very well either sat down or stood up. The floating bridge is a very good two point design offering great tuning stability and doesn’t seem to inhibit any sustain or tone at all.

A quick strum straight out of the case highlights a very resonant and surprisingly loud acoustic tone that bodes well for plugged-in sounds. Through our studio amp the JP15 sounded every bit as impressive as it looks, with a range of fantastic clean and driven tones with excellent dynamics and sustain. The piezo pickup does a superb job of producing acceptable acoustic tones, especially for strumming and can be seen as a very good alternative to having a real acoustic on stage, offering a great addition to the clean tones on offer. A personal favourite was the middle, split position combined with the piezo for some truly stunning clean tones that were pure Dream Theater, especially when supplemented with some delay and chorus.

The JP15 is a really fantastic and versatile guitar. It commands a high price tag but more than justifies itself with a combination of amazingly comfortable playability, great tones and modern hardware. Even non-Petrucci fans should consider this as their high end guitar of choice, it is just a fantastic instrument regardless of whose signature is on the headstock.

The Artisan Majesty is an update of the version released in 2014 and features some significant differences from the original design. Visually the guitar is the same unique shape with the exaggerated contours and horns compared to the JP models but, unlike last year’s basswood model, the Artisan version features an African mahogany body matched to the same laser etched maple top, Honduran mahogany neck with and ebony fretboard from the original. Hardware is identical to the JP15 model above with stainless steel frets, locking tuners, Illuminator humbuckers and floating bridge with piezo saddles. The controls also function identically with the same 20dB boost on the volume pot and split coil option on the tone pot plus the piezo volume and EQ controls on the back. The only marked difference in hardware is the removal of the dual output jacks in favour of a single jack that can be switched between stereo and mono operation via a push/push function on the piezo volume pot.

The Artisan Majesty is a stunning looking guitar and a little easier on the eyes than the original, thanks to the translucent finishes showing the lovely mahogany grain and flame maple top. The same laser etched shield is still present and looks great, offering a futuristic carbon-fibre effect to this already modern looking instrument. The addition of gold hardware gives the Majesty a majestic (excuse the pun) look and the five different finishes are all attractive and more understated than the previous opaque colours offered on the 2014 model. As with the JP15, the Artisan is available in 7-string variant too for those that require the extra bottom end.

As expected, the build quality is exceptional with the same level of fretwork, finishing and hardware installation as the other models in the JP range. The neck profile is a more uniform C to D shape compared to the JP15 that features a rounder shoulder on the top than the bottom part of the neck. The same 17” radius is utilised, so comfort for faster playing is top notch, although it may be worth trying both guitars as I found the JP15 neck more comfortable overall, but this will vary from player to player depending on their preferences. The Majesty body shape is also very comfortable thanks to those body contours and the rounded nature of the horns is particularly impressive in design terms, offering extreme access to the 24th fret that other guitars can only dream of, aided further by the thru-neck construction.  Weight wise this guitar is actually a little lighter than the JP15 model and therefore feels very comfortable for extended playing sessions either stood up or sat down, a good thing seeing as the average Dream Theater gig is over three hours long!

Tonally the Artisan Majesty is another superb performer from the company and every bit as versatile thanks to the split single coils sound matched with the dynamic and very balanced tonal output from the Illuminators. The sound is very similar to the JP15 model but with a little bit of a darker and warmer tone. There is little to choose between them other than that so the choice will come down to a visual one and which body and neck suit your playing more.

The Artisan Majesty is another superb guitar from Ernie Ball Music Man. It’s an expensive option of course, but just as with the JP15 it more than justifies the price tag thanks to excellent construction, hardware, tones and playability that are right up there with any high-end guitar on the market. The unique design should help it to stick out from the crowd yet the Artisan should appeal to a wider market thanks to the classier, more vintage finishes and less ‘metal’ look and feel.