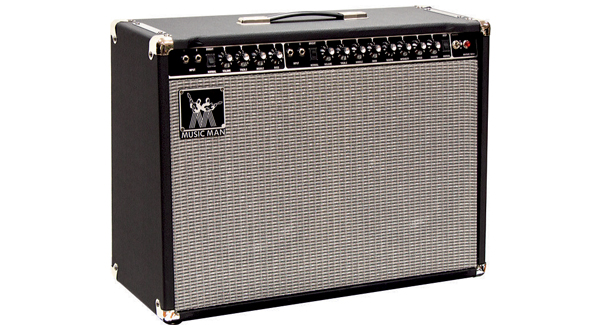 The original Music Man amplifier was produced in the mid to late '70s from a design by ex-Fender man Tom Walker, and was called the ‘Sixty Five’. It was the first product of the new Music Man company formed in 1974 with another former Fender employee, Forrest White and, of course, Leo Fender himself. The history of the company, and of Leo's involvement in particular, eventually became quite complicated, but suffice it to say, the Music Man amps, notably the guitar combos, became very popular, particularly among professional players and especially among the Country fraternity, who enjoyed their reputation for sparkling clean sounds and extremely high output.

The original amplifier was an interesting design for the time since it contained a solid state pre-amp based on the new ‘op-amp’ circuits that were coming onto the market, matched to a traditional tube based power stage but like most amps made back then, by today's standards, they were expensive to build. That, coupled with internal company problems, led to the cessation of the Music Man amp range in 1983 and in 1984 the company, which was by then in deep trouble, was purchased by the string maker, Ernie Ball. Sterling Ball (the current owner of the brand) states that he has often been approached to re-introduce the Music Man amplifier range but he struggled to find anyone that would do the original design justice, but when approached by Marco Di Virgillis, of Markbass and DV Mark amps, he felt he’d found the perfect partner. The new range was announced with a fanfare at the 2014 NAMM show in California, but supply has been so limited that it has taken a whole year before we have been able to get our hands on one to find out what the reincarnated amps are actually like.

For our review Music Man sent us a 212 HD130 combo featuring the same solid state pre-amp design matched with four EL34’s and a single ECC83 driver in the power stage for an impressive 130 Watts output. The amp features two identical sounding channels except for the included Tremolo effect and Reverb on channel two with controls for Intensity and Speed. Each channel has two inputs, Volume, Treble, Mid and Bass controls and a Bright/Normal switch. For the power section there is a global master volume control and a Normal/Deep switch for taming or adding bottom end resonance. Since the amp is designed to be pretty much clean all the way up there is no effects loop, but to bring things bang up to date the new model features two custom designed 12” DV Mark Neoclassic neodymium speakers. This technology allows for a super-lightweight speaker - obviously a bonus for a 2x12 combo like this, offering lighter weight speakers that sound and respond like traditional ones. As a consequence, this large 2x12 combo weighs just an impressively manageable 19.6kg.

Also new is a switching power supply allowing the user to move from 120V to 240V as required with the flick of a switch, facilitating use of the amplifier anywhere in the world. Finally a footswitch can be purchased separately for switching reverb and tremolo on or off on channel two.

Judging from our sample, build quality on these new combos is superb with extremely solid construction and components that should offer the same reliability much revered back in the 1970s and '80s. All of the controls are responsive and solid and the closed back offers a lot of protection for the internal circuitry and tubes. It’s also very refreshing to pick up a combo of this size and not feel that your back is under threat or to keep looking at the carrying handle with suspicion!

Plugging in a Strat-style guitar with two single coils and humbucker in the bridge to channel two it is immediately obvious that this new combo is all about those clean tones. It’s a loud and immediate sounding amplifier with amazing dynamic and pick response that is screaming to be a base for pedal board players. Both channels will break up quite a bit if pushed hard but there is an incredible amount of clean headroom available here thanks to that quartet of EL34 tubes. The sound is familiar but the solid state front end gives it a unique character all of its own, especially in the attack of the tone which seems faster and more forgiving than some equivalent all clean tube amps. The speakers sound great, with plenty of bottom end thunk and clarity, especially with the bright and deep controls engaged. The three band EQ works well to produce a bevy of musical tones with a lot of range for each control allowing accurate shaping as required. With a drive pedal and delay plugged into the front end the superb clean base offers a great platform for getting the best from pedals and it’s surprising how the solid state front end reacts every bit as dynamically as a tube amp. The onboard Reverb and Tremolo effects are lush sounding, although for the price of this amplifier, they really should have including the footswitch.

So what do we make of this reintroduced, and just ever so slightly remodelled, classic? Well, the new 212 HD130 combo is a very impressive package, especially for those looking for a great clean base for pedals. How well it will compete in an already crowded market of relatively expensive, high-end clean amplifiers is anyone’s guess but for those worried about the lack of a tube based pre-amp, rest assured that these new amps perform very well. The only concern for the Music Man range is whether it can find its place with anyone other than existing fans of the original models - only time will tell. In the meantime I recommend that you check one out!