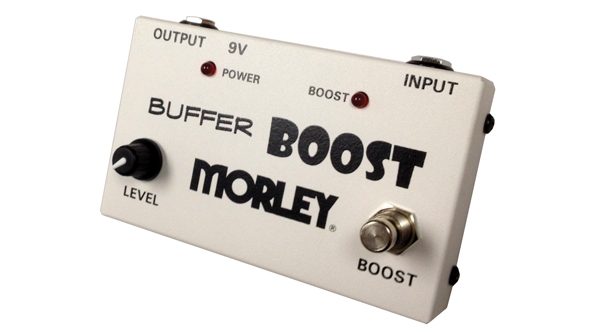 Like a lot of players, I've always associated Morley with wah and volume pedals, but Morley also has a wide range of very useful guitar signal based tools such as A/B switches, power blocks, effects loop correctors and much more. So I was very interested when our Editor breezed in one day and asked me to take a look at two less common products from this wide range. I'll start with the Morley Buffer Boost pedal.

This pedal provides a clean boost of up to 20dB to your guitar signal, which is very useful for solo boosts, or it can be effectively used in a long pedal chain to keep the guitar signal up to strength, with a push in order to maintain the original frequencies and volume. This is a common problem when using long cables and signal chains, resulting in some of the frequencies losing signal strength. The Morley Buffer Boost is a clean solution to this problem.

The pedal sports a single volume knob which adjusts the amount of boost you desire: anything from 1db through to 20db can be achieved. On the right hand side we have the on and off switch for the boost to be engaged. The pedal features two red LED lights, one of which signifies if power is being delivered to the pedal and the other which tells the user if the effect is on or off. The Buffer Boost also features one input, one output, a 9 volt adapter in and 9 volt battery housing.

The pedal is built like a tank, in true Morley style, using cold rolled steel and the only small downside I can see is that it will take up a fair bit of space on your pedal board compared to other stomp box models.  Morley's website also states that the pedal comes with a two year warranty. We doubt they'll get many takers - Morley has a bomb-proof reputation.

It is important to remember this pedal isn’t really an effect as such, there is no major change to the sound when engaging the pedal, which is the beauty of it. It's an effective tool that doesn’t cloud your desired overall tone. However, I discovered whilst filming the review for this pedal that if I turned the pedal's volume knob up enough it could be used to overdrive the amp slightly by pushing the amp's front end. Because the pedal doesn’t colour the guitar's overall tone too much you get a very nice transparent, rounded overdrive. I could see this being very useful if you are playing a show and found yourself presented with a one channel amp, or something that isn’t known particularly for its overdrive features. This pedal could be used as a volume boost for solos, while also getting a bit more grit in your tone if you so desired.

One other thought is to warn people not to be over impressed by fancy graphics and styling. This Morley pedal is as plain as a pikestaff. It isn't covered in fancy decals, it doesn't look like it cost an arm and a leg (which is fine, because it doesn't). But make no mistake, this is a thoroughly professional piece of equipment where the money has been spent on quality and sound. So whether you're looking for a solo boost on a single channel amp, or looking to keep your guitar signal consistent in a long set of true bypass pedals, or looking to find a way to drive your amp without colouring your guitar’s original signal too much, then the Morley Buffer Boost is for you. This is a simple, ridiculously affordable and very effective all around tool for the gigging or studio musician. Go check one out now!

Unlike the Buffer Boost, this Morley is designed as a real distortion pedal, as opposed to a signal booster, and it offers the user a nice clean distortion and a boost option if you want that extra volume when going for a solo. It could be used as a stand-alone unit alongside a clean sound on the amp, or it could be used to push an amp’s overdrive channel to tighten and enhance the overall tone of the drive.

The pedal features three knobs which control drive, tone and level. We'll look into these controls in more detail in a bit. Built into that typically tank-like Morley casing (you can tell these guys cut their teeth meeting the demands of pro players!) the pedal offers input, output, 9 volt adapter input, and a 9 volt battery housings on a plain looking exterior. There are two LED lights that signify if the distortion effect is on or off, and also let the user know if the boost is enabled. The pedal is quite large for a distortion pedal, but, as I say, it's incredibly well made, which justifies it.

It also has another trick up its sleeve which, again, shows the market Morley is catering for. If you have a large pedal board (as most pros do) this stompbox has its own ‘true tone buffer’ which helps keep the guitar signal consistent through long cable runs without losing the guitar's tone and level.

OK, now let’s take a look at those three knobs. This Morley pedal very much works like a classic tubescreamer. The drive knob controls the amount of distortion, how saturated the tone sounds, so at low settings we can get a nice clean crunch and at higher settings we can get a smooth saturated tone ideal for leads. The tone knob controls the higher frequency cut or boost, at low settings we can get a very mellow and warm distortion tone whilst boosting the tone to its fullest setting we can get a very cutting tone with a presence in the upper middle range. The level control adjusts the pedal's output, this can be used to balance the pedal with other effects in your signal chain or you can use it to drive the front end of the amp. For our video I used the overdrive channel of my amp but with the gain set quite low as a base sound, then I really enjoyed keeping the drive knob in lower settings whilst keeping the level boosted, this really tightens the bottom end which cleans up the distortion and creates a very cutting tight tone which is very useful for hard rock and metal styles. I find that the parameters of the drive, tone and level controls on this pedal are quite subtle compared to some of its contemporaries such as the Ibanez tubescreamer, which may appeal to some people, or may not. The subtleness of this pedal shouldn’t be viewed as a negative, though, as the pedal doesn’t colour the guitar tone too much even at extreme settings and that is a positive quality.

The Morley Man FX Distortion Boost pedal's next feature is the boost function which can only be activated when the distortion is engaged. This provides a volume boost which is useful for solos and cutting through a dense mix. I also feel that the boost function thickens the tone a little. My sense is that if you used this at high volumes in live settings, putting this pedal in front of the amp with the boost section engaged would really drive the power amp into a silky, sustaining, smooth and saturated distortion that is bound to melt faces (see what we mean? Ed).

One thing I look for when trying distortion or overdrive pedals is playability, how much does it affect my playing technically and on a feel-based level. Some distortions can be quite unforgiving and some can completely transform the sound into something unrecognizable from the original guitar signal. The Morley Distortion Boost has a really transparent distortion which keeps the sound of your fingers and guitar intact, which makes it feel great to play through. The pedal doesn’t compress as much as some distortions do, meaning it is possible retain dynamics even at high drive settings.

If you are looking for a pedal to tighten up your driven rhythm tones, or looking for a pedal that boosts and then boosts some more, then the Morley Distortion Boost is well worth checking out. Whilst the pedal is quite large it won’t make such a large hole in your wallet. Bear in mind what we said about the fairly laid-back looks of the Buffer Boost versus its exceptional build and tonal quality - the same is even truer of this pedal. It may look plain, but inside it's a monster - and we think it's great value for money, too.