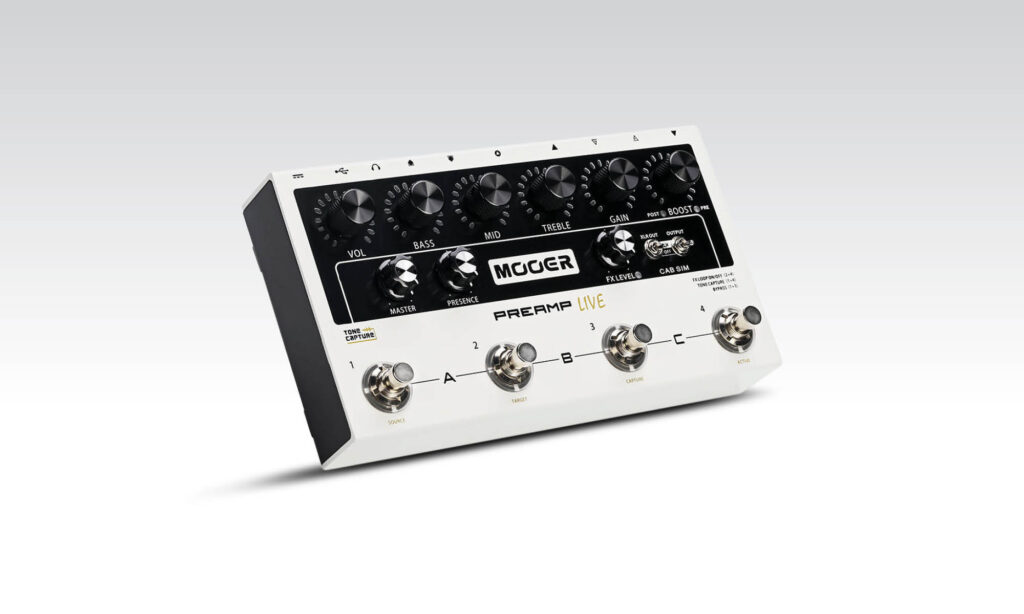 Through the USB editor, you can access any of the 50+ preamp models, along with a plethora of cab, mic and power amp models. You can also load your own IRs, if none of the onboard models take your fancy. There’s also a mobile app, which connects via Bluetooth.

All of Mooer’s awesome preamp models in one unit

Ridiculously smart functionality without sacrificing ease of use

Nick Jennison takes a look at the latest release from Mooer in the shape of Preamp Live. Featuring four footswitches, that effectively act as Channels, with 3 Banks for a total of 12 switchable Preamp options on the fly the Preamp Live from Mooer could very well be the ultimate digital preamp modeller for any situation.

The incredibly popular Micro Preamp series of pedals represented a quantum leap forward for Chinese pedal giants Mooer. Once known for cloning popular circuits in micro-sized enclosures (popularising the format in the process), the Preamp series offered a novel approach to amp modelling. They’re affordable, portable, super intuitive to use, and most importantly they sound very impressive.

The Preamp Live represents the next step for this series by offering the entire range in a single box, along with an unprecedented amount of clever functionality. Superficially, it offers the user twelve presets, each of which can be any preamp from the range. There are also a choice of two boosters - either a mid-humped pre-boost for goosing the preamp, or a completely clean post-boost for a straight up volume boost - and two noise gates, pre and post. All of these features (and their settings) can be stored per preset, and the booster can be turned on or off by tapping the preset button a second time. Each preset has independent gain, three band EQ and output volume, and there’s a global presence and volume. It’s very well thought out and super intuitive to use.

In terms of connections, there are both 1/4” and XLR outputs, with switches to enable or disable the cab sim on either. This would, for example, enable you to send the cab-sim-enabled XLR signal to the PA while running the 1/4” out to your amp’s FX return without the cab model colouring your tone. All this without having to delve into a single menu. There’s MIDI in and out, so the Preamp Live can integrate with your rig either as a controller or being controlled by, say, a GigRig/Boss ES-8 etc. There’s also a headphone jack, a USB connection (more on this later) and an FX send and return.

The FX loop is very, very smart. There are two modes of operation. Mode A functions essentially like a conventional loop, allowing you to patch in your favourite pedals after the preamp but before the power amp and cab sims. Mode B allows you to patch in your amp’s own preamp, allowing you to switch between using the modelled preamps and the physical preamp in your amp with the touch of a single switch, and you can still use the boosters, noise gates and cab sims with both. Incredibly cool.

Connecting in this way also enables the use of probably the most impressive feature of the bunch - tone capture. Essentially, you find a preamp model that sounds close to the way your amp sounds. The Preamp Live amylases the two sounds, and using digital witchcraft it adjusts the model to sound frighteningly close to your amp. You can then save the result as a preset and use it without having to take your amp with you. We did it in the accompanying video with a Laney Lionheart and the results were jaw-dropping.

Through the USB editor, you can access any of the 50+ preamp models, along with a plethora of cab, mic and power amp models. You can also load your own IRs, if none of the onboard models take your fancy. There’s also a mobile app, which connects via Bluetooth.

With the massive selection of superb preamp models along with impressive connectivity and functionality, the Mooer Preamp Live is a serious contender in the world of amp modellers. There are no built-in effects, but you could have a Preamp Live and an Ocean Machine for significantly less than the price of even the most affordable pro-level modeller. Highly recommended. 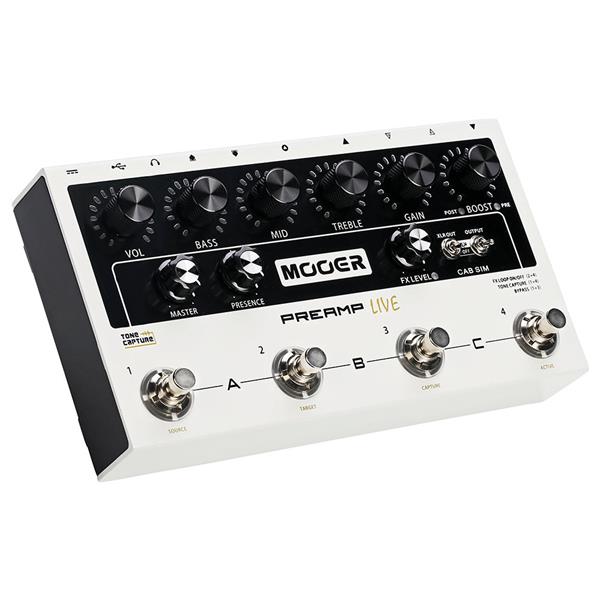 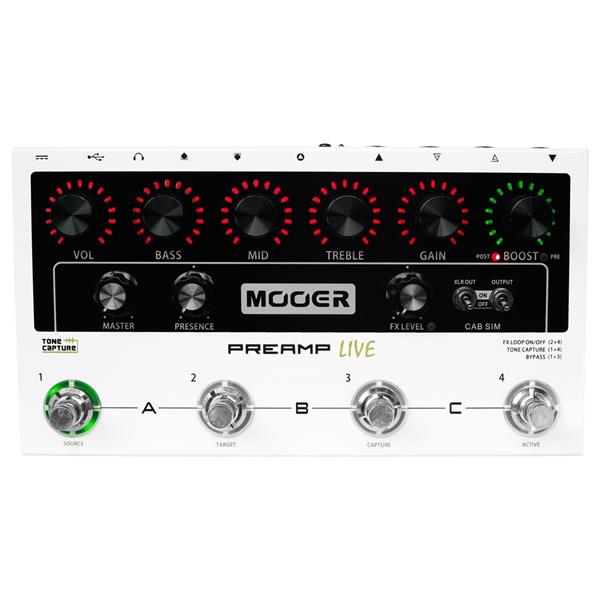 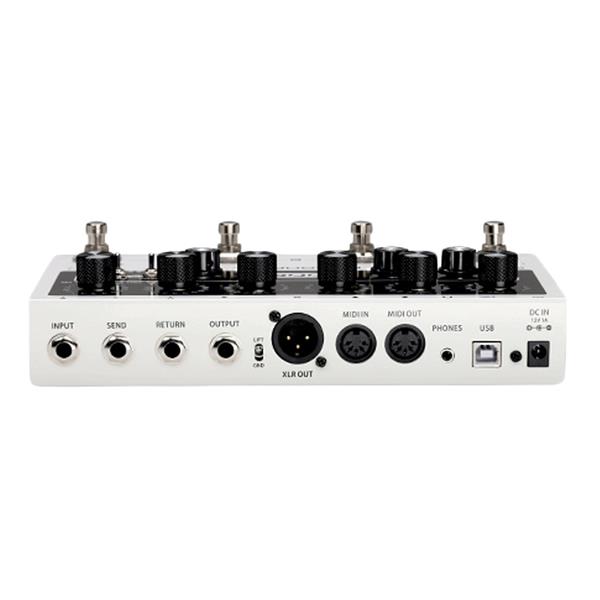 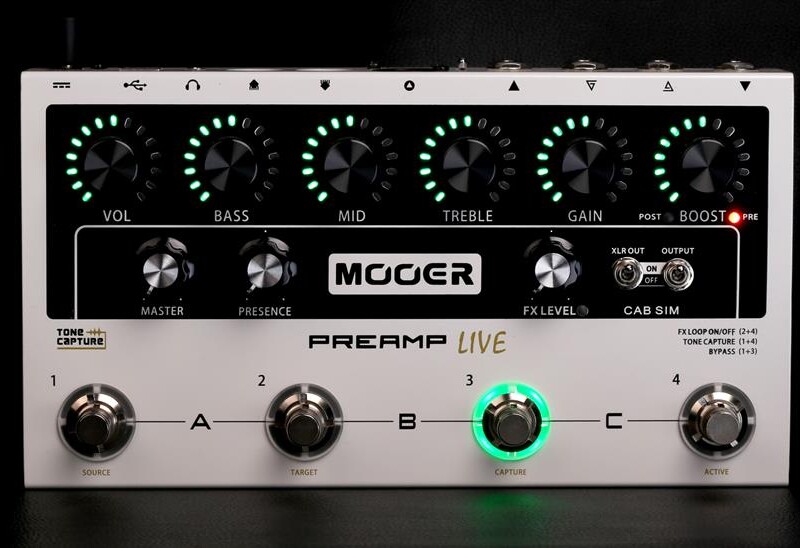