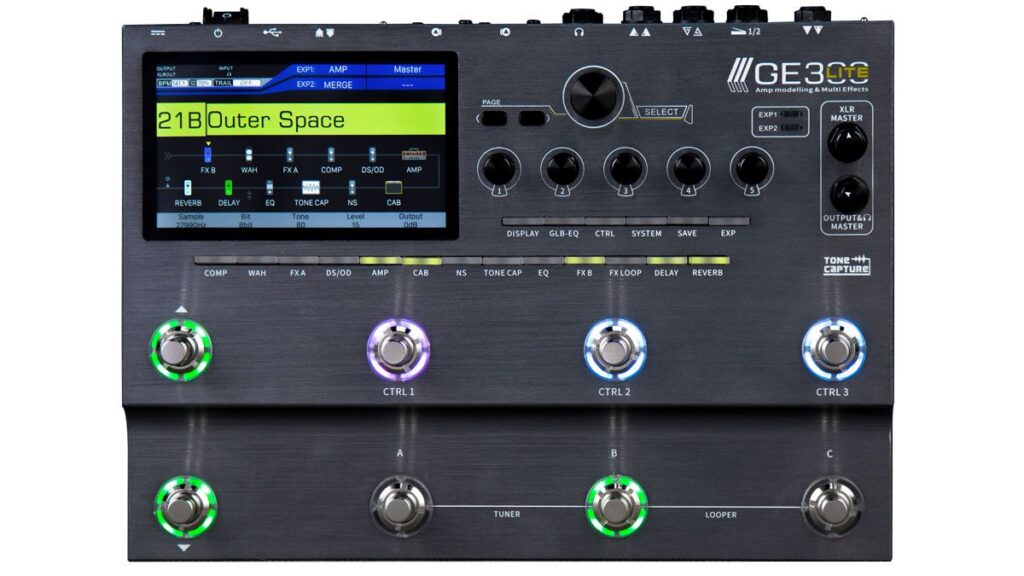 Sam Bell reviews the GE300 Lite by Mooer. Billed as the ultimate portable guitar station for any guitarist, whether in the studio or on the stage and featuring 108 digital amp models based on Mooer's non-linear amp modelling technology, 43 factory cab sims, full-featured IR loader, and a full complement of classic and modern effects, the GE300 Lite gives you the best of Mooer in a new compact package.

Mooer is quickly leading their way to creating some of the most affordable Guitar effects units on the market. Starting with their vast range of micro pedals all the way through to their multi-effects and amp modelling unit the GE300. In this review, I had a chance to check out the latest offering from Mooer, the GE300 Lite, which is technically very similar to the standard GE300, except its smaller. How much smaller? Well, I can legitimately fit it in my gig bag, from the starting gate this unit is going to be very popular with travelling musicians needing all their sounds on the go.

The GE300 Lite features 108 Amp Models, 43 IR based Factory Cab Sims (also the ability to load up to your own Impulse Responses onto the unit), 13 effects block per patch, up to 255 patches which can be controlled via 3 control switches. There are also 164 high-quality effects, which can easily be accessed for in-depth parameter editing. There is also a TONE CAPTURE feature which allows you to capture your favourite amp, guitar or effects sounds. And if that's not enough, its got a fully functional Looping feature within each pre-set for easy looping and practice.

The unit has a quality array of in's and out's as expected from a modern modelling/effects unit, stereo XLR and ¼ Inch Jack out, FX Loop (so you can integrate your own pedals alongside the unit and control them in the patch. There are also two expression pedal inputs to expand on the three control switches that you already have access to. The expression pedal inputs allow further control of Wah, Volume and effects parameters, further expanding this already packed full of features unit!

Navigating the GE300 LITE is super simple, each effect block (including Amp, Cab, EQ etc) can be accessed with their own individual switch, making the blocks easily accessible on the go. Then the parameters of each block can be manipulated via 5 sturdy parameter knobs and the main selector knob. The depth of each effect/block's parameters is definitely in-depth, there's so much to go at with just the amp modelling and CAB simulations alone, including the ability to change the Power Amp Valves/Saturation of Amp Models or moving two different mic placements on any given cab.

The amp models and cabs themselves sound great; they feel as real as you can get, they are all based on well-loved classic and modern amps. The amp models also boast some particular amps that are rarely seen on other amp modelling units, of course the names have been changed for legal reasons, but it's very easy to find the specific amps you may be looking for. Everything from warm and crisp clean amps to full metal and everything in between, the GE300lite has it.

The effects pedals within the unit are extensive, there is a lush range of Reverb's and Delays, and Moore's own signature synth emulations. Each of these of course just like the amps and cabs are easily edited, featuring lots of easily accessed parameters that give you further tonal flexibility. There's also a range of boosts, drives, compressors, EQ's, a healthy amount of Modulation style effects and much more.

The presentation and build of the unit is quality, and the screen makes for easy navigation, nice and clear for onstage use. The build feels very sturdy and like I've already mentioned it's a very small unit (hence the 'LITE') It has everything its bigger brother has, except for an expression pedal. I think this unit is certainly worth a look for the discerning travelling guitarist looking to keep their tone close to them at all times. Go check it out!