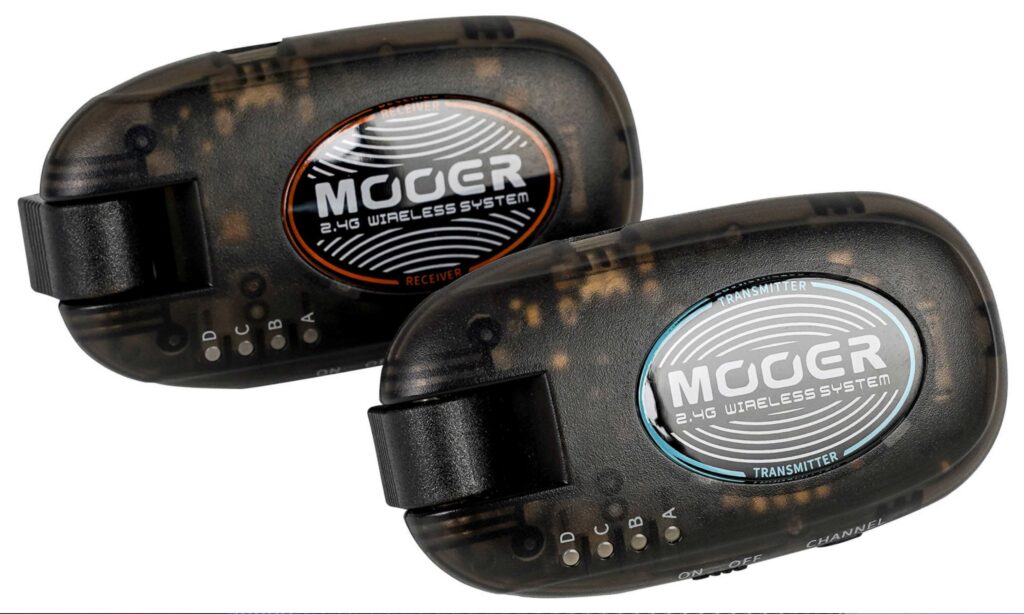 Nick Jennison reviews the Mooer Air Plug wireless system. Allowing you to maintain a consistent signal between your guitar and your pedalboard/amp, the Mooer AP10 is based on the architecture of the reliable Micro Series and is an equally dependable, portable solution, providing a 5-hour battery life and has a range of up to 90 feet. You won't have to worry about tripping over your cable while performing ever again!

One of the difficulties of reviewing wireless systems is that the good ones don't actually DO anything. What I mean by that is, they transfer your guitar tone unmolested from your guitar to its destination - free of excessive latency, compression, noise or tone loss. It's quite hard to make an excellent wireless system sound exciting because you don't WANT a wireless system to be exciting. You want it to work. Imagine an "exciting" wireless system, that occasionally went rogue and uploaded your playing to TikTok…

Mooer's AP10 is everything you could want in a wireless system and nothing you don't. Taking the form of two "bug"-style units with rotating jacks, you plug the transmitter into your guitar, the receiver into your pedals/amp/interface and you're off to the races. My name's Nick Jennison for Guitar Interactive: I'll see you next t...

Ok—there's a little more to it than that, but you get the picture. For example, unlike systems of old that shared a similar form factor, the AP10 is a 2.4GHz digital system, meaning it's immune to interference from passing taxis and free to use worldwide without a license. It has an integrated lithium-ion battery that offers 5 hours of playtime per charge, and means you won't have to constantly feed it AA batteries - a practice that's as bad for the environment as it is for your wallet.

Sonically, it uses 24/48 A/D conversion with a >103db dynamic range, so your signal will arrive at its destination with all of its dynamics and harmonics intact. It also has awe-inspiring latency performance at under 5ms. In a direct test against a system costing more than five times as much, the AP10 held up really very well indeed!

The units themselves are made of a robust ABS plastic, with the inner workings visible through the smoked finish. Maybe I'm showing my age, but this evoked some serious nostalgia for certain electronic toys from the 1990s - I was almost tempted to try and feed it. Build quality wise, however, it's less 1990s toy and more 1990s mobile phone: you won't be breaking this any time soon.

The rotating jack accommodates even the most fiddly guitar sockets, sitting flush on my Silver Sky and in the Tele-style bowl socket of a Godin SG Summit Classic. Off-camera I tried it on a P-bass, a PRS McCarty and a Taylor acoustic, and the AP10 was quite happy to oblige in all cases.

Which leads us to the most appealing feature of this unit: the price. For a wireless system, this reliable and simple to use to cost less than three figures is superb value for money - especially when you have a built-in battery (and therefore no battery doors to break) and >5ms latency performance. Maybe it is a bit exciting after all…