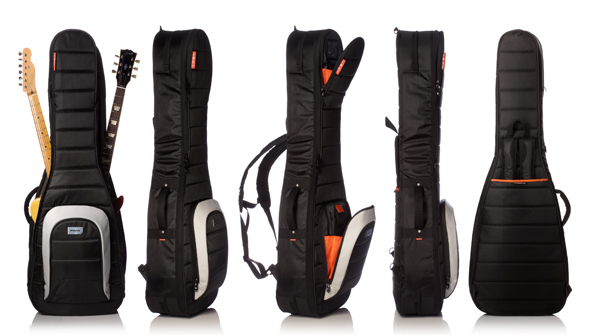 What's the point of having great gear with poor protection? Mono makes some of the most popular cases and bags around and the company has just added a new pedalboard model to its range. We gave a PB3 Pro Pedalboard case plus two Mono guitar cases to see if Tim Slater could rip them apart with his bare hands.

The trouble with hard guitar cases is that they can be either too heavy and/or bulky to transport comfortably between gigs. In these days when working musicians are forsaking the traditional gas guzzling estate car or people carrier in favour of pint-sized eco-motors the need for space is paramount, as is limiting any opportunity for airlines to try and sting you for overweight excess baggage when you take your guitar onboard an aircraft.

If you don't fancy ditching your armour-plated flight case in favour of a 'soft' case or gig bag, rest assured that Mono bags are not your typical soft case. The M8 2G double guitar bag and the M80 Vertigo are both high quality guitar bags that can justifiably claim they are to 'military spec' because Mono apparently really does use steel rivets and quick release snaps from the same supplier that provides equipment for the FBI and US Navy Seals!

The M80 Vertigo owes its name to the guitarist's typical habit of standing their guitar bag upright before impatiently trying to extract the guitar through the top of the bag as quickly as possible!

The Vertigo addresses the quick-extraction factor with a pair of heavy-duty zippers that release a flap that extends roughly the entire length of the neck to the tip of the headstock. Unzipped, the flap drops away leaving the guitar ready to be lifted clear of the bag within a couple of seconds. Besides cocooning the guitar in a thick layer of high density padding, the M80 Vertigo's formidable protection culminates in the thick rubber 'boot' that forms the base of the Vertigo case. Tough and heavily treaded as a tractor tyre, the Boot provides formidable impact protection around the vulnerable area at the base of the guitar that takes the most abuse, you could virtually bounce the Vertigo bag around like a pogo stick and your precious guitar would emerge completely unscathed!

The two guitar sized M80-2G doesn't feature the boot but it nevertheless doesn't give much else away to its stable-mate in terms of generous padding. Compared to the fairly thin padding found on a typical soft guitar case the M80 and M8 both feel as luxurious as a four-poster bed! The 2G Dual Electric features duplicate back to back compartments that both offer padded neck rests that suspend the vulnerable guitar neck clear of the bag's main chassis. In the event of an accidental fall, the neck is held clear of any major impacts that could damage the vulnerable headstock area. The M80 and M8 also both leave enough space around the headstock area to protect the guitar tuners from being snapped off, or even knocked out of tune, should the guitar fall over whilst still in its case. The M8 2G's neck rest features a Velcro tie-down strap (with a handy secret pocket for guitar picks) whilst the M80 is a moulded affair that clamps itself around the guitar neck when the case is zipped shut whilst still suspending the neck out of harm's way.

The M80 and M8 both feature a faux-sharkskin nylon exterior that is waterproof and scratch resistant and with their plethora of generously sized pockets, both Mono cases offer plenty of room for stashing vital accessories like cables, music books and stomp boxes.

And then there are the newcomers to Mono's arsenal, a three-strong array of handy pedalboard cases that are specifically designed to match the Pedaltrain range of pedal boards. Made from the same hard-wearing nylon exterior and plush lined interior as the M8 & M80 Vertigo guitar bags, the pedalboard cases include a huge pocket for storing mains PSUs, cabling and other assorted stomp box related ephemera. The Mono PB3 definitely makes a practical alternative to the bulky and cumbersome semi-flight cases that Pedaltrain products are usually shipped with.

Elegantly designed and very well made, the M80 Vertigo is pretty much as good as it gets in terms of protective transportation for your guitar, unless you opt for a full flight case. The M8 2G and the Vertigo both offer a new way to transport your instruments and whilst neither are exactly inexpensive, they will nevertheless reward your investment by keeping your most valuable asset, i.e. your guitar, in tip top condition. And with most guitarists today lugging round pedalboards, the new PB3 (there are two smaller versions if you have other Pedaltrain versions) does just the same thing for what can, these days, add up to quite a lot of valuable kit on the floor!