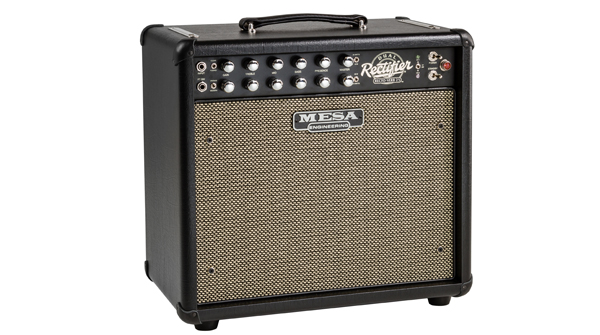 Over the years I've used a lot of products from Mesa Boogie (or Mesa Engineering as they should probably be called). I was a big fan of the US company's rack pre-amps from the '80s, which I shouldn't have sold because they would still sound good today. I still have in a rack full of toys, one of the earliest Tri Axis MIDI pre-amps and when there is road crew to carry my gear, I own and use a few of their cabs too. So it wasn't a culture shock that when this Recto-Verb 25 combo came in for review. I knew I was likely to be impressed. Mesa products are well made, well thought out and nearly always sound good, depending on the sound you are going for.

This amp is derived from the little Mini Rectifier lunchbox amp which has proved very popular because it packs a huge amount of tone in to a very portable package. You effectively get the same tones from this Recto-Verb 25 combo, except with an added onboard foot switchable tube driven spring reverb. I tend to steer more towards digital studio quality reverbs from a pedal in the effects loop of an amp, but for those of you that love that spring reverb sound, this certainly will meet your requirements. If you like genuine spring reverbs, this is as good as it gets. The foot switch to turn the reverb on and off is not included, by the way, but at least the option is there with the jack socket on the back panel.

To handle all this luxurious EL84 derived tone we have an onboard Fillmore 75 Watt 12 inch speaker mounted in a black vinyl covered birch ply cab. For those of you with money to burn, you can order this amp in some custom colours if the standard black is too generic for your tastes. In fact, not only is the Recto Verb 25 available in this combo form, but you can also have it as a head or a rack mounted version.

So what's it like? First, of course, check out the video! In words, the first impression is that this amp is a huge sounding 25 Watts switchable down to 10 Watts, which is still a big sound. Mesa claims that you get a slightly different character between the two. When in the 10 Watt mode, it is more triode in operation and therefore more vintage sounding. The 25 Watt setting is more pentode with more headroom and definition and a tighter bottom end. Both settings sound good, but I prefer the 25 Watt setting with the headroom and definition. That said, the 10 Watt setting makes the amp sound like it's working real hard, which is also a great sound and great for recording at a reasonable volume.

The Recto-Verb comes with a fully buffered effects loop in series which works great. I remember owning a 100 Watt Dual Rectifier head in the '90s and the effects loop at the back was a nightmare, because you had to set the perfect send level and then the perfect return level with two pots on the back panel. Different pedal boards and effects needed this adjusting constantly, and the amp lost its mojo if you got it wrong . On the Recto Verb it's just connect and go. Just how I like it. It works great!

And, of course, we have two channels, each with a different voicing. Channel 1 gives you 'clean' and 'pushed' and channel 2 gives you 'vintage' or 'modern'. Combined with the separate master and gain on for each channel, the scope for different tones and versatility is endless. The only noticeable fly in the ointment was that there is a marked volume jump when switching between these voicings which can catch you out when you first explore. I would have the amp set to my two favourite tones and just leave it, as most of us would, so it's no drawback.

With 12ax7's working at the pre-amp end, and two EL84s in the power amp, this amp is more than capable for all styles. It's more than capable of handling most situations, too. Impressively for such a small package it is loud and it is capable of producing a wealth of tones - all of them of the sort of quality you would expect from this manufacturer. It's certainly true that the Recto-Verb isn't cheap but look inside at how well made it is and compare it with mass produced equivalents. In fact if you've always just assumed Mesa Boogies were out of your league, compare the Recto-Verb with equivalent 'top brand' tube amps and you might be surprised. Compare it with some of the boutique exotica and you might be even more surprised! This is a great sounding, versatile amp with the pedigree of a thoroughbred and you are getting every penny's worth of your money back in terms of build and sound quality.