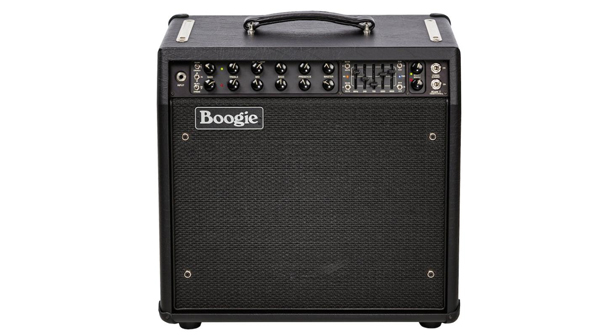 The Mark V has been one of Mesa Boogie’s most successful ever product ranges, being an amp that has garnered rave reviews from the press and players alike and a roster of users that represent the best the guitar community has to offer. The original Mk V featured three independent channels with nine voicings/modes designed to represent the best circuits the company has built in one amplifier with up to 90W of power from its 6L6 or EL34 power section. Since then, Mesa has gone on to release a 25W EL84 powered, two channel version of the amp with some very useful updates and a power section aimed at players who don’t need such an enormous output or quite as many pre-amp options.

For 2016, Mesa Engineering has updated the design yet again, with the brand new Mark V 35, consisting of their patented power amp section using Dyna-Watt technology for 35, 25 and 10W power modes and either Pentode or Triode operation per channel. The four onboard EL34 power tubes can be run as a single pair in Class A/B Triode mode whilst in the 10W mode, or can be run in Class A/B Pentode mode with two in use in 25W mode, or all four in 35W mode. Pre-amp duties are handled by six 12AX7 tubes with channel one offering Clean, Fat and Crunch modes whilst channel two offers the classic Mark IIC+, Mark IV and Xtreme modes for ever increasing amounts of gain and attack.

Both channels feature independent controls for Gain, Treble, Mid, Bass, Presence and Master Volume, plus a very useful mid boost function that can be added using the dual function Mid control. As with both the original Mark V and Mark V 25, this new amp keeps the classic 5-band graphic EQ that has become so iconic on Mesa’s amp range. This can be switched in per channel for some very detailed tonal control with fine levels of cut and boost at 80, 240, 750, 2200 and 6600Hz. Both channels have independent reverb controls on the back panel with an all-tube, long-tank, spring reverb built in for lush and dark sounding reverberation. Each channel also features its own solo boost that can uniquely be set louder or softer than the Master control if required and can be switched in via the included footswitch.

The footswitch offers four high quality switches for channel, EQ and Solo 1/Solo 2 switching. The Solo switches feature convenient LEDs that offer a yellow preview mode to show you whether the Solo function is engaged before you select a channel.

The back of the amp features the usual speaker outs, a tube-buffered FX loop, speaker simulated headphone out and the excellent CabClone XLR DI output from the Mark V 25, but with a couple of cool upgrades. The CabClone out on the 35 amp features three voicing modes - Closed Back, Open Back and Vintage, plus the ability to mute the speaker for silent recording. The CabClone here is one of the best and most natural sounding speaker simulations that I have ever utilised, so much so that our entire review video was shot using this output alone and at all times it felt like playing through a real speaker in the room. Our 1x12 combo features a single 12” Celestion C90 speaker in a nicely compact sized Baltic birch cabinet with a single carry handle on the top.

The Mark V 35 is exceptionally well built with an all-aluminium chassis that feels superbly well put together. The controls are very responsive and interactive with a highly solid feel to all the switches and dials that instils confidence that this is a product that will withstand the rigours of gigging for long periods of time. The front panel layout is extremely easy to get to grips with and less cluttered than the original Mark V that often appeared daunting to first time users. Tone shaping is now a very simple and quick process straight out of the box.

Speaking of tones, the Mark V 35 contains all of the fantastic tonal potential from the other amps in the Mark V range, with a huge palette of sounds ranging from sparkling cleans, tweed-like 'edge of break up' tones, thick crunches, classic Rock tones all the way up to tight high gain madness with gain for days. If you can think of a tone you need you will probably be able to find it in the Mark V 35 thanks to the six voicings and massive versatility of the five band EQ. The inbuilt CabClone is simply fantastic for both recording and headphone practice and gives this amp a significant selling point over the original. The Mark V has always been a very expensive amplifier but, if you factor in the build quality and amazing range and quality of tones on offer, that price is certainly more than worth it, but more of that later!

The Mark V 35 is a great addition to the Mark V line up and fills the gap nicely between the full fat 90W version and the newer 25W model. For those that require a bit more power and like the addition of the solo boosts and further CabClone options, the 35w Mark V is a definite no brainer. Fantastic and highly recommended amp.

Finally, a note about our rating. Generally speaking Guitar Interactive awards a great product four stars. To get Four and a half stars it needs to offer tremendous value for money as well. After much thought and wrangling, we decided that the Mesa Mark V 35 actually does offer great value, providing you look at it the right way. In its basic format, even without the optional fancy woodwork and the famous basket weave grille, it is still a very expensive amp. But price the phenomenal flexibility and Mesa's superb engineering quality against some of the boutique offerings on the market and the picture changes. Very little, if anything, can match this amp's chameleon-like ability to change its tonal nature to suit your demands. Very few amps are built to this standard with such high quality components. As with all things in life, if you want the best you must expect to pay for it and we feel that judged against anything even remotely comparable, the Mark V 35 starts to look like good value.