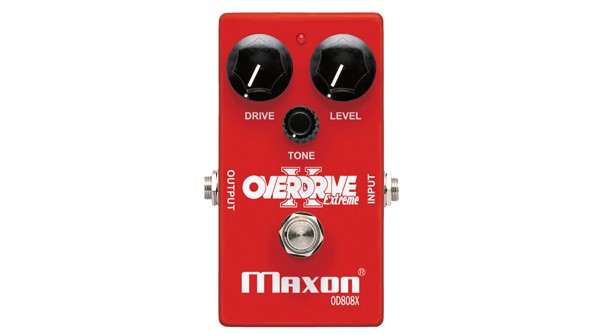 As guitar players, we are seriously spoilt for choice when it comes to overdrive pedals, especially when it comes to the Tube Screamer variety. Back in the mid '70s when the original Ibanez TS808 Tube Screamer hit the market, it was really the only serious choice to kick life into some of the lifeless amps of that period. No, that is harsh of me. Amps weren't lifeless back then, they just needed to be turned way up to get the tubes to start cooking before anything nice started to happen. But put a Tube Screamer in front of your amp, and a whole new world of controllable tone opened up to you. It truly was ground breaking at the time.

Those original issue TS808 pedals, as most guitarists now know, were actually built by Maxon and have now achieved cult status. If you can find one, they change hands for serious money. I am lucky to own one, which I have had for 20 years, and yes, it is a nice sounding pedal, but I wouldn't say it's significantly better than the later TS9 or later still, the TS9dx, all of which I own. In fact out of all the Tube Screamers, the TS9dx version is the best sounding in my opinion. Ibanez took the original version and gave it more of everything with the dx.

Which is exactly what Maxon has done with this OD808x. The company has taken its original 808 classic circuit that guitar players seem to hold so dear, and supercharged it. You know that saying 'Less is more'? Well actually, when it comes to cars and guitars, 'More is more!' It makes sense really. It's better to have 'more' and back it off for less, than not have enough in the first place.

What you get with this Maxon 808x is much more gain than a standard Maxon 808, which is their remake of the original Tube Screamer. There is a wider frequency response with the highs and lows, and increased output. With increased output, you have the option of using the 808x as a semi-dirty booster by pushing the output and backing down the gain, though to be honest you can do this with most overdrives and compressors so it's not such a unique selling point.

As with any type of overdrive, it's all about your core amp and guitar tone. An overdrive pedal is designed to give you more from your amp, unlike a distortion pedal, which imparts its own amount of gain and character. So for instance, if your amp doesn't give you enough singing lead gain, but does do a nice warm crunchy Rock or Blues rhythm tone, then put the 808x in the front end and your amp will burst into high gain life. If you already own a high gain monster amp, then the 808x will just fatten your tone to face-melting amounts of gain that you thought impossible. If you want to go all SRV with a loud valve Fender amp and a good Strat, then kick this pedal in for your solos and you have that dynamic dirt that makes a great Blues tone. It's all about your core sound with this and any overdrive.

I was impressed by the sound of this pedal. So impressed that I sneaked the pedal out with me to try it on a local gig before writing this, with one of my main boards and my early '90s Marshall. Just to let you know that my pedal board currently has a Boss CS2 , a Klon Centaur, a TC Twin Spark, an EP Booster and a Fultone OCD, all in front of my amp. So I have no shortage of drive boost and compression combinations. I swapped out the OCD and put in the Maxon 808x and I found myself stamping on it quite a bit throughout the two hour show. It really lifted my solo sounds, and sounded fantastic on both clean and dirty channels on the amp.  It also stacked really well too. What I mean by 'stacked' is a little trick I do of kicking one pedal into another, which is where the compressors and boosters really excel. It's a balancing act but if you know your gear, the tones are endless. So I was really impressed by how the Maxon slotted in there and instantly added something great to my core tone.

The Maxon 808x is not true bypass, but has buffered bypass switching, which basically means if you use passive pickups and long cables, the buffer in the Maxon keeps your signal how it should be. With the trend for true bypass pedals, you need a buffer somewhere at the front of your pedal chain, and the Maxon is perfect for that.

So a great sounding pedal, to enhance your already cool guitar sound. If you are happy with the elements of your core tone, try to try this 808x with your own guitar and amp. And take your wallet, because you will buy it.