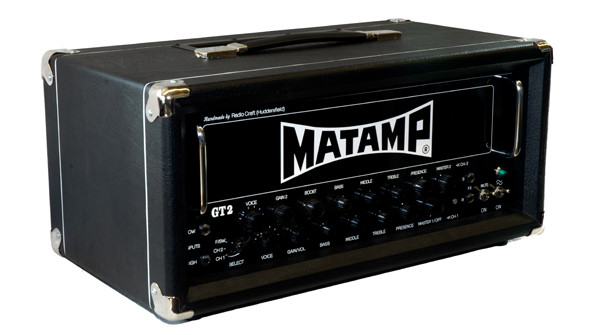 Matamp has been hand-crafting individual 'boutique' guitar amplifiers since long before the word 'boutique' was applied to amps. Rare, individually tailored, a Matamp is as distinctive as an Aston Martin or a Ferrari. We asked Tom Quayle to take a GT2 for a test drive.

Matamp has been in the amplifier business for over 50 years, originally setting up shop in the mid-1960’s in Huddersfield, in the north of England. Over the decades, the company has built a reputation for hand making amplifiers of uncompromising quality, and Matamps have found their ways into the hands of many demanding players down the years, including the legendary Peter Green. In fact, the company holds a unique place in the history of the British amplifier industry, including having been involved in the original success of Orange, though they parted company long ago. Matamp has never made amplifiers by the thousands, preferring to stick to the craftsman approach of entirely hand building individual amps in the old-fashioned way. You won't find them in shops and you won't see them widely advertised. As our editor opined: 'Guitarists have a way of finding about about Matamp when they're ready for one'.

And so to business! The GT2 is a 2-channel, class A/B head available in 50W or 100W variants with four EL34 tubes in the power stage and four ECC83’s in the pre-amp stage. Both Triode and Pentode operation are available and a passive series FX loop allows for modulation and time-based effects with transparent operation. The included footswitch allows for foot-switchable channel select plus voice and boost switching operation.

For a Matamp (they tend towards simplicity of operation), this is a complex amplifier with a multitude of controls but operation is incredibly simple and intuitive, thanks to a very sensible control layout. The clean and dirty channels follow the same basic design with a three band EQ with presence control and independent master volumes. The EQ is neither fully active nor fully passive in an attempt to get the best of both worlds.

Both channels feature a voice control that filters out bass frequencies, the further left the dial is positioned. This is really useful for high output guitars and for detailed shaping of the low end for different cabs and venues. Channel one has a gain/vol control and the master volume can be switched out of the circuit to produce some more tonal variation as required. Channel 2 differs slightly in that it offers a switchable boost function and pure gain control matched with its own master volume control. Low and high inputs, FX loop jacks and power/mute switches complete the front panel design with the back panel housing multiple speaker outputs and footswitch inputs.

The first thing that strikes you about the GT2 is both the weight and build quality. This amp feels like it would survive a nuclear strike and, as with many high output heads, weighs a significant amount. You’ll need to bend at the knees to pick this one up! Every element of the build feels solid and uncompromised with top quality components throughout, including hand-wired turret wiring and an over-spec hand-wired transformer. All the switches and dials feel responsive and firm to operate and the chassis is flawless in its construction and finish whilst retaining a boutique and handmade feel. This high level of build follows through to the included footswitch that is solid and beautifully made in matching black metal.

Plugged into our studio 4x12 cab we started with the clean channel with all dials set to the mid position and I was immediately struck by how responsive and detailed the sound is from this amp. Every note not only sounded great but felt great too as the amplifier picks up every nuance but not in a stiff way like some other hand wired amplifiers. The feel retains a lovely, slightly spongier character but with all the tonal quality and dynamic response you’d want from a great clean amp. The EQ controls, combined with the presence and voice dials allow for a huge amount of tonal variation and whilst it may take a while to dial in your perfect tone (it’s in there somewhere), it’s very difficult to dial in anything unmusical. Cranking the gain on this channel allows for light break up with single coils and a lower/medium gain crunch with humbuckers and the high input jack. This channel also excels with FX thanks to the lack of a cathode bias leading to a channel that is less likely to break up with drive pedals.

Moving over to channel 2 gives a huge range of tones from light crunch or even clean tones to high gain Rock tones that just ooze feel! With a Tube Screamer in the front you can enter saturated territory and thanks to the great and versatile EQ section you can dial in a massive array of tones at both studio and gig level volumes.

Tested with different guitars, the GT2 performed impeccably, allowing the natural tone of the guitar and pickups to shine through and retaining a great dynamic feel throughout, bringing the best out of your playing. Extra small features such as a mute switch in place of a traditional standby will improve the life of your tubes and circuitry and a half power switch makes the amplifier even more versatile.

To risk stating the obvious, this is neither a cheap amp, nor is it designed for beginners. It's a handmade product for a guitarist who can tell the difference and is willing and able to pay for it. That doesn't mean it is exclusively for professional players, though. It may be built to survive successive world tours but it would be just as useful in the studio, playing pub and club gigs or, frankly, anywhere else you wanted to use it. All it demands is a guitarist discerning enough to understand why it is so much better than most of the alternatives. Is it worth the asking price? Like a pair of handmade shoes, or a handmade car, if you can afford it - undoubtedly.