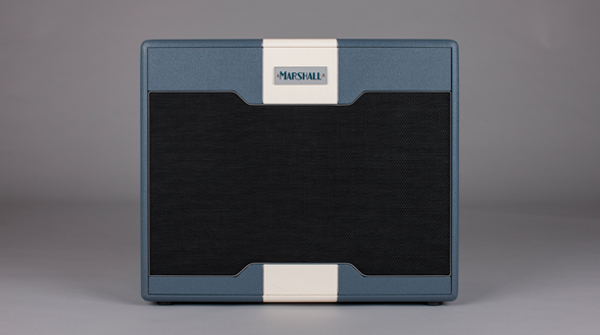 It's new - it's here - it's stunning! Michael Casswell was one of the first to try the brand new Marshall Astoria range - the latest offering from a company back on top form.

Marshall really is at the top of its game at the moment. In recent years the British amp maker seems to be producing amps that really can stand tall against some of best boutique rivals out there - and seems to be doing so at prices which must make some of the boutique guys wince. What's even better news is that it isn't cutting corners on the way. The new UK-built Marshalls we've been seeing at GI Towers during the past couple of years are as well made as any Marshalls - and that reputation for rock solid performance wasn't won easily!

So to the new Astoria range, which was announced in April this year and which we've been itching to get our hands on ever since. It was worth the wait! As we unboxed the new arrivals it soon became clear that these have to be some the best looking amps around, especially the blue and cream 'Dual' model, which comes in a particularly nice shade of blue which would look great on any muscle car, complemented by a cream 'go faster' stripe. The Dual is the one I would choose out of the three options in the range, in fact, because it's the best equipped and comes in the coolest colour, so it was good fortune that the Dual models where the ones Marshall chose to send us.

So, your choice of Marshall Astoria goes like this. There are head and cab versions of three basic models. There's the green and cream Classic, which is a no frills, single channel 30 Watt head or combo with a 12AX7 (ECC83) front end, GZ34 rectification and KT66 tubes on the output stage. I guess this would be for the purist who doesn't want any effects loops or channel switching, someone who is looking to do everything with just one or two pedals into the amp and his fingers, which is a cool approach, but does limit your options a tad.

Next up is the red and cream Custom. With this version you get a single channel amp with an effects loop, a tone shaping pull switch and a gain boost, all of which is foot switchable. If you set this amp right with the foot switchable gain boost function, it could virtually be a two channel amp, although officially it's not.

Finally, we have the blue and cream Dual, which gives you two channels, both with push pull pots to tone shape, a foot switchable series effects loop and gain boost. This is the most versatile of the three, and, as I say, is the one I would go for as I would prefer to have the choice of the extra features and know they are there if I need them...which, knowing me, I would!

All three Astorias amps have a combination of hand wiring and printed circuit boards, which is a sensible approach delivering the personal touch you want from a valve/tube amp but also the famous Marshall reliability. I can vouch for how well most Marshall amps are made and how they don't let you down. I even own a few that are older than me and are still in perfect health.

By the way, the 30 Watts this amp kicks out should cater for most situations, and if it's too loud, there is an onboard pot for stepping down the watts to more modest, but still fairly rude levels.

As I say, all the Astorias come in combo or head and speaker variants. The speaker being used is the trusty 75 Watt rated Celestion G12H 'Creamback'. Both the cab and combo versions feature just single speakers, but they are enhanced by the cab design and by the fact that both options are open back. One way to think about open back over closed back cabs would be the fact that an open back cab will fill the room or stage with a wash of sound, whereas closed back cabs will rapidly push the sound directionally forward taking out anyone in the way. I tend to prefer the open back style of cab, so this gets my vote on the Astoria.

Soundwise? Well let's leave the Astorias to speak for themselves via our video! Suffice it to say that they are everything you will have dreamed they would be. Vintage tone? All the way!

As for the price and our rating, these are high end products and are priced accordingly but that ignores the obvious comparison, which has to be not with mass-produced amps but against the best boutique products out there - and in that company the price looks as great as the Astoria sound. The Astoria Dual, in particular, will hold its own tone-wise against more or less anything, especially when augmented by some choice stomp boxes. All Marshalls love pedals, and no matter what amp you own, it's good to expand your sonic options with a few choice stomp boxes.

All in all, the new Astoria Duals are a triumph. Well done again Marshall.