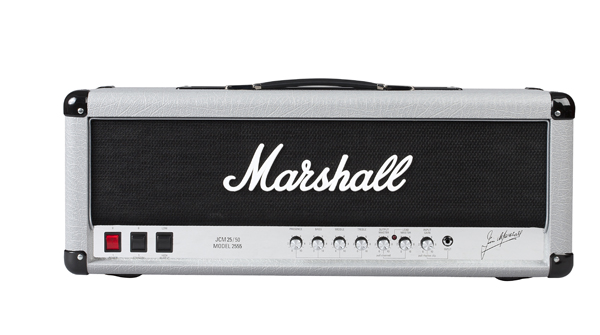 If there was one amp that Marshall needed to reissue it was the 100 Watt EL34 driven Silver Jubilee 2555 head from 1987. It was only made for just over a year making it now very collectable. The original was a great sounding, great looking amp that signified 25 years of amp production, and 50 years of the late Jim Marshall being involved in the music business. Hence the Silver Jubilee series of amps were given the designation 25/50.

The original was also one of the first amps to have pentode/triode switching, which meant you could half the power from 100 down to 50 Watts. It was also one of the first Marshall amps to have some kind of channel switching, although what this actually was in practice was a pre-amp circuit that had three gain modes, clean, rhythm clip and the Lead Channel, which worked its magic on what is a single channel amp, pretending to be a two channel wonder. The 2555 was essentially a hot rodded JCM800, which was the amp that got Marshall back to being the market leader in the late '70s. Any version of the JCM800 was and is a great amp to own, but the 2555 Silver Jubilee version was a cracker.

The re-issue 2555x largely stays faithful to the original, but there are some internal tweaks to make this version quieter and more reliable in operation. Also, the channel switching has been improved to make that side of things bomb proof. The original did develop a problem in that area from time to time and I bet the repair guys at the factory got bored repairing that particular foible as the original amps got some mileage behind them. There are now separate impedance outs for different speaker combinations rather than the slightly awkward selector found on the original. The input jack is now chromed and stronger and the handle is slightly different.

Any of these tweaks and deviations from what we got in 1987 seem to be there to improve things rather than cut costs and improve profit margins. Marshall has taken the original design and improved it. I would personally take this reissue over the original, simply because of the peace of mind that goes with it.

In terms of getting the best from the 2555x, the choice between the Clean or Rhythm Clip channels is made by engaging a push-pull pot, so you would choose between the two settings and use the footswitch to activate the Lead channel. It's all a bit of a balancing act to get the best settings for your style or tone, but where ever you set the gain stage, plenty of dynamics can be got from working your guitar volume pot or even by adding extra stomp boxes such as overdrives, compressors and boosters. All Marshalls respond well to pedals and this is no exception. There should be enough Marshall gain for most tastes but it is almost standard practice to push the front end with a drive pedal to take things over the top if needed. The 2555x also has a series effects loop for your modulation effects.

There is just a single global EQ section which works well enough, but again you may have to find the balance that gives you that perfect setting that will work for both the clean and dirty side of things and cater for the tones you will need to use live. Generally, I tend to crank the bass on most Marshalls and then set the treble and mids around 2-3 o'clock depending on cabs and speakers. The presence control is best adjusted to the room you are playing in. The gain sound you get from the 2555x is a great refined '80s-'90s era tone. It's from a time when there were solos in songs and the tone and execution of the guitar parts were crafted and really counted. Some would say it's one of the best solo sounds Marshall came up with. I would say it's up there as one of the iconic tones from any era Marshall. Check out the video and hear it for yourself. Note the equally fabulous 2551AV 4x12 that Marshall kindly loaned us to use with the head. Why would you choose anything else?

I like this amp very much and have been looking for an original for a long time now. It was a smart and wise move from the guys at Milton Keynes to reissue it. I may just have to come to an arrangement with the people in charge at Marshall to end up the owner of this actual one. Yes, it's that good!

As always with expensive gear, we agonised for a while about a rating but, really, how can you say a handmade British-built Marshall for this sort of money is anything less than excellent value? If you have any doubts, compare it with the prices being asked for some of the 'boutique' amps you see around these days.