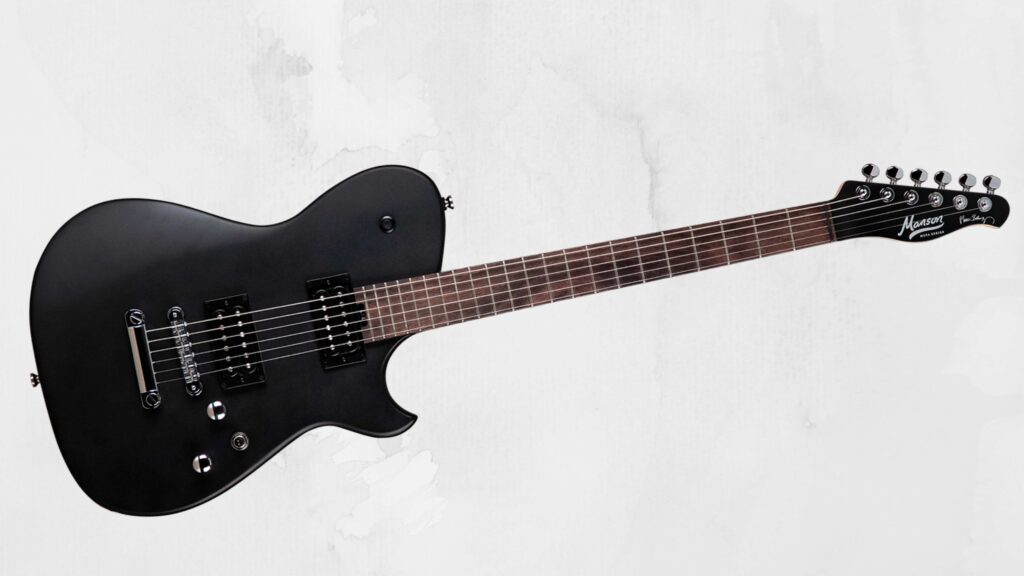 Nick Jennison reviews the 2020 META Series MBM-1 Signature Guitar, Manson Guitar Works' new and lower-priced model (produced under licence with Cort) that has been extensively modified and developed to reflect the guitars that Matthew Bellamy plays on stage with rock giants Muse without breaking the bank. Let's find out more.

When you hear the name Manson, it's very likely you immediately think of Matt Bellamy. The association between the Exeter guitar brand and the Muse luminary had produced some truly unique instruments, with features like built-in Fuzz Factories and Kaoss Pads, sustainer pickups and MIDI functionality. These instruments are very desirable, rare and pretty pricey too.

Enter the Cort/Manson META Series MBM-1. Built by east-Asian guitar manufacturing giants Cort under license from Manson, it's the most affordable Matt Bellamy guitar ever made. While it lacks some of the more outlandish features of its UK-made counterpart, it shares the same offset T-type silhouette, neck profile and matte black finish (also available in "Starlight Silver").

Straight out of the box, the MBM-1 exhibits the build quality I've come to expect from Cort. If you've ever laid hands on an Indonesian or Chinese-made Ibanez or PRS SE you'll know what I'm talking about - flawless finish, tidy fretwork, tight neck join, sturdy hardware and electronics. There are so many excellent yet affordable Cort-made guitars out there that it's easy to forget how impressive it is for a guitar at this price point to be built so well.

Despite the factory action being a little high, it only took a quick adjustment to have the MBM-1 playing beautifully. The 10-14" compound radius fretboard means the action can be set very low without fear of high bends choking out, while chord playing at the lower end of the neck is still very comfortable thanks to the tighter curve. It's more labour intensive to carve and fit frets to a compound radius board than one with a single radius across the entire neck, so it's inclusion on a guitar at this price is laudable.

The electronics are relatively straightforward compared to the custom-shop instruments Bellamy uses on stage and in the studio, with a pair of humbuckers and a simple volume, tone and three-way toggle control layout. I'm surprised that there isn't an option to split the humbuckers for a single-coil voice, but that's not something you'll find on the high-end versions of this guitar either. Another feature the MBM-1 shares with it's bigger brothers is the kill button mounted on the upper shoulder. This highly entertaining feature greatly expands the sonic possibilities of the instrument, giving access to stuttering textures that are distinctly un-guitar-like, and the use of a button instead of a toggle switch makes using this feature more tactile and immediate.

Sonically, the MBM-1 is super-massively (see what I did there?) fat and chewy, and is clearly designed to punch through walls of fuzz and distortion. The bridge humbucker has a throaty midrange honk that's reminiscent of a JB, and is perfectly voiced for gained-out sounds. Using just your pick attack, angle and the amount of fingernail/skin you strike the string with, it's easy to control the harmonic content of a screaming high gain amp or raging fuzz pedal. By contrast, the neck pickup is thick and plummy, sounding almost synth-like under heavy saturation. It's also a pretty satisfying clean voice, with a jazzy warmth and smoothness and just a hint of sparkle. Played clean, the bridge pickup alone is a little too nasal for my liking - not that I'd change it, since this is the very quality that makes it so good when played distorted - but the middle position blend is very pleasant, with plenty of clarity and snap.

The Cort/Manson META Series MBM-1 is a lot of guitar for the money, and while it lacks some of the crazier features of its big brothers, it still retains the essence of what makes those guitars so great. If you're a Muse fan or even just a fan of thick fuzzy walls of sound, you need to check one of these out.