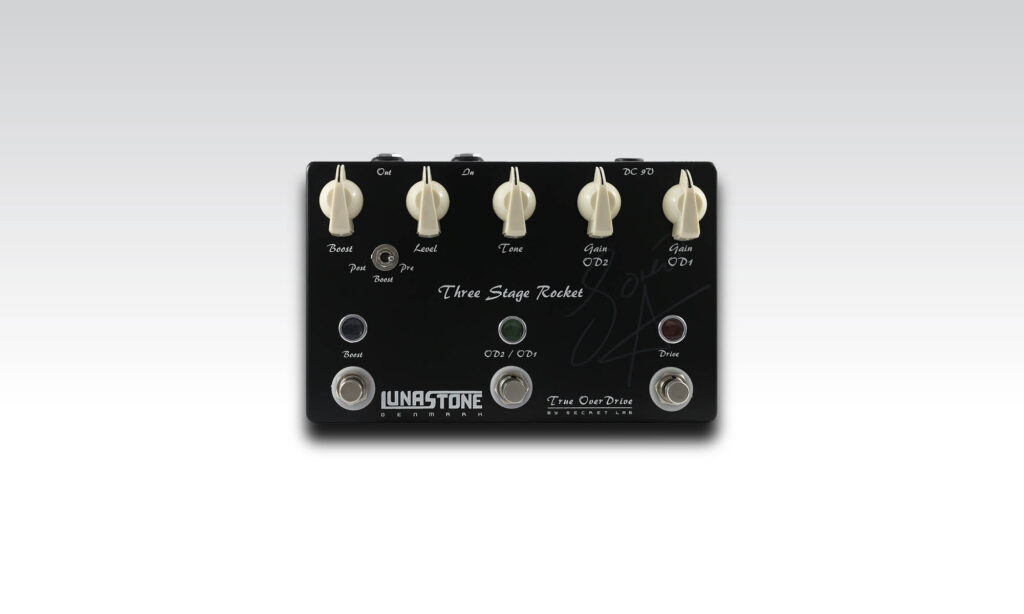 The boost is independently footswitchable in either OD mode, or even when the OD is bypassed, and offers a brutal amount of clean volume boost. It can be set either as a pre-gain boost for more distor-tion/saturation or post-gain (for an uncoloured volume lift.

Warm, fat tones across a broad range of gain

The Lunastone Three Stage Rocket is exactly what it says: Three stages of gain with a massive range of tweak-ability, without sacrificing that classic, punchy sound at any setting.  Designed in collaboration with the Danish guitarist and producer, Soren Andersen, this pedal could be the perfect tool for performing guitarist who just needs a variety of tonal options from a small footprint. Nick Jennison puts it to the test.

Danish pedal company Lunastone make some absolutely superb overdrive pedals. Their True Overdrive 1 & 2 are some of the warmest, most organic drives that we’ve laid hands on, thanks in no small part to their rather unique architecture. Instead of the conventional method of using clipping diodes, designer Steen Grøntved builds his pedals with cascading gain stages (a combination of JEFT, MOSFET and op-amp stages). This is the way the vast majority of high gain valve amps generate their gain, and the result is a very dynamic, organic feeling drive that responds beautifully to subtle changes in your pick attack and guitar’s volume and tone controls.

Based on the same platform (specifically, the Big Fella) the Three Stage Rocket is a collaboration with Danish guitarist and producer Søren Andersen. It’s essentially two True Overdrive circuits in a single box, with an independent clean boost thrown in for good measure. What this means is that you can footswitch your way from a clean amp to mild, classic overdrive, up to something more full-bodied and then finally all the way up to screaming lead sustain.

The two overdrive stages are voiced very similarly, with a hair more gain and thickness available in OD2, but there’s not a whole lot to separate them. The drive is very warm and lush, with a subtle throaty growl that would make Billy Gibbons grin from ear to ear (not that you’d be able to tell behind that beard), but it’s exceptionally snappy and responsive. Chords are urgent and open, while faster lead lines are communicated without any “fight”. It’s a very rewarding playing experience!

The gain range in OD1 goes from a very gentle Americana-approved purr all the way up to Angus Young levels of grind, while OD2’s thicker voice will take you into early 80s saturation - although it still maintains a very “classic” accent with no hard edges or excessively biting treble.

The boost is independently footswitchable in either OD mode, or even when the OD is bypassed, and offers a brutal amount of clean volume boost. It can be set either as a pre-gain boost for more distortion/saturation or post-gain (for an uncoloured volume lift. For my tastes, the pre-gain boost is a little flabby at times, as there’s no low-end roll-off or mid hump to tighten things up as you pile on all that extra gain, and neck pickup lines on the low strings can almost sound like a fuzz. It’s certainly a useful option to have in a pinch though. Set to post, however, the boost performs beautifully, lifting the volume of your overdriven signal to help solos and hooks stand out in a live mix. This is how Søren uses the boost in his own rig, which tells you everything you need to know.

Sonically, the Three Stage Rocket is very clearly optimised to work with British style amps with prominent mids and rolled off lows. There’s a monstrous amount of bass in this pedal’s tone, and there’s really no way to take it out. This produces some serious cabinet grunt through an AC30 and is equally impressive into a clean Marshall, but it can be a little overpowering through black-face style clean channels.

All in all, the Three Stage Rocket is a very well thought out pedal that offers a range of classic voiced gain at the tap of a footswitch, and the boost is a very useful addition for the gigging guitarist. As if that wasn’t cool enough, Lunastone has also just announced that they’re now offering a version with MIDI, making an already incredibly versatile pedal even more flexible. 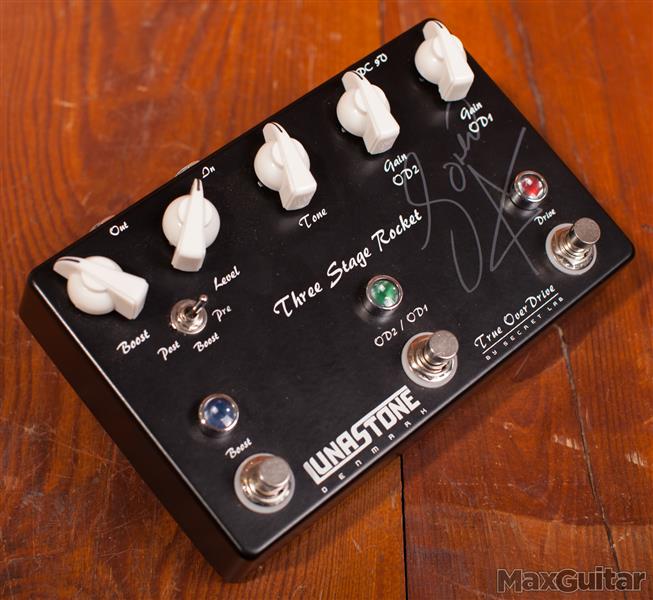 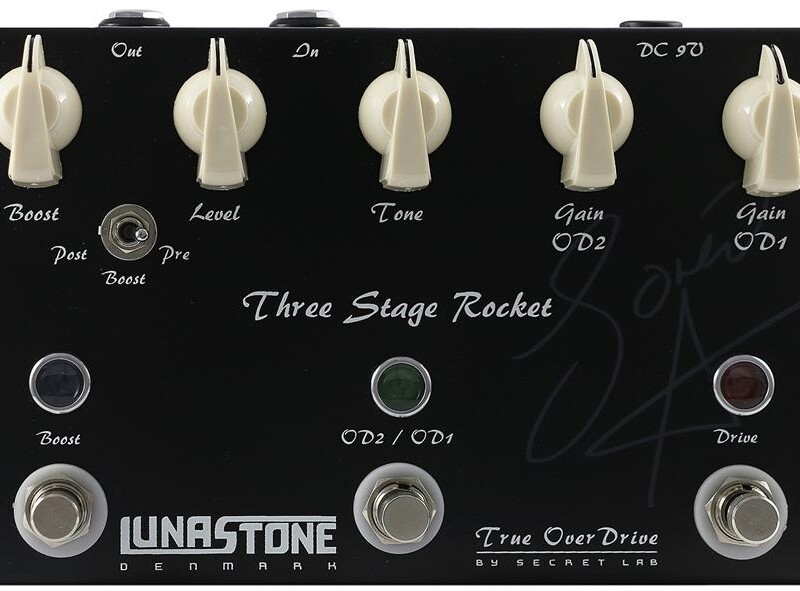 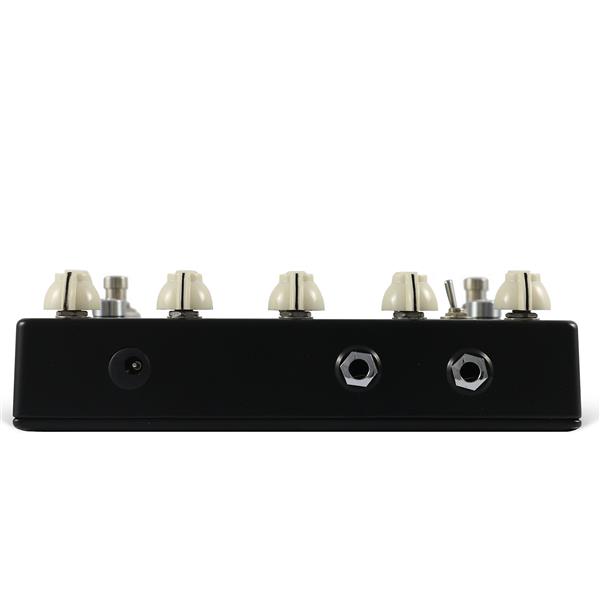