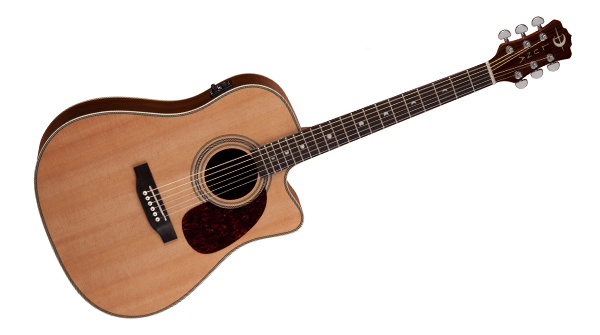 The AMD 100 belongs to Luna’s Americana Classic series that combines solid and laminated construction with traditional gloss finishes and boasts a good choice between nine traditional style Dreadnought, Folk, Jumbo, Grand Concert and Concert models - all but one of which are equipped with B-Band active pre-amps.

It has to be said that the world and his wife is aiming inexpensive acoustics at this market but Luna stands out in several ways, not least with some spectacular cosmetics on some models, for example on the AME 100 Dreadnought, the soundhole of which features a very impressive laser-etched American eagle. In comparison, the AMD 100 is a fairly conservative looking cutaway electro-acoustic Dreadnought. All the same, as an everyman’s guitar the AMD 100 still manages to impress, courtesy of a virtually flawless standard of fit and finish throughout.

The slightly bulgy headstock profile is probably something of an acquired taste but the decent ancillary hardware includes chrome plated sealed tuners topped with Grover style kidney button tuning keys; an arrangement that appears to work very well. Our review guitar displayed extremely stable tuning throughout our time in its company, despite being virtually straight from the box when we first got to grips with it. The mahogany neck features a very slender C profile that is surely designed to appeal equally to ‘crossover’ guitarists who flit between electric and acoustic, as much as the dedicated acoustic specialist. This is certainly worth noting if you are primarily an electric player looking for a manageable acoustic.

The 14th fret neck join offers plenty of range for flat pickers who routinely enjoy exploring the upper reaches of the fingerboard, whilst those who prefer to grab a big old open G Major chord and strum away will doubtless find that ever-reliable Dreadnought body style delivers the necessary power and consistency that is the hallmark of this seemingly immortal benchmark of the acoustic world.

Nicely finished frets with smooth fret-ends also present a strong argument in favour of the AMD 100’s worthiness as a comfortable and accommodating guitar that shouldn’t present any challenges to either the novice or more experienced player.

The overall good standard of finish is also highlighted by the neat herringbone/faux aged cream edge binding that helps to contrast the join between the sold spruce top and laminated rosewood back & sides. The AMD 100’s hard wearing gloss finish should prove to be more resistant to the slings and arrows of gigging life compared to its satin counterpart, plus the faux- tortoiseshell pickguard virtually guarantees that the top should remain blemish free.

An ebony bridge conceals the B-Band transducer pickup, which is connected to a control panel on the upper bout. The controls comprise a three-band rotary EQ, plus a handy push button anti-feedback phase inverter and a digital tuner that mutes the output when active, while a backlit digital display indicates when the guitar is tuned to the desired pitch. Incidentally, the guitar’s XLR output jack is mounted slightly lower than the bottom strap securing endpin. This arrangement seems to work slightly better than the combined endpin/jack setup featured on many electro-acoustic guitars, because it provides a much tidier method of tucking the cable out of harm’s way.

Acoustically, the AMD 100 sounds every bit as well rounded and versatile as a typical Dreadnought; the bass is tight and not too boomy whilst the treble, whilst perhaps not quite as strident as a typical Folk model, still has enough presence to lend the upper register a pleasingly articulate chirp.

By contrast, the amplified tone isn’t the most refined that we’ve ever heard from an electro-acoustic, this competitive price range notwithstanding. The B-Band system doesn’t translate the AMD 100’s guitar’s abundant natural warmth quite as transparently as it might and consequently there is a brittle synthetic quality to the amplified sound. Of course, a quick adjustment to the onboard EQ should help to improve things, encouraging a warmer, more natural quality, which is entirely possible to achieve given the range of the B-Band’s EQ system. All the same, if this guitar has an Achilles heel, we feel this was it. In fact when we came to rate it, we nearly nudged it down half a star but against that, it was just so playable that we notched it back up again!