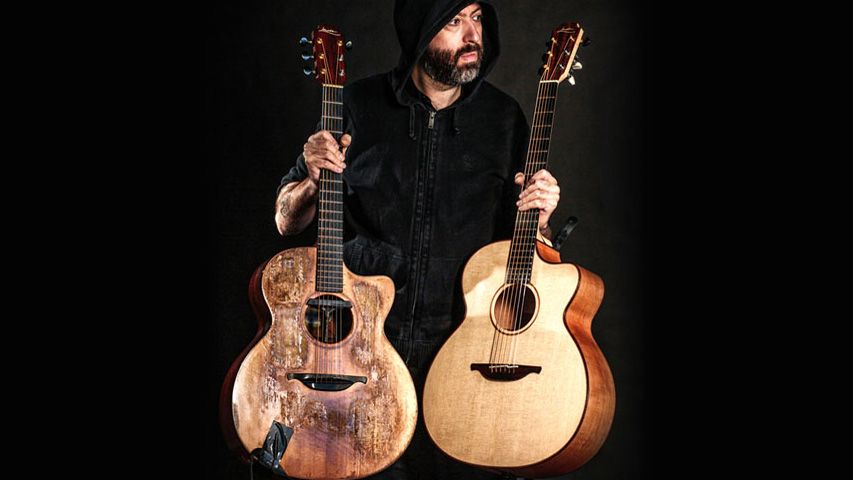 George Lowden approached Jon about building him a signature acoustic, something that Jon describes as ‘the greatest honour I have received in my career’ and the partnership was formed.

Wishing you could afford one

Sooner or later 'Wilma' Jon Gomm's phenomenally overworked Lowden acoustic was going to wear out. As he tells us in this issue's interview, choosing a replacement wasn't going to be easy. So he got together with George Lowden and the result is... we'll let Tom Quayle explain.

Jon Gomm is a pretty unique guitarist with an influence that has spread far beyond either the specialist acoustic guitarist market, or the singer songwriter genre. He is definitely in the percussive mould, which is very popular, but Jon sits in a unique niche since he does all his incredible technical magic whilst singing at the same time and writing songs that have connected with many people from all over the world. Jon’s main guitar, a Lowden 032C affectionately named ‘Wilma’, has been battered and bruised over the years by Jon’s playing style and touring regime so, when the inevitable repairs were needed Jon met up with the Lowden team and, as the team say themselves, ‘a mutual respect between master luthier and master musician was formed'. Consequently, George Lowden approached Jon about building him a signature acoustic, something that Jon describes as ‘the greatest honour I have received in my career’ and the partnership was formed.

The Jon Gomm signature is a Jumbo ‘O’ cutaway design that is almost as unique as his incredible playing, very much designed to live up to the rigours of the state of the art, percussive approach that takes such a toll on the top (one look at Wilma will give you an idea of just how much of a battering Jon’s guitars take!). The guitar is constructed from American black cherry for the back and sides, an unusual choice but one that was very important from a sustainability perspective. Jon is all too aware of the environmental impacts of logging mahogany and rosewood and asked George Lowden to look for a good alternative, finally settling on American black cherry for its tonal and visual properties. Jon even took the time to contact the logging company, in order to ascertain the sustainability of the forest from which the wood is taken - a true testament to his independent and forward thinking approach to both music and his instruments.

The neck is a beautiful five-piece maple and rosewood affair rather than the standard mahogany and is finished in a lovely satin for a smooth feel. Jon prefers maple since it is inherently more stable than other wood choices, especially in this five-piece design and offers him more consistency while travelling and utilising altered tunings. This is matched with an ebony fretboard featuring no inlays of any kind and ebony binding leading up to the classic Lowden headstock shape, where high quality Gotoh tuners are used, topped with ebony buttons for a clean look. The guitar doesn’t ship with Jon’s ‘Scruggs’ style Bill Keith banjo tuners on the high B and E strings as standard, but these can be added as an option if required since they form such an integral part of his style.

Where things get really interesting is in the top design. The challenge was to find a way of developing a top that could withstand the highly percussive approach employed in Jon’s playing without sacrificing the tone. The solution was to produce a hybrid top made from a lamination of a spruce top layer and a cedar bottom layer with the grain offset from one another so that the maximum strength could be achieved without preventing the wood from vibrating freely and dulling the tone. The grain offset of these two layers can be seen in the soundhole and the idea works superbly to achieve the required strength and tonal punch whilst retaining the classic look of a Spruce top. Those wary of the term ‘laminate’ in the acoustic world need not worry – the solution employed here is a stroke of genius and produces an incredible tone that is every bit deserving of both Jon’s playing and the Lowden name!

The guitar is constructed and finished to perfection as per the usual Lowden standards, with subtle details rather than over the top accoutrements. Jon was very specific in not wanting elaborate abalone or mother-of-pearl splashings on his guitar, so instead you get walnut binding, rosewood, mahogany and maple purfling and an understated rosette. The guitar has Jon’s signature on an internal label but doesn’t scream signature model in any other way – a refreshing change from some of the other signature guitars on the market that are steeped in logos and extravagant inlays. Despite the subtle design this is a gorgeous looking guitar – the black cherry in particular adding a unique look thanks to its lighter shade and dark grain pattern. The gold coloured tuners and figured walnut overlay on the headstock add an element of understated class to an already very pretty instrument.

Playability is just as exceptional as the build quality thanks to a very friendly neck profile that will really appeal to the electric players out there who are looking for a high-end acoustic. The fretwork is exceptional, offering a low and even action with a factory set-up that is among the best out there. Chordal work and lead playing are both extremely comfortable without the usual acoustic finger fatigue setting in over long playing sessions, ideal for Jon’s pyrotechnic shows or for more reserved players who just want an acoustic guitar that doesn’t require biceps in the fingers.

Tonally the Jon Gomm model is a true delight, with a crisp and unbelievably warm bottom end, a detailed mid-range and smooth high end that makes the guitar very hard to put down. There’s just something so satisfying when all of the frequency range is so well represented like this and everything you play seems to sing and sustain in such a natural manner. Again, anyone worried about that hybrid top approach needs to put their scepticism to one side and try this guitar. Percussive hits have a huge bass thump and the dynamic range and projection from both finger picking and plectrum work are nothing short of astounding, giving you an instrument that brings out the most musical elements of your playing and offers a much more expressive palette than your average acoustic.

The guitar can be specced out with a Fishman Rare Earth pickup if required, out review model didn’t have this installed, but miked up with a Royer R121 Ribbon mic the tone is wonderful in every respect.

It might be expensive but, getting this level of playability from a guitar that sounds this good just seems almost like cheating. It simply shouldn’t be possible, but it is - if you can afford it of course. A deluxe hard case is included in that price but there’s no getting away from the fact that you will need to make a serious investment to get this level of quality from an acoustic guitar. For well-off Jon Gomm fans and modern, percussive acoustic players looking for the best guitar for their style this is a total no brainer, for everyone else this is something to aspire to – an incredible instrument for an equally incredible player. As for a rating? We couldn't do it. This is one of the only two or three guitars we have reviewed that defies that sort of categorisation.