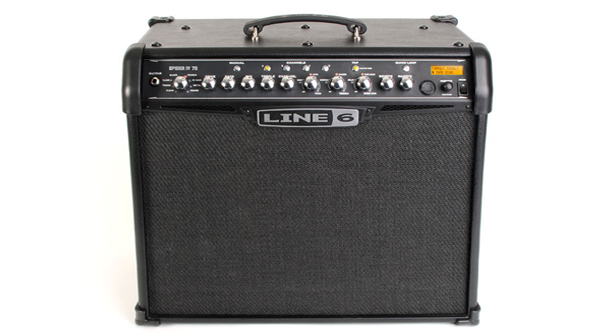 Line 6 launched the original Spider amp back in 2007 as a budget modelling amp for practicing, rehearsing and light gigging. Since then, the Californian company has released three further updates, resulting in the latest version, the Spider IV. In that short time Line 6 has sold over one million Spider amps to guitarists around the world, so, as Line 6 has recently been celebrating this hugely impressive achievement we thought we should find out why so many people have made this their amp of choice - and why so many still do, despite the growing competition.

The amp Line 6 loaned us for review was the 75 Watt combo version featuring a 1x12 design but the range comes in many flavours, from a 15 Watt mini combo all the way up to a 150 Watt head. The two lower powered 15W and 30W combos have a smaller complement of amp and FX models and can store four channel presets. The higher end models feature an LCD display with more amp and FX models and over 250 presets, switchable either on the amp itself or from a foot switch. As with many amps in this price range the footswitch must be purchased separately.

Our 75 Watt Spider boasted a 12" Custom Celestion Speaker, 16 amp models, 20 adjustable 'smart' FX with up to four in use at once, over 250 artist created presets, 64 user presets, four switchable channels and even a looping mode. The front panel features full EQ controls, a small LCD display for editing effects and presets, a chromatic tuner and a very intuitive layout with sensible controls that you don't need a Ph.D. to use. On the back panel we have a Headphone/Direct out (effectively turning the amp into a POD for recording) and an mp3/CD player input for jamming. This amp is feature rich and feels like exceptional value given its budget price point.

Tonally, the Spider IV was a great deal of fun to play with. I think one of the elements an amp like this has to excel at is producing realistic and inspirational sounds that are attractive to beginner and intermediate guitarists. The Spider certainly doesn't disappoint in this area, with a huge number of great sounding presets from many famous artists and even a selection designed for specific famous songs. Dial in the sound for the song you want to learn and you're all set to go. I wish it had been this simple to get great tone when I was learning! Once you've dialled in your chosen preset it's supremely easy to edit and tweak any aspect you desire. The LCD display gives you an accurate read-out of each parameter as you edit using the dials on the front panel. Each sound can be stored as a user preset and assigned to one of four channels making it easy to match four sounds for a set list and switch between them quickly. This is a great feature making preset switching fast and pain free. All tones can be edited via computer and saved back to the amp using Line 6's foot pedal.

The built in FX are good quality and live up to their Line 6 pedigree. They'll never match boutique pedals but here you have everything contained within one compact, portable and high quality package. FX include the usual suspects such as Delays, Flangers, Chorus and Reverbs but you also get Smart Harmony, Tremolos, Auto Wah and Auto Swell effects. It's amazing how much content Line 6 have squeezed into the Spider package. An on-board looper allows for 14 seconds of loop time with a sound on sound feature for creating soundscapes. The looper function allows you to change presets whilst looping so you can record a clean chord sequence and switch to a lead tone for soloing. Unfortunately, while the looper can be triggered from the front panel of the amp, you'll need either a willing volunteer or a foot pedal to make use of the feature properly.

All of the amp models were very musical and almost any tone you can think of can be approximated with this many options on board. Two versions of each model are on offer with all levels of drive from a soft bluesy break-up to a monster distortion for detuned madness. The models respond well to your playing and attack, cleaning up well with volume changes. Channel and amp model changes can result in large volume changes so be careful with your ears whilst editing. Build quality is generally great, my only niggle being that the control knobs feel a little cheap but construction was impressive and solid for this price. A huge bonus is that as Line 6 develop its models and effects the Spider can be updated with new firmware as it's released. New features make the amp even better value for money and a more attractive prospect for the consumer.

So why have so many people bought a Spider? I think its feature to price ratio and its simplicity combined with quality is the answer. As a consumer I want to feel like I've got more than I paid for and my purchase will keep going as long as I do. I want it to be easy to use and inspiring to play. The Spider IV fulfils these criteria with room to spare and is well within most budgets. Line 6 has also catered for all corners of the market from the beginner guitarist looking for a starter but quality amp, to a pro looking for a serious practice and rehearsal amp. If you're in the market for a budget amp that does pretty much everything, it can be a crowded, confusing place, but you can be sure the Spider IV should be at the top of your list. Can 1 million people be wrong? Judging from this sample, I'd have to say a resounding no!

Gi Stop Press- Just as we were going to press, Line 6 announced the launch of a new facility for registered Spider owners - Spider Online, a new free online resource offering over 500 lessons, jam tracks and tones created by Line 6, artists and fellow Spider owners. In addition to the lessons, users can play along to over100 jam tracks, bass and drum grooves and drum loops. Spider owners can also access hundreds of new tones that can be downloaded directly to Spider amplifiers or displayed on screen. That just adds to the outstanding value for money, we'd say.