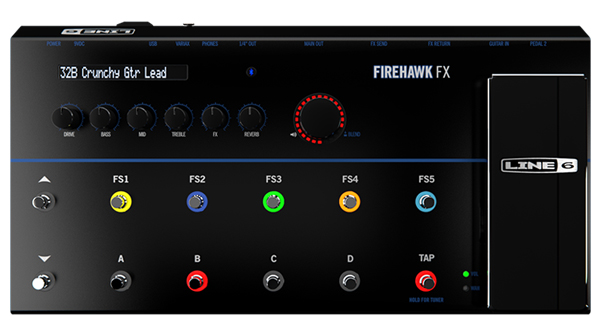 Line 6's Firehawk has been around for a while now but seems to have established itself as a very popular choice as an affordable floor based multi FX box. One of its key features is that can be controlled by your phone or computer via Bluetooth connection and another is that Line 6 has made this very easy to use - probably one of their easiest to use pedals, in fact. Line 6 fanatics will find this a familiar journey, but there are a few extras that I feel should be mentioned. Let’s take a look at some of the key features of this awesome unit.

Those familiar with Line 6 products or floor board based multi FX units in general will feel right at home with this board. A nice clear screen displays your patch number and preset name. Each bank features four channels which are all nicely lit up on the bottom row of the board. When a channel is selected, the upper row of switches can be used to turn on and off whichever effects in a preset you desire. Below the mini screen there is a very familiar amp style row of controls that can be used for quick tone adjustment on the go for things such as drive, eq, reverb, fx level and of course master volume. The master volume control is large and highlighted by a LED ring that lights up to show you where you are from 1-11! Of course also have an expression pedal which doubles as a wah pedal when enabled in the preset you have selected.

The layout is simple and easy to get used to. Line 6 has made this a plug in and play style unit from the get go. In principle, it's very similar to its siblings such as the POD HD floor units, however the editing can be done via Bluetooth connection by downloading a free app from Line 6. The app allows you to create your own presets, edit presets, download other people’s presets, you can use your device to play backing tracks through the pedal and out the amp/speaker and it also has a built-in tuner which is nice and clear. Those familiar with POD Farm will be familiar with how the app is laid out in terms of building a rig. You can simply drag and drop effects before and after your amp. You can change which footswitch each effect in the rig is assigned to. Changing the settings of each effect or amp is laid out very simply and changes made in the amp get beamed straight to the pedal and vice versa. It’s also very easy to sort out things like bank order and patch names. I did have a bit of a problem connecting the pedal via Bluetooth to my phone initially, however I shall take that as my own incompetence with my phone! Once connected everything was fine. But it did make me worry about the hypothetical situation of using this unit in a serious gigging situation where a patch may need to be edited on the fly…what if my phone or tablet froze or ran out of battery? This is only a small con in the grand scheme of things and I am sure anyone who plans to use this unit in that setting would be well prepared with this sturdy unit.

This unit comes with a whopping 29 HD amp models, 25 HD FX models, 78 POD Farm amps and 95 POD farm effects. The Firehawk comes into its own with the HD model amps which are taken from the POD HD. These amps have a lot more dynamic response to them, they sound a lot like the real thing - no surprise as they are based on the real thing! You can select your amps from a list of British and American amplifiers and I found it very easy to dial in a realistic sounding preset with this pedal going through the return FX loop of an amp head. Of course you can model your patches to your heart's content with a whole range of modulation, distortion, delay, reverb, loop, wah, EQ, compressor effects.

The Firehawk features a whole host of outputs and inputs. You can simply connect it to an amp via the ¼ inch jack outs in mono or stereo. There is an FX loop out of the pedal so you could use the pedals effects through your real amp's FX loop and still use your amp tone. There is a handy XLR socket for going direct into a PA system, which would be very handy if you are doing function band based work or need very quick turn arounds. Of course there is a headphone input and also a USB input so you can connect directly to a PC and use the pedal as an interface for recording.

If I have any reservations about the Firehawk it is that if you had set up on stage and only had time for a very quick line check, during which you found something was really wrong with a preset for that gig, you would have to have your phone or tablet at hand, fully charged and ready to connect. For that reason, if you were taking it on the road for serious gigging I would highly suggest having a tablet dedicated to running the amp that is ready to go at all times. That would also overcome any of the linking problems that can sometimes occur with Bluetooth - whatever the system's designers say about it!

Overall, this is a fantastically powerful pedal with a huge range of facilities. It's well made, easy to use and sounds fabulous. It's not hard to see why it is proving so popular, is it?