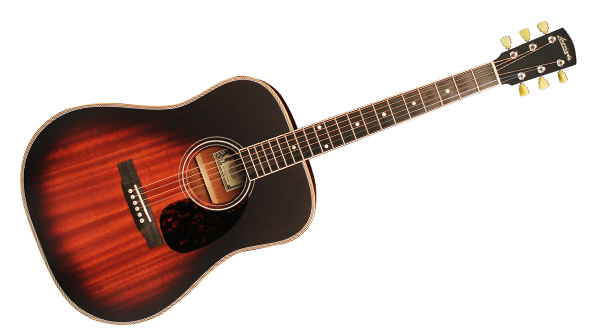 Jean Larrivee, the founder of Larrivee guitars, began a guitar building apprenticeship with Edgar Monch Sr. in Toronto Canada and has gone on to become something of a legend in the acoustic guitar world. Unlike some of his contemporaries, who have specialised in highly expensive exotica, Larrivee has used his renowned knowledge of tonewood and manufacturing skills to enable him to build top class guitars at, well, less than the sort of money you would expect to have to pay for them. What's more, he has done it with factories in the USA and Canada, not China or Indonesia.

In this review I'm looking at the Larrivee D-03E Vintage electro acoustic guitar. It's a dreadnought sized acoustic, finished in sunburst, a traditional yet fine looking instrument and that finish was exceptional throughout, with the ebony bridge and synthetic tortoiseshell pickguard keeping the instrument looking elegant. The guitar is built from all solid mahogany (currently a very fashionable choice), with all solid mahogany top, back and sides and a single piece mahogany neck, adorned with an African ebony fingerboard.

Having matched wood throughout gives good tonal consistency. Mahogany's weight and density are similar to maple's, however mahogany tends to have a more mellow, soft and warm tone to it. This certainly rings true on this guitar, which delivers plenty of body and volume, yet also has lots of scope for vast dynamics. Picked or strummed, this guitar responds well with a balanced tone throughout. The Ebony fretboard offered a bright attack with good sustain and will boast excellent durability. Tuning stability came courtesy of the retro looking Ping tuners.

A 22.5” scale length, offering 20 frets with microdot inlays and a thin neck make for an easy playing experience. The action was a little on the high side for my tastes, but it was nothing that you couldn’t get used to, plus a slightly higher than norm action tends to give better tone and intonation overall, so it’s a bit of a toss up between ease of play and sound. Of course, you could easily have this adjusted to taste when you buy one. The neck of the D-03 is hand-fitted using a traditional dovetail joint for maximum strength and excellent tone and further tonal improvement is supplied by the Graphtec TUSQ nut, saddle and bridge pins. As you can see, this guitar is made from top quality materials and there really was no sense of corners having been cut.

Onto the all important electronics. Many fine acoustics have their acoustic tone ruined once they get plugged in and it's sad but true that you can't always rely on guitar makers not to nickel and dime the price down, fitting a cheap pickup that doesn't do an otherwise decent guitar justice. In this case, however, Larrivee has opted for a Shadow Nanoflex pickup, which is unusual in several respects, not least because you would normally expect to find the controls on an acoustic fitted to the top of the body. However, Larrivee has gone for having the controls tucked away inside the soundhole, which is why, on first glance, you would be forgiven for not realising that this guitar is an electro-acoustic. Undoubtedly, with such a vintage styled guitar, that was the company's intention and it definitely helps it keep that 1940s/50s look.

The volume and tone controls are operated with two small knobs inside the soundhole that are reasonably easy to get to once you get used to it. We plugged straight into the studio PA with monitor speakers quite close and I had no problems with feedback, even when backing the tone control right off. The great tonal nuances that were evident from the Larrivee unplugged were, I'm happy to say, carried over once plugged in, so this Shadow pickup gets the thumbs up from me!

The Larrivee D-03E Vintage is quite an understated guitar. It's not going to turn heads when you get it out the case, not that it looks bad in any way, it's just very modest with no frills - very vintage, in fact. What it maybe lacks on bling, though, it makes up for in spades with its tone and playability. It is a high-end acoustic, but what I love is it lets its sound do all the talking, and once it’s plugged in that will certainly get the heads turning. Of course, being an all solid wood guitar, it will also improve over the years as the woods mature.

Pricewise, this isn't one of Larrivee's cheaper models but you have to judge it, not against Far Eastern factory made guitars, but against products of the 'big name' US builders and judged in that class, it is actually good value - and it even comes with a hard case, which is always good. This is a fantastic acoustic that suits a variety of styles and sounds and should help even further cement Larrivee as one of the top acoustic brands.