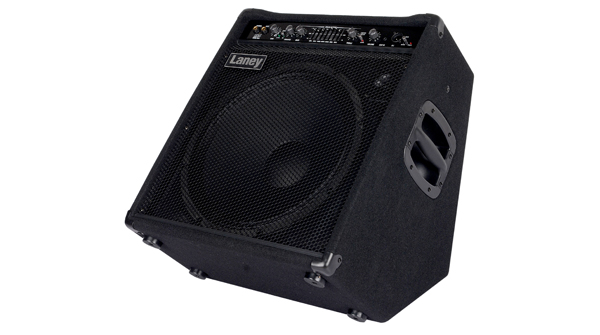 Here's UK veteran amp maker Laney in for more 'Bassment treatment' of one of their well established series of bass amplification. The RB6 is just part of a wider range of backline from Laney known as the 'Richter' series. Within the range are the RB1 practice amp with an 8” speaker, the RB3 that has a 12” speaker and 65 Watts output. The RB7 and RB8 are 300 Watt amplifiers that feature a 2x10 configuration and single 15” speaker arrangement, respectively. The 165 Watt RB6 sits sort of in the middle of the range of combos - and if you need something a little more from the Richter range, there is also a separate head and cabinets available too.

Over to the front panel, as we look into what the RB6 has on offer. For the tweakers amongst us the RB6 has a whole host of features. Left to right we have: Normal and High level inputs to suit a range of instruments with differing output levels. Both are serviced by a single gain control further optimising your bass level going in to the RB's signal path. Laney knows that us bass players like to keep our playing in check at times and to that end they have included a compressor on board. The compressor, although very simple and not including some of the extra controls of a studio or pedal compressor, does an ample job of managing your louder notes thus giving you a smoother bass output level when playing passages. Two LEDs are there to show that the compressor has been enabled and to let you know that the compressor's threshold has been passed and that it is actively doing its job.

Next up, in addition to shelving bass and treble EQ controls, Laney has provided a full graphic equaliser and further tonal tweaking in the form of an enhancer circuit. With such options it's easy to get overwhelmed with fiddling, but Laney's tidy layout keeps things easy to understand. The controls are wide ranging and I'd suggest if you are unsure, start by making small adjustments to each. A little goes a long way here. Moving on then to what is essentially the output side, Laney knows that we delicate, shy, retiring individuals (ha ha!) love to rock out and be heard! So, to protect our gear the RB6 has a limiter circuit to keep things from going in to meltdown mid-performance should we be edging toward earthquake bass velocities. You do have the option via a switch to bypass the limiter. Frankly, you're best leaving it engaged on this combo, it's there for a reason.

Other than the volume control there is an 'aux in' for connecting an external device such as a drum machine to play along with and there is a front mounted DI output in the form of an XLR socket. There is a switch to turn off the tweeter too that is a great idea if you are using distortion pedals.

Around the back of the ported cabinet - which as you can see is a superb kick-back 'monitor style' shape - you'll find a power socket, power selector for use in other countries and mains switch at one end, while a tuner output and effects loop for external professional processors finish up the features and connections. Let's look at the combo in its monitor position. It's a very useful way of making sure you can hear your performance, especially on crowded stages. Often the low end flaps passed our kneecaps and we don't get to hear the full quality of our bass sound that this combo produces well. Having the speaker directed at your ears instead means you will hear your performance more clearly and you probably won't have to turn up as loud either. If you are playing stages with PA support, the engineer will probably love you even more because your on stage sound won't interfere with his 'front of house' mix. Happy engineer? Great sounding gig!

The only downside I can see with having the connections mentioned round the back is if the combo is in its monitor position. No harm will come to the cables, but it's going to be more difficult to get round to see what has fallen out on a dark and crowded gig stage. I know those occasions well!

The 165 Watt combo deals up a tight and rounded tone that I feel would be good for smaller gigs, teaching and practice routines but also fine for monitoring performances owing to its kickback design. The single 15” speaker and defeatable tweeter do a good job of delivering a tight tone with top end that has bite but a smoother tone when pushing with drive pedals when needed.

Weighing in at 18.5Kg it's not a hefty beast either, which will please the upwardly mobile, especially when it comes to the 2am load out, post-gig!

Overall, the Laney RB6 is a versatile amp with a more controllable and shapeable tone than some of its obvious rivals. This is a good as it makes it a more versatile performer. It also has a great feature set, making it a very sensible choice for the gigging player.