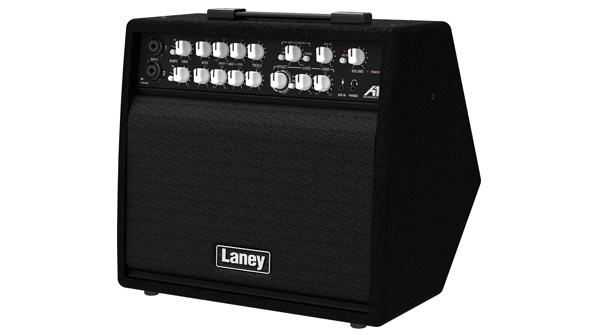 The original A1 acoustic/vocal combo was one of Laney’s most steadily successful amplifiers but for 2014 the West Midlands based company took the decision to re-design the A1 and take it to another level. Has the company succeeded? Well, new A1, cleverly rebranded the A1+, certainly comes absolutely crammed with a plethora of new features - impressively so for such a modest asking price. Let's take a look.

The A1+ features two completely identical, but also completely independent, instrument/mic channels and a separate auxiliary input. This allows for a great deal of versatility when it comes to connectivity options. For instance, players who use instruments which are equipped with both piezo and internal mic systems (our recommended way of amplifying an acoustic, down here in the Quiet Room!) can connect to the two channels independently, as the two identical channels allow both systems to be used in conjunction with one another. This can give the player the best of both worlds, with the crisp clean attack of the piezo systems and the warm natural body sound of the internal mic really complementing each other and creating a perfect blend.

Channel one features a standard 1/4" Jack input, while channel two has an XLR input. Both of the A1+ amplifier's channels come loaded with a 3-band EQ, which consists of a Bass control, Swept Mid control and Treble control and are completely independent of one another.

The amp also has an auxiliary input with volume control which allows for some versatile connection options such as an mp3 player for backing tracks, and also features a useful anti-feedback control with a phase button.

The A1+ is fitted with an enhanced DSP 16x digital FX module selectable to either or both channels via pan control. It also comes equipped with a phantom power option and in addition, includes a balanced XLR DI (Post EQ/FX) with ground lift on rear panel and an FX loop. Even better, the newcomer also comes complete with a footswitchable Master MUTE facility.

Build wise, the A1+ is packed into a compact ‘Kickback’ cabinet with a 'Tuffstuff' finish, which is an extremely tough, ultra-durable polyurethane coating, and comes with a built-in pole stand mount. The A1+ has increased headroom with an 80W power section and improved frequency response thanks to its high quality dome tweeter and an 8” bass driver.

OK, so that's the technical data out of the way. How does it sound? Well, check out the video, to hear for yourself  but I started out by connecting a good quality Tanglewood electro-acoustic to channel 1 and set everything to a flat position, essentially to hear how it would sound coming straight out of the box. A good amp should sound good no matter what settings are dialled in and the resulting tone was very good indeed - extremely usable, even with everything set to flat. The A1+ seemed to bring out all of the acoustic characteristics of the guitar's tone with relative ease. Further tweaking with the EQ allowed for a wide variety of sounds which would suit even the most discerning players and the thing that struck me was that no matter how I changed the EQ, all of the resultant tones were tones that were just very usable.

Next, it was time to checkout the onboard DSP effects. The effects controls consist of various multi-effects, reverbs and chorus effects. Going through each effect was a nice surprise as, again, every single setting produced some great and more importantly, usable. Sounds at a simple turn of the rotary control.

There is no doubt that the Laney A1+ represents a good step forward from the original A1, already a good amp in its own right. The new version is packed with features and clearly has been very carefully (and cleverly) voiced so that somehow it always sounds 'right'. It's hard to find how to put that into words so what I would say is listen to our recording of it, then try one for yourself. We think you'll be amazed at how such an inexpensive combo can compete tonally with far more expensive rivals. The A1 + is a great quality product at a great price point.