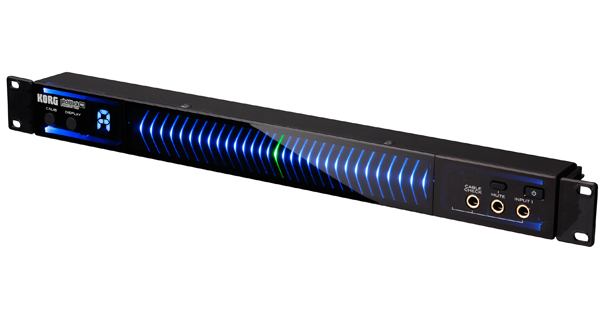 It's hard to get excited about a tuner; it doesn’t do anything for your tone, and it won't make your solos cut through better. However, we can't do without them. There's nothing worse than having to suffer an out of tune guitar, so investing in a decent one is money well spent. There are so many on the market at the moment: pedalboard types, mini ones, tuners that clip to your headstock, tuners that double as metronomes - and that's not to mention apps for your mobile devices. With so many on offer it's hard to decide where to splash your hard earned cash. I suppose you first need to decide what context you are going to be using said tuner. Does it need to be portable, mounted on your pedalboard, thrown in your gig-bag, on a racked for use in a studio or a live rig? If it's the latter, enter the Korg Pitchblack Pro Tuner!

Korg claims to have produced the world's first rackmount tuner, the DT-1pro, which appeared in 1987, and since then the company has continued to produce classic models, the latest offering being this ultra-lightweight, thin rackmount tuner with the highest visibility of any “3D” tuning meter. Its key features are

Plenty of things to offer then, so how is it in use?

Pulling it from the box, it's instantly clear that the Pitchblack PRO looks the part, feels well made and is very light and sleek. Rackmount brackets were included, but for the purpose of our video we just set it up on a music stand. It needs a standard 9V power supply to drive it, by the way, as this unit doesn’t have an option for battery power.

One thing to note is that despite its appearance, the Korg doesn't have to be contained in a rack. You can also put the brackets on the bottom to make it into a stand, or simply fix it to your pedalboard. Whilst it's slim, though, it's very long (rackmount length clearly...) so you would need a fair amount of free space on your board if you wanted to do that.

Setting it up was a breeze. You can change the calibration of the tuner if you wish to tune to anything other than the standard 440 Hertz. The regular tuning mode means you have to get the centre LED to light on its own. Blue LEDs will show to the left if it's flat or to the right of the centre green one if it's sharp. Note names are displayed to the left, and you can use it as a chromatic tuner, giving you the ability to check intonation anywhere on the fretboard.

The regular function was very good, with the LEDs shining bright despite being under our studio lights. It was clear to see and use and was very accurate. There's no doubt that would look very cool indeed lit up in a pitch black venue!

Pressing the display button shows what current tuning mode you are in, press it again and this gets you to the next one which is strobe. This function looks good and works OK, but I personally found it a bit much on the eyes! It's also very sensitive - I might even suggest a little too sensitive. I was never able to get the strobe to completely stop, even with the finest tuning peg adjustment. Fantastic if you are into real real fine tuning, but maybe I'm just not that patient...

The third function is half strobe, which is much less fiddly and easier on the eyes than the full-on strobe. Similar to regular tuning mode, if it strobes to the left it’s flat, to the right its sharp, get it to just light the middle LED and you’re good to go.

The mute button is a great feature to enable silent tuning, as is the cable tester. Unfortunately we didn’t have any broken cables to test it, but I'm certain it will work just fine.

Overall this is a great, professional quality,  rackmount tuner, packed with different display modes, mute button, and a cable tester. It also looks really fantastic! What more could you ask for from a humble tuner?