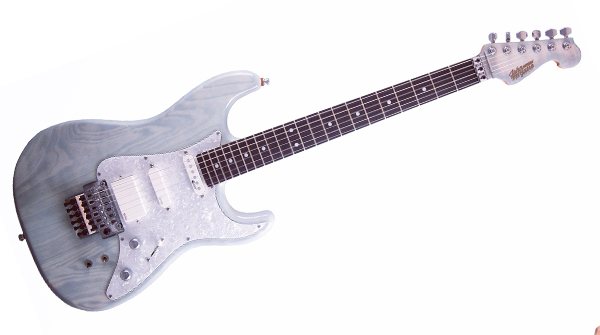 Introducing the JMG Valley Pro. In order to tell you about this John McGuire Guitars Valley Pro, I first have to give you some background on how it came to be. Some of you may know my preference for using vintage Valley Arts guitars, and many of you may be too young to even know who or what a Valley Arts guitar is. The name 'Valley' Arts started out as a shop in the late '70s in Hollywood where all the big gun names would take their guitars to be hot rodded, or to have a superstrat built from scratch, or even just to hang out and jam and swap stories about the latest studio session they had just done. The main guy behind the Valley Arts shop was a fine luthier called Mike McGuire. As business grew, a small factory was opened making beautiful custom order guitars called the Valley Arts 'Custom Pro'. Things really took off for Valley Arts when Larry Carlton and Steve Lukather endorsed the brand. Check out any '80s Toto clips and you will see Luke playing a Valley Arts guitar. Many of the best players in the world came to Mike McGuire to order a VA Custom Pro and in 1989 while I was recording my first real studio album in LA, I had an introduction from Steve Farris of Mr Mister to Mike McGuire at Valley Arts who built me a guitar I still own and love, serial number 0555 Custom Pro in one piece faded burst swamp ash with a maple neck, EMGs and a Floyd Rose.

In mid to late 1992, a fire decimated the business. Dreadfully under-insured, the choice was either to close the business, or sell the Valley Arts brand, which Mike did, to the Korean giant Samick. Samick ended up buying the name and carried on building its version of a Custom Pro which unfortunately killed the quality and the credibility of Valley Arts. That era of VA was a sad version of what the guitars used to be, and it wasn't long before the big names stopped using or being seen with a name now associated with cheap and not very distinguished guitars.

Main man Mike McGuire was snapped up by Gibson in Nashville to oversee production of their custom shop guitars and McGuire's son, John McGuire, was given a job there where he honed his skills surrounded by the best luthiers in the business, building beautiful Gibson Custom Shop guitars, under the watchful eye of his father. Gibson actually bought back the Valley Arts name to bring the Valley Arts brand back to America and again an attempt was made to recreate the mojo the originals had. This was nothing to do with Mike McGuire and while the Gibson era valley Arts were OK, (certainly better than those Samick had offered!), they were still not in the same league as the original Hollywood factory Custom Pros, of which only around 2,500 exist.

John McGuire eventually went into business building his own beautiful guitars called the 'Tradition'. Craftsmanship and quality were as good as it can get and back in May 2014 I got handed a John McGuire Tradition to review for GI (see GI Issue 25 - Ed). I was very impressed - enough to give it four and a half stars in our review. It was doubly pleasing because as I had been playing John's father's guitars since 1989. After we published the review, John got in touch and thanked me for the favourable review and knowing I played his father's guitars, carried on to talk about the idea of launching a modern version of a Valley Arts Custom Pro. It was to be called the JMG (John McGuire Guitars) Valley Pro. I agreed it was a great idea and would he put me down for the first one, and after a deposit to get it rolling, my Valley Pro was born.

This Valley Pro is serial number 001. It was hand built by John to the spec I requested, and it has Valley Arts DNA running through it. This is a bespoke instrument and if you order one from John, he will personally build you a Valley Pro in exactly the specification you want, which means body wood, trem, colour, neck size fingerboard, everything! In standard form, a JMG Valley Pro will have a Floyd Rose with a back route for maximum upwards pull, EMG 85,SA,SA pick ups, a nitrocellulose burst, solid or translucent finish, an oiled neck with maple, ebony or rosewood fingerboard with 6105 frets, a volume and tone on a three ply pickguard. John will accommodate variations on this theme too, just like the old Valley Arts factory would build you a custom pro however you wanted it, so for instance you may want a Wilkinson or Hipshot trem instead of a Floyd, or your choice of passive pick ups instead of EMGs.

I threw John a few specific curve balls on ordering this guitar. The main one being I wanted a Fernandes Sustainer pickup in the neck position. I actually sent him a Fernandes guitar to strip out the neck sustainer pickup (because I knew it was a good sounding neck pick up when not in sustainer mode) and fit it to my build, which is not an easy task by any means. Next I wanted a really fat neck, bigger than most! Fat necks add so much to tone and resonance on a guitar and I find them very comfortable, although I'm at home on most necks. He delivered on that too and the neck on 001 is big with a serious grade flame running through it.

Next, just like my first Valley Arts guitar, I wanted a super lightweight swamp ash body. Light swamp ash is a beautiful sounding tone wood that barks in the mid range, and has a tight low end. The one piece body on 001 came in under 3lbs, which is very light indeed. We discussed colour and I wanted a modern version of sonic blue, but I wanted it translucent to see the grain in the swamp ash. The result is a lovely light modern looking blue that can look a different shade depending on the light. If you want this colour, then call it 'Casswell blue' and John will know the shade you mean!

All JMG guitars are Nitrocellulose finished which is labour intensive to do but is the no compromise way of doing things. I also wanted an EMG 89 splitable humbucker which would go from single coil mode to humbucking mode via a push pull volume pot. The ebony fretboard and pearloid pick guard finished off the look I had in mind. The end result is a guitar that looks and sounds superb, with added fun and usefulness of a sustainer.

As each guitar is hand built by John himself, you aren't going to be able to walk into a store and find one of these but as John builds up stock, a choice will become available of ready built guitars in the USA and Europe, the latter via Qguitars in the Netherlands. But there is nothing better than ordering your own Valley Pro, which gets to have your name on the neck plate. I would jump in quick while the serial numbers are low. I know 002 is already sold and that was a deep translucent burgundy colour with black hardware which looked great.

You'll be searching a long time to find a pre 1992 Valley Arts Custom Pro for sale anywhere, but a JMG Valley Pro built to your vision is the 2016 modern equivalent and carries on the Mike McGuire DNA.

I know this is not the most unbiased review I've done, but this is the launch of a cool looking, credible, rare, hand built, bespoke guitar which I wanted to share with you. Get in early and you'll be in time for a seriously low serial number, which makes no difference to the quality of the guitar, but is very cool. I'm already in talks with John about my number 2 JMG Valley Pro.