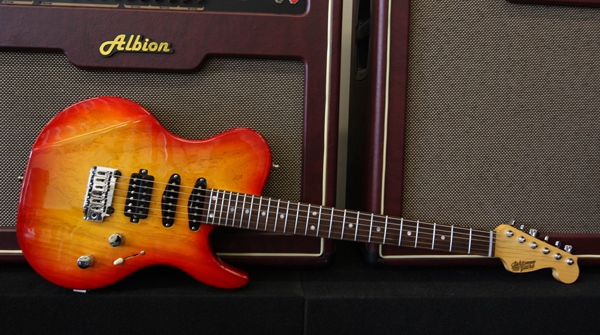 “Can I review a John McGuire Custom?” asked Michael Casswell. “Don't you mean a Mike McGuire?” “No...let me explain...”. A few weeks later a superb looking superstrat arrived from McGuire's Somerville MA workshop, via his distributor in the Netherlands. But was it as good as Mr. Casswell had been hoping for?

Before we talk about our review guitar, we're going to need a quick history lesson about the heritage behind John McGuire guitars. It starts with a company born way back in the '80s called Valley Arts guitars. For those who follow my Lick Library DVDs and Guitar Interactive contributions, you may often have seen me use these very rare superstrats, equipped with EMG pickups and Floyd trems, and wondered what they are. Well now you know! Valley Arts guitars were the choice of the guitar elite back in the day, with endorsers such as Steve Lukather, Larry Carlton, Jay Graydon and Steve Farris.

Valley Arts guitars were bespoke instruments that came with the highest quality tonewoods, hardware and finishes and were considered the best of the best. The company grew from a small shop in Hollywood run by a guy called Mike McGuire, who would repair, set up and build custom guitars for many of the LA name players, which then led to a dedicated Valley Arts factory opening in the mid-'80s building superb Strat-style guitars that most could only dream of owning. In 1989 I walked into that factory, met Mike, who helped me choose the wood for my very own custom built guitar, which has pretty much been my number one instrument ever since.

Disaster struck in 1992 when the factory burnt to the ground, which marked the end of an era for the name 'Valley Arts' with only around 2,600 guitars having been built. Under-insured, the Valley Arts name was sold off to a Korean company, which churned out nasty, cheap instruments that although they were called Valley Arts Guitars, were really just an insult to the name. Mike McGuire, meanwhile, was snapped up by Gibson and asked to oversee the Gibson Custom Shop, in Nashville, which he did right up to his retirement a few years ago. Gibson did actually buy back the Valley Arts name from Korea in an attempt to bring it back to an all-American concern. So you can actually buy a more modern Gibson built VA guitar, but again, compared to the pre '92 factory fire, hand-built beauties, they... well, let's just say they weren't the same! McGuire had nothing to do with the production of the Gibson era VA's, by the way, because he was too busy building the best Custom Shop Gibson guitars money could buy. Phew... history lesson over.

Fast forward to today with these John McGuire custom guitars. John is Mike McGuire's son and is following the family tradition by building his own, no compromise, instruments, using today's best hardware and tonewoods but with some fantastic innovations. The guitars have a cool modern look that is also traditional and grown-up in design. John will accommodate you with any finish or spec you want, but before you go asking him for something that you "think' you might like, check his website johnmcguireguitars.com where you can you see that the guy has pretty much thought of everything or improved on things we have all put up with for decades. Strat style, Tele style, hardtail or trem, humbuckers or P90 in any finish you like, John has it covered.

OK, time for the review guitar, which we were kindly loaned by John's Dutch distributor, Peter Herwegh of QGuitars (www.qguitars.nl).

Let's start with the finish. John only uses nitro finishes, which is much more labour intensive to do and not as tough as your average poly finish, but allows the guitar to breath and resonate to its fullest. It also gets better with age as it naturally wears. Everyone loves the look of relic'd finishes and usually a brand new relic is trying to copy the look of a nitro finish that has been played for 30 years. Poly finishes never take on that cool look in the same way, unless it's done for you at the factory, and for which you will be charged extra! Personally I only want marks on my guitars that I have put there and that tell a story, and the trend for worn guitars that are brand new does make me laugh.

John does some simply stunning colour stains and also has a trick where he will actually scorch and burn the wood to bring out some amazing grain patterns. Our review guitar was a conservative looking tri-burst. It's very vibey but not my personal choice compared to what John can do.

Constructionally, this guitar also has my favourite tonewood which is swamp ash (the same as my first number one '89 Valley Arts guitar). Swamp Ash is super light, very resonant and has a tight low end with a great bark in the mid range. John's guitars come in all of the usual proven tone woods, and he selects only the best grade of wood, which is getting harder and harder to do nowadays since we have pretty much sucked the forests dry and many restrictions to what is available now apply.

The pickups are Vaults, made by 'Tone Vault Technologies'. These are tweaked to John's specs and certainly sound fantastic. If I had to describe them, I would use words like 'sweet', 'clear' and 'organic'. Pickups for me either have that certain 'mojo', or don't. These have it! Nice amount of output too, without the sweetness suffering, helped a lot by the huge natural resonance from the guitar. If your guitar resonates, then your pups don't have to work too hard.

The neck feels great with a substantial D shape to it. More wood on the neck always means more tone and added stability. This guitar also has 6105 frets, just like the old Valley Arts guitars. These frets make string bending and vibrato a breeze. The neck has a Gotoh side adjuster close to where the neck meets the body, too, but I doubt you would ever have to touch it. We also have a 10-16 compound radius, so again you can get a slick, fast feeling set-up without your bends choking out. The neck joint John calls the 'Tone Socket' which gives the guitar the resonance of a glued-in neck and takes just a half turn of an allen key to release. Again, Valley Arts experimented with this idea and only 16 guitars had this more expensive option.

Our review sample came with a 'Hip Shot Flat' trem which works absolutely superbly. I gave it a quick tweak and got the G string pulling up over a minor 3rd and dive bombing to slack, with it never going out of tune! It handled everything I threw at it but always came back to perfect tuning. This is aided by some important factors. Firstly, the nut, which is nylon, is as hard as hell and very slippery. Secondly, the locking hip shot tuners. Thirdly, John has designed the guitar with direct string pull. This means the holes for the tuners are different to most guitars in that they follow the taper of the fret board from the bridge to tuner rather than hitting the nut then going straight to string pull. Simply put, the guitar is designed properly and stays in tune better than most guitars out there. The arm also has a little grub screw to keep it where you want it. Simply superb all round.

John has been around guitar building and what the best guitar players require from their guitars all his life. His dad was one of the best luthiers in the business and clearly attention to detail is in his blood. These guitars are up there with the best in my opinion and as you can hear from our video, they sound absolutely superb!

It may seem strange giving a guitar this expensive that extra half a star we award for value but a handbuilt guitar that will last a lifetime and deliver the highest possible quality for under $3,000 is great value for money! If you get the chance, check one out and we're pretty sure you'll agree.