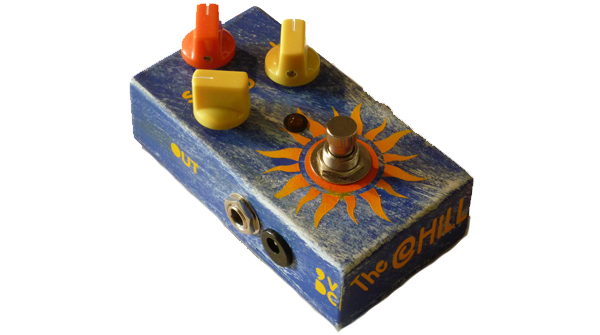 At first glance anyone might be forgiven for assuming that Jam Pedals are the progeny of an eccentric Californian effects guru, or possibly even a British electronics boffin with a penchant for retro tones and leather elbow patches on his tweed jacket!

However, if we were to tell you that these striking-looking stomp boxes are actually manufactured in Greece, you'd probably be as pleasantly surprised as we were!

The majority of boutique effects pedals base their very existence on claims that they capture the unique sounds of highly sought after vintage stomp boxes and Jam Pedals appears to have a particular penchant for the likes of MXR, Electro Harmonix and some of the early Roland units, like the CE-1 Chorus Ensemble. To fully capture the correct vibe, Jam Pedals uses period correct circuitry beefed up with NOS ('New Old Stock') components that accurately replicate the right types of vintage chips, transistors and resistors according to the type of effect required.

The Jam Pedals range currently includes roughly a dozen pedals and includes at least two different types of fuzz box, an overdrive, distortion pedals, a very nice analogue delay (plus a variant with extra features), boosters, a wah wah and a handful of modulation effects, including the Chill tremolo and Waterfall analogue chorus featured in this review.

Each pedal is also individually hand painted, making each Jam pedal slightly different from the next, which adds another unique twist. The paint isn't lacquered, though, and we found evidence that the paint had already started to chip slightly around the edges, which makes us wonder if these painstakingly hand-painted finishes would withstand six months of hard stomping? You'll have to ask someone who has been using one for a while, I guess!

The Chill analogue tremolo pedal is a sine wave tremolo pedal that offers a soft, slightly more modulated tremolo that sounds closer to a vintage Vox amplifier than the rather abrupt 'on-off-on' judder usually associated with this effect. Besides offering true bypass circuitry the Chill is powered by a choice of a single 9v battery or mains and is compatible with a standard Boss PSU mains adaptor. The Chill only draws 5mA of power when the pedal is on, making it less of a drain on your mains adaptors when running a healthy cluster of stomp boxes on your pedalboard and speaking of pedalboards, the tiny box only measures 111x 60 x 32mm, guaranteeing that it helps to save a precious amount of room.

Despite being somewhat under-rated, tremolo is nevertheless very evocative, instantly conjuring up images of spy movies, atmospheric film noir soundtracks or sweeping desert vistas. From a more practical standpoint the Chill also doubles up as a handy clean boost; simply turn down the central rotary 'Depth' control to zero and use rotary Level knob to set the desired level of clean boost.

The Chill delivers a clean, noise-free performance and whilst you have to be prepared to shell out a fairly serious wad of cash to enjoy its benefits, it will reward the committed player with a very distinctive effect whilst the clean boost option also feels like a real boon.

The Waterfall analogue chorus is another device the definitely takes its cue from the pre-digital era. Whilst modern digital effects have their benefits - low noise and reliability among them - there is definitely something audibly different about vintage analogue chorus boxes. They sound chunkier and richer somehow; the comparative inefficiency of those old-school analogue components definitely gives the chorus a warm grainy quality that makes today's pristine digital accuracy sound very thin and stiff by comparison.

Used clean or with distortion the Waterfall nails those vintage analogue tones absolutely squarely on the head! Overdriven and clean tones instantly sound thicker and more dramatic, yes it's an old school sound and whilst chorus in general has fallen from favour lately due to being over-used during its '80s halcyon days the Waterfall nevertheless evokes the spine tingling thrill of hearing those old Police and Rush albums for the first time.