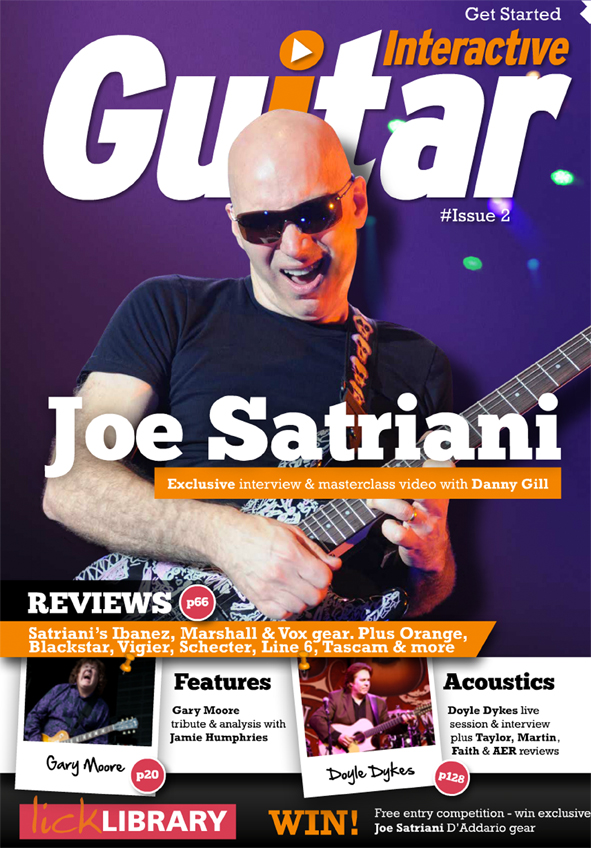 There's no law that says you have to use the same make and model as your guitar hero. As we saw last month with David Gilmour, a Fender Relic Stratocaster is the obvious route to getting Gilmour's distinctive tones, but there are other - and cheaper - ways. Much the same is true with the legendary Joe Satriani. As Danny Gill demonstrates in this issue's technique lessons, when he gets the Satch sound from his own ESP, it's possible to approach the maestro's trademark tones in a number of ways. But some things are essential. You need great pickups, a 'superstrat' style guitar and an advanced trem to enable Satriani's playing gymnastics. So why not go the very source? We borrowed two Ibanez Satriani models - the top of the range JS 1000 and the considerably less expensive JS100 - to see how they fared.

The Ibanez JS1000 (ours came in the handsome Black Pearl finish) offers a basswood body with a bolt-on maple neck and a rosewood fingerboard with 6105 style frets and abalone dot inlays.   It's not a heavy guitar, so long sessions shouldn't pose any problem and, as you'd expect, access to the entire fretboard is a dream.

Hardware wise, the JS1000 features a pair of DiMarzio humbuckers - a PAF-PRO at the neck and a FRED at the bridge. Both have been specially designed by DiMarzio for Satriani and even if DiMarzios aren't your usual choice, these are right for this guitar and the job it sets out to do.

Equally right is Ibanez's own take on the floating bridge concept, called the Edge Tremolo. They call it that because of the knife-like edge pivot surfaces used to reduce friction and make for lightning fast, yet smooth, movements in both directions, up and down. The Edge features individual fine tuners for each string and a stud lock for stability. Up at the other end of the neck, a locking nut clamps the strings to help keep the beast in tune.

Controls on the JS1000 are simple to understand and use. You have a high-pass filter on the volume pot, so that higher frequencies are maintained if you throttle-back the volume and both pickups feature coil taps, enabling you to switch between single coil and humbucking configurations.

As you'd expect from a Japanese made guitar, our sample was flawless and not only played well but gave that characteristic Satriani sound - particularly when used with Satch's own-designed Vox pedals and his recently adopted Marshall JVM.

There's no doubt that this is a fine guitar and for the player who won't be satisfied with anything but the same guitar that Satch uses it's the natural choice. That said, the days of the cheap Japanese-made guitars are sadly long gone and this Ibanez - though well made and sounding like a dream - costs more than some boutique brands, which you might also want to consider.

Price is a problem for all the big brand guitar makers. Think of it this way. If Ford made a car as good as a Ferrari, they should be able to charge similar money for it, shouldn't they? Well, perhaps - but some people put a lot of store by exclusivity and even wearing Joe Satriani's seal of approval, an Ibanez for this sort of price may seem a tad expensive. On the other hand - it's undoubtedly The Real Thing!

If the asking price of the top of the range JS1000 makes your eyes water, then how about the JS100 - which sits at the other end of the Ibanez Satriani signature range? Our sample came in Transparent Red and that was the first sign that, though cheaper than its sibling, this was also a fine-looking guitar. In fact, from the back row, most of your audience wouldn't know which you were playing.

In terms of materials, the JS100 is surprisingly close to the JS1000. It too features a basswood body, a maple neck and a rosewood fingerboard but as you start to dig deeper, you begin to see where Ibanez has made choices to get the price down. To start with, it boasts a non-specific 'medium gauge' fretwire (though we found no faults with it) and the pickups are not top-drawer DiMarzios, but a pair of humbuckers of Ibanez's own design, called the AH1 (it stands for Axis Humbucker - neck) and AH2 (bridge). Aside from, their placement, the main difference between the two is that the bridge model features Alnico magnets, while the AH1 at the neck, features a ceramic magnet - reckoned by Ibanez to be more suited for chord playing. Interestingly, Danny Gill felt he actually preferred the sound of these to the JS1000's DiMarzios in some ways - though he said it was a very subjective call.

The JS100 features a similar design of Ibanez Edge trem to the version used on the JS1000, and controls for the pickups come via a push/pull function which splits the pickups between single and twin coil (humbucking) operation.

Again, this Ibanez struck us as a likeable guitar - certainly capable of getting pretty close to the Satriani sound. That said, the longer we played it, the more we began to realise that it didn't reach the heights scaled by the premium JS1000 (as you should expect, given the considerable price difference). But perhaps more worryingly, several niggles began to trouble us. The neck joint wasn't 100 per cent rock solid and we were getting occasional sticking problems with the trem bridge.

In fairness, both faults could easily be rectified by your local guitar shop - but it does show why you are always better buying direct from a trusted guitar retailer where you can and insisting that the guitar you buy is set-up by them as part of the purchase price.

The JS100 is a great way for players to get the magical Satriani look and feel - the sounds too are all there - but at this sort of price it's up against some pretty stiff competition.