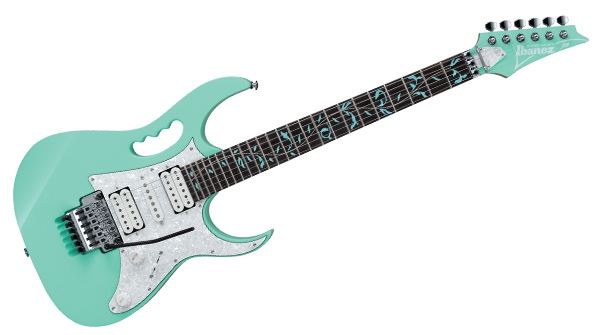 There are only 100 Ibanez JEM-EVO guitars being made - each one a hand-crafted replica of Steve Vai's own legendary guitar - issued to commemorate the guitarist's 25 year association with the company. Now, for the first time, Ibanez is also offering a more affordable version of the Vai masterpiece, the JEM70V. iGuitar was privileged to be loaned one of the only two JEM-EVOs coming to the UK. We also borrowed a JEM 70V to compare the two.Tom Quayleput them side by side and let them shoot it out!

Before teaming-up with Ibanez to produce the JEM series of guitars, Steve Vai was using typical '80s super-strats like Charvels and Jacksons. He often customised these early instruments with modifications to the whammy bar cavity, scalloped the upper frets and added deeper cutaways for easier access. Once his career began to take off a few years later, it was inevitable that such a stunning player would be snapped-up by a major guitar brand and the honour, when it came, went to Japanese guitar masters, Ibanez.

Thus, the Ibanez JEM was born in 1987 and it certainly didn't disappoint, being the perfect accompaniment to Steve's radical and creative technique and creative and featuring all of the innovations that Vai had attempted on his previous guitars such as the Monkey Grip, Lion Claw bridge cavity, super-slim 24-fret neck, scalloped upper frets and deeper cutaways. 25 years later, it has proved to be one of the most successful modern designs and the inspiration for a whole generation of new players and guitar builders.

Over the years there have been many iterations of the JEM series but for 2012 Ibanez has released two really interesting variations that add something new to the design, guaranteed to excite both the collector and the more budget-minded player. The JEM-EVO is an incredible artistic pursuit to create a carbon copy of Steve's original EVO guitar, complete with every ding and scrape, crack and flaw. It is a real marvel to behold and represents the highest level of Ibanez's Japanese output. The JEM 70V, meanwhile, is a little closer to the other end of the price scale, occupying territory that a JEM has never previously entered, being a budget-friendly Indonesian made 'Premium' model, attempting to match the quality of the Japanese models at a more affordable price. Before you reel in horror at the idea of an Indonesian-made JEM, rest assured that some of the best factory produced guitars iGuitar has seen in the past year or two have been made in Indonesia. Several major brands are now being produced there and we have seen some stunning results.

As you can imagine, we started by checking out the EVO model (I was too excited not to!) only to find out that we had model 1 of 100! Well, that's how it seemed. Later, we learned that to avoid disappointment, Steve Vai has ordained that every one of them is being numbered one out of a hundred. Oh well!

There is always a sense of occasion when you are confronted with something as rare as this and you know, as soon as you see the included heavy-duty case, that something amazing awaits inside. Just to prolong the suspense, let me add that this is easily the best Ibanez case I've seen and would survive a direct hit, so it's perfect for the collectors, at whom I assume this guitar is aimed.

And once you finally pluck-up your courage and open the sarcophagus? What you find within is a guitar that looks exactly, stunningly, like Steve's original guitar, in every way possible. Exactly as you'd hope, the EVO features an alder body, maple neck and rosewood fretboard with the iconic abalone/pearl 'Tree of Life' inlay. But those are just the bare facts of the matter. Ibanez has surpassed itself here in the level of detail in this re-creation. Every single scratch, dent and flaw has been reproduced in painstaking detail, right down to a simulated neck joint crack that matches the actual crack on Steve's guitar. It even has tape appearing to hold the neck pickup in place, in honour of the original!

Whether you're into the idea of aged/stressed guitars or not, you have to appreciate the sheer craftsmanship and artistry that has gone into this guitar. All the hardware is exactly as you would want it, from the monkey grip, the DiMarzio Evolution pickups in an HSH configuration, the original Edge tremolo with Lion Claw (some say this is the best version Ibanez ever released and I agree), a locking nut, scalloped frets, jumbo Dunlop fret wire and back stops to support tuning stability. The EVO logo is present and for the sake of detail Ibanez has even used Velcro to attach the back plate and pick holder as on Steve's guitar. This is a JEM through and through but not just any JEM - this is Steve Vai's actual guitar, or as close as you're ever going to get to it! What's more, Mr Vai has even signed every single one, in the exact place on the guitar where his own bears the signature of the late Les Paul, enscribed on the latter's 95th birthday.

As you would expect, the EVO's playability is supreme, thanks to a super low action, matched with the slimmer than normal neck profile and a fantastic set-up. The EVO almost plays itself and feels just like a well-worn friend that you've known for 25 years. Ibanez has left the neck finish as close to bare as possible, simulating years of use and as such it feels fast and smooth. The Edge bridge stays in tune perfectly, thanks to the back stop, and performs all of Vai's whammy bar dives and squeals with perfect accuracy. The Evolution pickups are tight and aggressive sounding, with a clarity that gives almost a Hi-Fi like tone. The neck pickup is creamier and allows for a full range of sounds from warm cleans to thick, saturated leads, all the while retaining clarity. This is a very versatile guitar thanks to the HSH set-up and can reproduce both Strat and Les Paul like tones in addition to a wide range of sounds of its own.

So is the JEM-EVO as good as we hoped it would be? Unquestionably! Whoever buys one of these guitars is getting as close to owning Steve Vai's own guitar as it could be, without buying it off him and for a collector that accuracy is what matters.

It does, of course, come at a very substantial price, so what about those of us who would dearly love to own something like it, but don't seem able to find that much loose change down the back of the sofa?

We were expecting a bit of a disappointment from the JEM 70V, to be frank. How could you not be a bit underwhelmed after playing a guitar as stunningly good as the EVO? But we were wrong. Very wrong. In fact I was surprised to find that this guitar feels almost as good to play as the EVO itself!

True, the Indonesian version features a different construction in order to save cost, so we have a sea-foam green basswood body with a five-piece maple/walnut neck and a rosewood fretboard. The rosewood grain is nowhere near as dark and tight as the EVO's but it still looks great sporting the 'Tree of Life' inlay in matching sea-foam green. There's no abalone or pearl going on here either, but the inlay work is still flawless. All the JEM's hardware is identical to that on the Japanese model, too, featuring proper DiMarzio Evolution pickups, Edge bridge with lion claw and monkey grip. The sea-foam green finish won't be for everyone but I loved it and it looks a lot better in person than in pictures. The fretwork, which can often be a problem on lower priced models, was also very good with no sharp or unfinished ends and whilst the neck is a little thicker than the EVO model's, the set-up on our sample was very good, with a low action and even feel across the whole range. There were a couple of tiny finish flaws around the neck joint but nothing to cause any concern. This is undeniably a very well made guitar.

But the real surprise is in the playability and tonal performance. This 70V model is a superb guitar to play, featuring some amazing tones and a set-up that plays almost as easily as the EVO version. This is a real triumph for Ibanez and an impressive achievement, given that their Japanese instruments are as good as it gets. The neck feels incredibly comfortable and smooth and thanks to the same Edge Bridge and locking nut, tuning stability is perfect, even after very aggressive whammy bar antics.

Tonally the 70V is in the same world as its bigger brother and has a tight, aggressive output that is perfect for harder Rock and Metal material, giving a gorgeous tone for lead work that really responds well to pick attack and volume changes. The HSH set-up is very versatile and both guitars surpass their stereotypical image, being useful for many other styles too.

Both of these guitars represent the best of Ibanez's work and it's a real testament to the company's commitment to quality that they can produce an Indonesian made JEM that feels so close to the real deal. Whilst I love both guitars I can't justify giving the EVO a 4.5 or 5 star score as it is just so expensive. It's really for collectors only, which is a shame in a sense, as it's a supremely playable guitar that looks and sounds insanely cool too.

The 70V, on the other hand, seems like a complete no-brainer to me, providing you can live with the colour. True, it still isn't a cheap instrument but it sells for a fraction of the price of the 'real thing' and it gets terrifyingly, impressively close to it.