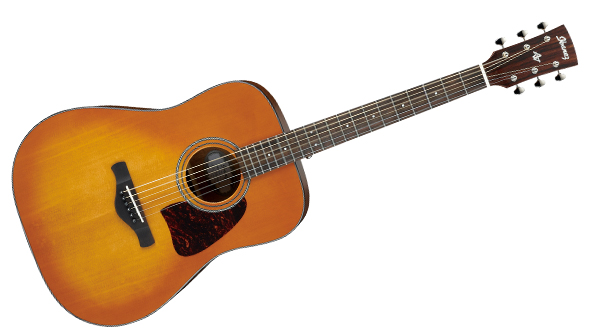 Say the name Ibanez and most people's thoughts turned to ultimate shred machines. But the Japanese guitar supremo has always made highly respected acoustics too which, arguably, have never quite achieved the recognition they've deserved. Are the new AW400s going to change that? Lewis Turner reports.

Ibanez may be best known for its solid bodied electrics but players who dig a bit deeper will no doubt have noticed how well respected the company is for its Jazz guitars, too. Then there are the Ibanez Artwood models -  a wide range of really nice looking acoustics which we feel tend to be a little overlooked among all the flash bang wallop of Ibanez's electrics.

The two guitars we are reviewing here are part of that Artwood series, which Ibanez says was crafted to produce a traditional as well as a modern guitar. Let's see how they've got on.

The 400 has an impressive spec sheet. It sports a mahogany back, sides and neck with a solid Sitka spruce top, set in a light violin sunburst high gloss finish. The guitar looks fantastic. The machine heads are traditional three a side Grover open gear tuners, which both looked great and worked well. They were however a little small, and if things started to get a little stiff they may become quite hard to turn for smaller fingers.

The mahogany neck is topped with a rosewood 20 fret fretboard that was a breeze to play. No problems with 'action of doom' on this guitar! Tricky chords and stretches were possible anywhere on the neck, with no fret buzz or intonation issues. Fret edges were smooth and the neck shape was nice and comfortable - thin enough even for smaller hands.

The 400 is a Dreadnought sized guitar which offers plenty of volume, depth and resonance. X bracing is used throughout and the overall finish and attention to detail on our sample was excellent. A rosewood bridge set with Ibanez bridge pins keeps the strings in place, there's a tidy looking scratch plate and a tasteful soundhole rosette, all of which finish of this classy looking instrument. The traditional combination of mahogany twined with a solid spruce top choice, especially in a big bodied guitar like this, means you get a solid tone throughout, yielding low end depth, and midrange definition, making a very dynamic guitar leaving open all your tonal options. This is the perfect guitar for pulling out at parties or around the barbecue for a good old strummy sing along and that's just what a good Dreadnought should be able to deliver. It will equally be at home with a good mic in front of it for live performance or recording. Easy to play straight out of the box. As the saying goes - what's not to like?

This is essentially the same as the 400, with exactly the same wood, hardware and finish. However, The CE version does have a cutaway and a pickup, making it an electro acoustic. The cutaway gives the opportunity to reach the dusty end of the board with relative ease, although you could argue that you lose some of the guitar's natural depth and volume, as you have removed a big part of wood. Well, that's the theory, but I can't say I really noticed a difference between the two unplugged. Once again the set-up was great, the action was a little higher on this guitar but I would say that it was nearer to what a “normal” acoustic action should be. Playing it was still a breeze with stable tuning and great intonation.

The 400CE comes fitted with an Ibanez AEQ-SP2 pre-amp and Fishman Sonicore pickup, which is a tried and tested found on many acoustics. The built in tuner was easy and accurate to use, as were the EQ controls. There's no middle control on this guitar, but I was able to dial in a variety of tones using the bass and treble. I'm also happy to report I didn’t have any feedback issues despite being close to a foldback monitor and rolling the bass all the way up. There was a slight loss of bottom end when plugged in, compared with the acoustic tone, but this is often a problem with placing a pickup in an acoustic. As we always say, the best option for amplifying an acoustic guitar usually is to use a mic, but that's not always (often?) practical and the overall tonal palette and dynamic range of the AW400CE remained authentic. There's no doubt Fishman's Sonicore is a fine pickup for this level of guitar.