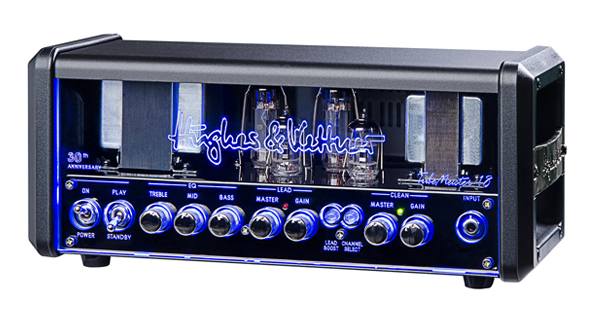 Hughes & Kettner is celebrating its 30th anniversary this year with special editions of its much-admired Tubemeister range. That, and the fact that we have noted Hughes & Kettner user Tommy Thayer interviewed in this issue, seemed like good reasons to take a look at one of its best-sellers in its anniversary form. The amp we chose was the Tubemeister 18 Anniversary head and the man we chose to review it? The one and only Tom Quayle.

To celebrate its 30th year of operation Hughes & Kettner has released an anniversary edition of its Tubemeister range of amplifiers. The essential design remains the same but the EL84 output tubes have been replaced with NOS (new old stock) Soviet, military grade EL84’s that are older than the company itself. There’s a lot of snake oil and mystique surrounding NOS tubes but there is no doubt that they were built to last for applications in military and aviation industries where reliability is paramount and to a level of quality not necessarily reached by modern manufacturers. H&K claims that this translates into higher clean headroom, more punch for overdriven tones and a more output than the standard EL84 variants. We were keen to put this to the test with Tubemeister 18 head we were sent for review.

The Tubemeister 18 is a small footprint, two-channel lunchbox style head that is designed for maximum tone and versatility in an easily transportable package. The unit is housed in a black metal chassis with a glass-effect front exposing the internal circuitry and tubes, resulting in a cool and modern looking amp. On display are a pair on 12ax7 preamp tubes and the aforementioned NOS EL84 power tubes, offering up to 18 Watts of output via the 16 and 8 Ohm speaker outs, with a built in power attenuator offering operation at 5, 1 and even silent operation. While operating silently, the amp can be used for recording with no speaker attached thanks to the included ‘Redbox’ speaker emulated DI, complete with a high quality XLR output for professional connectivity in the studio. The ‘Redbox’ has been an industry standard for years now and places the DI after the power amp but before the attenuation, giving the most authentic tone and feel for recording. A serial effects loop is also included along with H&K’s ‘tube safety control’ for automatic tube biasing, better longevity and testing functions for the power tubes.

The front panel of the TM18 is laid out very logically with a shared three-band EQ, master and gain controls for both channels and lead boost and channel select push switches. The controls are small but solid feeling and easily accessible with the lead boost and channel select functions controllable via any two-way footswitch (not included with the amp). Although the channels share the same three-band Bass, Mid and Treble controls H&K has really thought about this often limiting design feature by re-voicing the EQ filtering circuit for each channel, giving the optimum tone shaping for clean and driven sounds.

The TM18 is a very well-constructed and light weight head with an included soft carry case that will make transporting the unit a dream for those used to large, unwieldy amps. It’s also a good looking little head with a quick flick of the power switch producing a lovely blue glow permeating the front panel for an awesome look on stage or in the studio. The metal chassis protects the tubes well and H&K has included solid metal handles on either side that further strengthen the design and make stowing the amp in its gig bag easy and swift.

Plugged into our studio 4x12 the sound from the TM18 is surprisingly huge considering the amp's diminutive form. The clean channel has plenty of headroom and chime and can be pushed into a satisfyingly squishy crunch tone when the gain and master are pushed to their upper settings. At lower volume settings the sound remains tight and focussed with a harder feel that is great for clean single note lines and arpeggiated chords, especially when combined with some effects in the loop. The three band EQ offers a very musical range of tone shaping options even at the most extreme settings making it pretty hard to find a bad tone on either channel. Switching to the drive channel gives a range of tones from light crunch with the gain and master set low to huge amounts of modern scooped gain with the lead boost engaged.

With the attenuation set to 5W or 1W it becomes easy to achieve compressed Rock and lead tones with plenty of lovely power tube saturation at a sensible volume. Switching to 18W mode allows for tight rhythm tones that have as much pre-amp gain as you like but remain firm and responsive for palm muted power chords or down tuned madness. Even though 18W sounds like a low output, this is a loud amp at full tilt and will happily drive anything from a small 1x12 to a huge 4x12 set-up if required.

It’s hard to state exactly what the NOS EL84s are doing to the tone here without a direct comparison to the original but what we can say without a doubt is that they sound great and should provide you with the most reliable power tubes out there.

For a small, low wattage head the TM18 was already a big success for Hughes & Kettner, with a 36w version also available for those looking for more power. The addition of NOS EL84’s may or may not make a big difference to the sound of the amp depending on your perception of tone and what you prefer, but they will certainly give you extra longevity and should last for the lifetime of the amp. The price difference between the original and the anniversary model is not bank breaking by any means so we suggest trying both out if you can and seeing which one works for you - the bottom line is that the TM18 is a superbly built and sounding small amp that offers two channels of great tone coupled with silent recording in a brilliantly portable design.