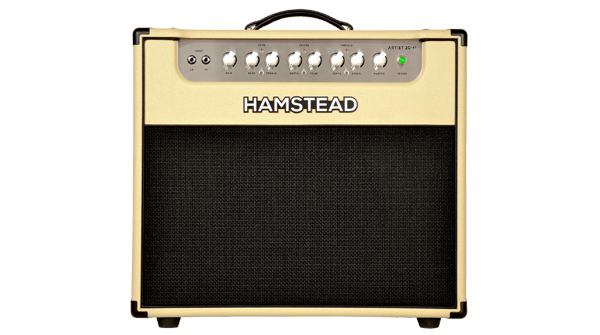 We spend thousands on guitars that inspire and excite us, even if we only own a modest little practice amp but really, due consideration and budget should be put into the other half of the equation, which would be your amplifier. There are many amps out there that will do the job, and then there are amps that really are something special. So let me introduce you to UK amp guru Peter Hamstead, who has decided to throw his hat in the boutique amp ring with this Hamstead 20+RT combo.

What we have here is a British designed and made 20 Watt cathode biased class AB amp that uses two EL34 output valves and three 12AX7 pre-amp valves. Peter has tried to keep the tone and values of iconic amps that were hand built and point to point wired many decades ago, but using safer and more reliable construction methods of his own design without any compromise in components or tone. For the record, Peter Hamstead's background is in avionics and radar, and he has designed this amp with a completely fresh viewpoint to achieve a great sounding amp that is individual in its internal design.

As soon as you plug in you can hear straight away this amp is all about quality. When the goal in amp design is about great response and tone first and foremost, you tend to get a purity and depth of sound that you just don't get from amps produced by companies that are primarily concerned with high production numbers and cheap labour costs. Yes, it's a story we've heard before, whenever a boutique amp maker wants to charge us a lot of money and it isn't always justified. But it certainly is in this case, as you can hear from our video.

Essentially, this is a single channel amp, but there are plenty of tones to be had from it. Firstly there is a switch at the back that can run the amp in Pentode or Triode mode. This affects the power amp section and gives half power/full power function with Triode giving you a squashier sound with more gain, and Pentode giving you a tighter bottom end that is snappier and louder in response. You also get a 'Voice' switch which gives your sound a nice mid boost. This is a bit like having an onboard boost pedal which you can engage manually by a switch on the front panel of the amp, or by the included footswitch. It just gives you more of everything and is voiced really well, with harmonically rich mids. So depending how you choose to set the core sound of the amp, there is plenty of touch sensitivity by your pick up choice and volume pot control on your guitar.

If you want bags of saturation and gain, then you should think of this amp as a fantastic blank canvas to push with pedals such as overdrives, compressors and boost pedals. Trust me the biggest and best tone is achieved this way and this is even how I run my own high gain heads. With everything up for maximum gain on the amp, you get a great crunch sound that you can easily push into high gain territory with your favourite overdrive. It certainly responds to pedals well, both to push the front end and in the series effects loop in the back.

RT stands for Reverb and Tremolo, and this amp has both. The long spring reverb is very musical and has its own depth and tone pots for extra versatility. The tremolo has depth and speed and has much more speed and sweep than most other amps I have come across with onboard tremolo. I remember the Peavey Delta Blues has a great on board trem, but this Hampstead version beats even that. The supplied quad foot switch gives you control over the voice function, reverb, tremolo and effects loop in or out.

Everything about this amp is bespoke and made to the highest standards. Even the mains and output transformers are custom wound in the UK to Peter's specs, while the Celestion G12-65 Creamback is one of the few Celestion speakers still made in the UK and is a nice choice. To me it's a warmer, fatter version of the lower powered G12 Greenback.

Visually, the combo looks fantastic and would have a real presence on any stage. The birch plywood cab is faultlessly covered in cream vinyl and I hear there will be more colour options in the future. Performance wise, it delivers a very loud 20 Watts which sounds to me like it would easily go toe to toe with any 30 Watt amp out there, and even some 50 Watters, so it will handle both small and large venues easily. You get a five year warranty but I am going to hazard a guess that the amp will give bomb proof service and reliability under normal conditions. And yes, there are head and combo versions available.

So there it is, a brand new amp from a new company, brought to our attention by GI contributor Mick Wilson, who first spotted this new name and who is now using one of these amps professionally. We've also just heard that Carl Verhayen from Supertramp is using a Hamstead amp, too and the word seems to be spreading fast among discerning guitarists. We're not surprised. This is truly superb product, beautifully made by someone who really knows what he is doing and which will produce results of the very highest professional standards. True, it's not a cheap amp. But as in guitars and cars, the best does cost a little more and the extra cost will soon be forgotten. I want one.