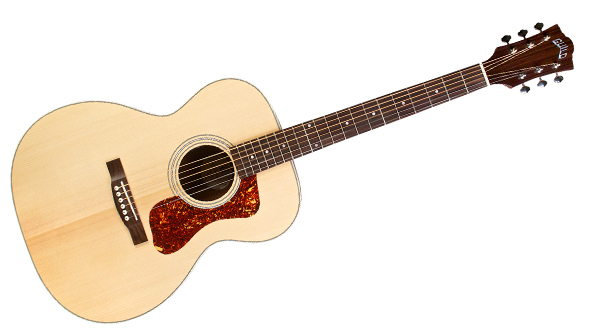 Since Guild was freed from the clutches of Fender, it has made an impressive start in re-establishing itself as a major force in the acoustic guitar world and we at GI Towers have been consistently impressed by the samples we've seen. Most of these have been in the Westerly series, named as a nod to Guild's move from New Jersey to Westerley, Rhode Island in 1967.

Back in 1953, Guild began producing archtop Jazz guitars that also featured pressed, laminated arched backs. This was a money saving move as it meant the company could avoid using the costly carved maple backs that had previously featured in Jazz guitars. They were very successful with players. Later, when Guild began offering flat top acoustics, these models also featured laminated arched backs and were similarly highly regarded. The arched back is said to help projection and tone and was one of the components in the much admired Guild sound back in the 1950s and '60s. Fast forward a handful of decades and Guild is now using the same technique with these Chinese made Westerley arched backs, which come in a range of sizes and formats, even including a 12-string.

Despite all that heritage and history, the new Guild OM-240E is certainly in the lower price range for a 'big brand' acoustic, but pulling it from the bag you certainly couldn’t tell from its appearance - it looks fantastic! If you are used to “normal” sized guitars this will appear a bit small and is classed as an Orchestra body shape. This size of guitar is proving now popular again with beginners through to seasoned pros, because they are often more comfortable, easier to play and transport. With advancements in woods and pickup technology you also don't lose much on the volume front, so recent years have seen a return to these smaller bodied types.

The OM-240E has a solid Sitka spruce top with laminated mahogany back and sides and a matte finish. Mahogany tends to offer warmth, depth with a focused mid range heavy voice, while the solid Sitka spruce top brings the top end ping to the overall tone making it ideal for finger picked Blues style playing, and Country strumming. Despite its comparatively small size, this guitar still resonates well and delivers a fair amount of acoustic volume - which is pretty clearly being amplified by the arched back concept.

Vintage open back tuners are fitted to the classy looking headstock, which were solid and held everything in tune, though I found the winders quite small which would make re-stringing a bit of an effort unless you have a string winder. The slim Mahogany C profile neck was a very comfortable shape, feeling much like a standard electric neck, and the rosewood board and fretwork were all smooth and well finished.

Our sample guitar was set-up really well, with a low enough action to make barre chords and lead playing a breeze but not so low as to cause fret-buzz or intonation issues.

The OM-240E also comes fitted with a Guild AP-1 Active piezo Pickup. This system uses soundhole mounted volume and tone controls, which keep everything tucked away. There was no built in tuner or any other EQ controls, so on first glance of this guitar you wouldn’t know it was an electro acoustic. I have personal issues with the soundhole mounted controls as they make altering volume and tone whilst playing almost impossible, however, they do work well and if you like everything neat, tidy and tucked away, then this could be the system for you. It's a high quality pickup so you don’t lose much of the guitar's inherent tone when you plug it in and there were no feedback or humming issues. The only thing I would say is that the Tone control didn’t have much affect rolled either way.

The OM-240E is a top notch acoustic guitar at a fantastic price, offering high build quality and great tone. Fitted with great hardware and a good quality pickup system it's hard to fault this guitar in any area. It’s built with playability in mind and it really is a joy to play with great tones and build quality. Beginners and seasoned pros will equally love this guitar. Looks like another winner from Guild.