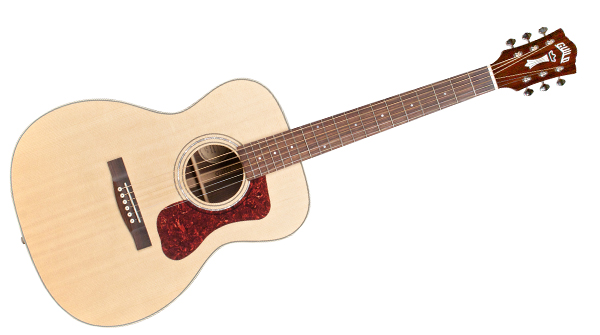 Guild celebrates its recent takeover with the launch of the eagerly anticipated Westerly Collection. Has the famous Guild magic survived the change of ownership? Bob Thomas finds out.

US-based Guild guitar production has been on a fair old journey over the years. Founded in New York in 1952, production moved first to Hoboken, New Jersey in 1956 and then to Westerly, Rhode Island in 1966. Production remained there until 2001 when Guild’s then owners - Fender - moved US production first to their factory in Corona, California, then to Tacoma, Washington and finally to New Hartford, Connecticut, the former Ovation factory! In the latest instalment of this long-running saga, Fender sold Guild to the Córdoba Music Group in 2014, at which point US-based production moved back west to a new manufacturing facility in Oxnard, California.

Guild’s newly-released Westerly Collection, though Chinese made, pays homage to those early glory days in Westerly, Rhode Island during which that iconic factory became renowned for exceptional craftsmanship and quality.

The Westerly Collection OM-150 that we had for review certainly lives up to the promise inherent in its name, even although Guild never did make an OM-sized guitar back in the Westerly days. The all-solid woods in this guitar are of spectacular quality. The close-grained sitka spruce top is beautifully and heavily silked, showing that it has been cut precisely on the quarter (as it should be), whilst the Indian rosewood back and sides are one of the finest-looking sets of that wood that I have ever come across. The mahogany neck and Indian rosewood fingerboard and bridge are of equally fine quality and, judged purely on the quality of the woods alone, this OM-150 is more than worthy of its link back to the Westerly factory.

The top’s X-bracing is scalloped as you’d expect in a good OM-style guitar, and there’s an abalone purfling ring around the soundhole. The top is bound in ivory and black ABS and a traditionally-patterned tortoiseshell pickguard completes the picture.

The rounded C-shape neck profile feels very comfortable in the hand and its abalone-dotted, unbound fingerboard has a 1¾” nut and is fretted to a very high standard. The scale length is 648mm (25½”), which is the standard for orchestral model acoustics (and for Fender electrics) which gives a slightly brighter sound than you’ll get on shorter-scale guitars such as those based on Gibson acoustics or the smaller-bodied Martins. This OM-150’s factory set-up is more flatpick than fingerstyle, but it would only take a little adjustment at the NuBone nut and intonated saddle to set this particular OM-150 up perfectly for fingerstyle playing.

Soundwise, this OM-150 produces exactly what you’d expect from a sitka and rosewood orchestra model guitar. You’ll get a wide dynamic range and clear articulation with both fingers and flatpick no matter how hard you hit the strings, and the Indian rosewood will give you a slightly scooped midrange feel due to the characteristic strong low end and singing treble clarity that you get from this combination of tonewoods, body shape and scale length.

Orchestra model guitars are especially popular with fingerstyle players although, in recent years, flatpickers have started to take to them as an alternative to the larger-bodied dreadnoughts due to their inherent fast response and clarity. This OM-150 is a very playable guitar that delivers everything that you’d expect from a guitar made of solid, premium quality woods at this price point. Straight out of the box it has an open, well-balanced sound that I believe will continue to develop and improve as the guitar matures and its woods open up.

Overall, this Guild Westerly Collection OM-150 represents great value for money and really needs to be on your audition list if you’re looking for a new guitar in this price bracket.