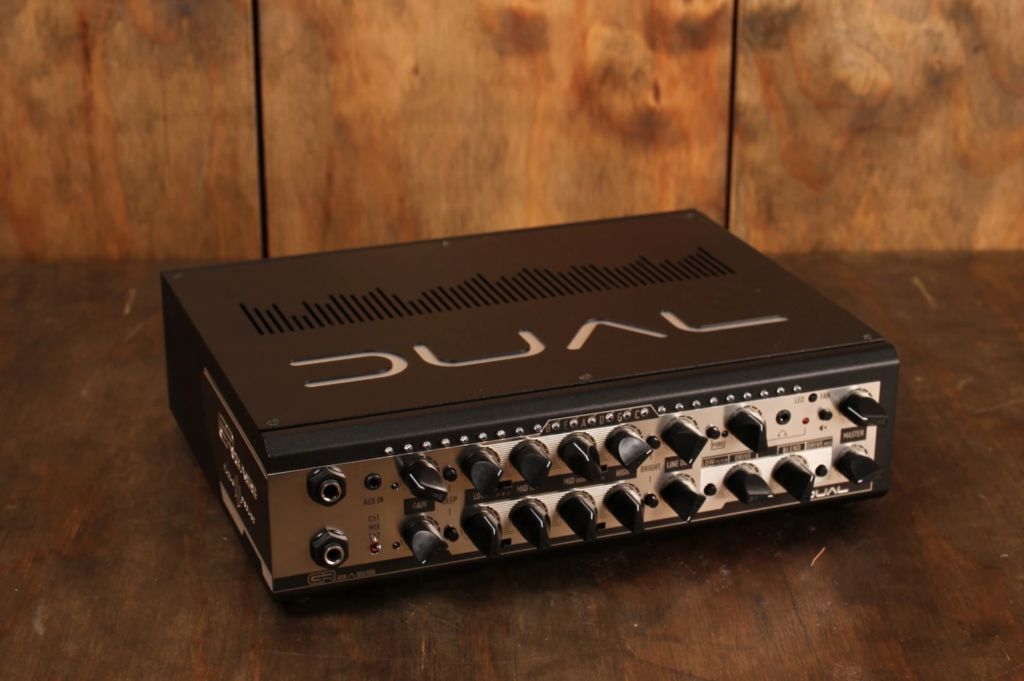 GR Bass, hailing from Monopoli, Italy head to our studio once again, following our review of the Cube 800 combo back in issue 63 - A superb combo that impressed us all.

With more functions than you can shake a stick at, I am diving straight in to the details as we have lots to get through. GR Bass didn't scrimp last time and they sure didn't this time either!

The Dual 800 is a single 800W RMS amplifier (in to 4 ohms) that features two separate preamplifiers. Each preamplifier feeds in to the same power amplifier yet also has it's on DI XLR output too that can send an independent signal to external devices.

This means that this amplifier is capable of some pretty cool tricks and in my video I set up just one example, though the possibilities are much wider reaching and I would need a far longer video to describe all.

Both channels can be used completely separately - run a keyboard or drum machine in to channel one, run your bass in to channel two and enjoy the tonal tweaking that both channels offer. Each channel could be ran out to separate inputs on a PA system for level mixing. However, it is possible to mix the channels one board - and in my case I used the drive circuit on channel two enabled to create a pseudo "dual signal path" sound. I set up a deep a fat rumble on channel one but on the second channel a more mid present driven tone - not dissimilar to the method Billy Sheehan has used for many years himself. With the drive structure I was able to remove much of the low end using a filter option and sculpt the top end, but when blended with the deep sound of the clean channel, it all meshed very nicely and, certainly on stage in the studio.

The GR Bass Dual 800 may look daunting to the casual onlooker, but actually, the signal path, aside from the additional mixing functionality isn't dissimilar to other amplifiers in the GR Bass range - there's just two rows of controls instead of one as found on most.

Two inputs on the left hand side, one for each channel each feeding in to separate gain controls to optimise input level as well as, on channel two having an effect on the drive saturation. The Dual 800 has a four channel equaliser per channel with added "deep" and "bright" switches (the deep in this case is pronounced and adds a real added weight to a passive 4 string bass). I am also, as usual, a fan of some sort of parametric midrange and this amplifier has two per channel. You can adjust the centre frequencies using each of the three way switches on the front panel. The low mid reaches down to 185hz (thank you GR!!!) Which is within one of my favourite areas to tweak; it's an important bass guitar frequency that often gets missed on tone controls!

To the right of the equaliser and easy to get to are a pair of line out level knobs one for each channel - As I mentioned earlier, two XLR sockets on the back of the amplifier can be configured to blend the two channels or send them separately to an engineer.

The final controls on the right hand side include, on the top row: A "Pure Switch" that bypasses all EQ functionality giving you a clean power amplifier sound at the touch of a button. For silent practice or IEM use, the Dual 800 has a headphone output with level control. Beneath is channel two's drive section. Two knobs for drive (saturation) and (dry/wet) blend provide mixing in the distortion effect to taste, but I was especially pleased to see a switchable low-filter for getting rid of unnecessary low frequencies when pushing the saturation up. A mod switch offers hard or soft clipping too.

GR Dual 800 features a row of LEDs across the top of the unit - I touched on these briefly in my review video. A Mod button allows you to scroll between four VU meter display modes or to select the in-built tuner, or finally if LED light shows aren't your thing, the option to turn them off.

For those who aren't a fan of whirring fans whilst recording in the studio, GR Bass does have an option to suppress the fan/s operation.

In my review you will see we connected the optional foot pedal which communicates via a CAT ethernet cable with locking connectors.

The whole amplifier is finished in a rather fetching white colour but something that pleased me no end is that you can order a GR Bass amplifier or cabinet in custom colours! Check out GR Bass' website for more details and see examples of some of their eye catching creations.

Let's finish off at the back of the amplifier: Two speaker connectors and an effects loop complete the audio connections mentioned in this review. The amplifier has an auto-sensing power supply for hitching up anywhere whilst on your world tours. But wait! What is this? Firstly a USB charger output and right next to that an output to power your 9v DC pedals! Genius! It's almost too simple it's such a good idea to have these included! Both provide up to 300mA of DC current for your peripherals.

It's round up time: A super modern amplifier that is so versatile it will find use away from bass guitar altogether! Of course this is a high end example utilising quality workmanship and a feature rich design. There will be a price to match, but you know, it's much less than I was expecting for such an example. It has plenty of power to cut through on stage, but the extensive routing options means that it's just as at home in the studio, so it's right down the middle on my evaluation scale below.