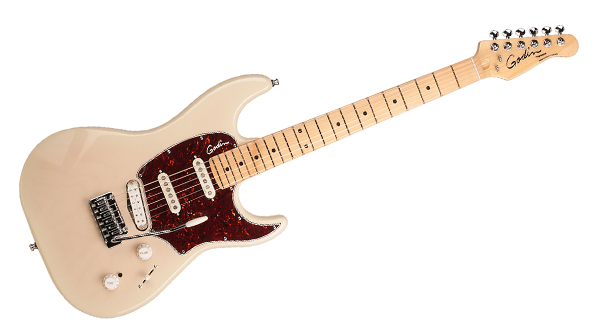 Unintentionally, this issue of GI turned out to be a kinda sorta 'strat-esque' shoot-out, with offerings from three top makers, including Brand F itself. Unexpectedly, Canada's Godin sent us one of its Progression Plus models, so we decided to set it a major challenge - could a Godin impress our 'Mr Strat' Michael Casswell with its own offering in his favourite genre? Read on...

Canada's Godin is a well established maker of excellent quality guitars and the GI review team has been consistently highly impressed with its products over the past few years. In fact it seems we're not alone as it's hard to escape the growing number of Godins we're seeing in guitar shops. The Godin Progression Plus could be called their Stratocaster-type guitar and let's be frank, that's a hard target to aim at. Fender seems to be going through a good period just now and anyone challenging it with twin cutaway guitars in that general area has to contend with the conservatism of guitarists who often seem to prefer to stick to the big brand they know, even if there are alternatives with distinct advantages. That would be a very poor reason not to give the Progression Plus serious consideration. To start with, while the shape and specs may seem fairly familiar at first glance, there are some very nice features that aren't immediately obvious. The Progression model has been around for a while, but this 2015 Progression Plus version has been tweaked to have a smoother curvier body, and now bears a Seymour Duncan JB Junior single coil 'rails' humbucker placed in the bridge position. Along with a choice of rosewood or maple fretboards, and some sweet looking finishes, the guitar certainly promises a lot.

However, what really sets the Godin apart is the ability to switch your pickups from passive to active with the on board 'High, Definition Revoicer' or 'HDR' for short. This is not just a gimmick. It really is like having two sets of pickups in one guitar at the press of a button. Having tried the guitar thoroughly, the HDR system certainly has my attention. In passive or active mode, the pickups take on different character and output. The two Godin GS2 single coils, sound very Strat-like in passive mode, but are fat and woody in active mode. The Seymour JB Junior barks around the midrange in passive mode, and in active mode it takes off with huge output, harmonics and fat tone. The HDR system really does make these pick ups fly, and that makes the whole guitar very versatile indeed.

What his means is that with the Progression Plus You are effectively getting five passive tones and five active tones, which is a great selling point. I am presuming, but don't know for sure, that there is a 9 volt battery on board somewhere in the guitar. Without taking the back panel off I don't know, and nothing is mentioned on Godin's website to confirm this either way, but to turn the guitar passive to active, power must be coming from somewhere, unless it's magic! Suffice to say, in both passive and active mode, the guitar sounded excellent.

It looks very cool too. Our sample came in a nice shade of off-white and the tortoiseshell pickguard gives it a grown up look which I like. You get a choice of this white, a gloss black or a vintage sunburst and all are applied over what is described as a Canadian Laurentian basswood body. You can get as lost in a discussion about the merits of different tonewoods as you can in one of the giant Canadian forests in which this timber was grown but suffice it to say that basswood is a traditional and popular choice for solid guitars and what matters is how it sounds and plays - which we've already established as being excellent.

From a hardware point of view, the Progression Plus features a two point 'Tru Lock' trem system. The Tru Lock somehow grips the trem arm as you screw it in, to avoid that hideous slop you can get with this style of trem. It works too. The arm felt positive, making the trem sensitive to all my usual whammy bar antics. I do hope that the Tru Lock system is not something I could wear out within a year, and could stand the long term test of a player like myself. So far, though, so good!

The neck is rock maple with a pale rosewood board  that has a very flat 12 inch radius. So in theory, string bends should be really easy. I say "in theory", because our review guitar was strung with some real man size gauge strings. Possibly 11-52. There certainly was some string tension there, and after a long day of filming and constant playing, I felt it! The guitar would have been a delight to play with some regular 9-42 strings. I like an easy life! The matte finish C shape bolt on neck felt great and the 22 medium jumbo frets were very familiar and contemporary.

I've played a few Godin guitars and they've seem consistently good. Mainly my experience of them has been with the electro acoustic models and in fact this was my first encounter with one of their Strat-style guitars. I liked the choice of the JB single coil sized humbucker (I had one in a Strat years ago) and I was really very impressed by the HDR system. Being able to flick between passive and active is truly a great feature, and makes this guitar hard to beat for a do absolutely everything instrument. It's well made, sounds great and sells for a very attractive price. Come to think of it, I wonder if Godin wants this one back?