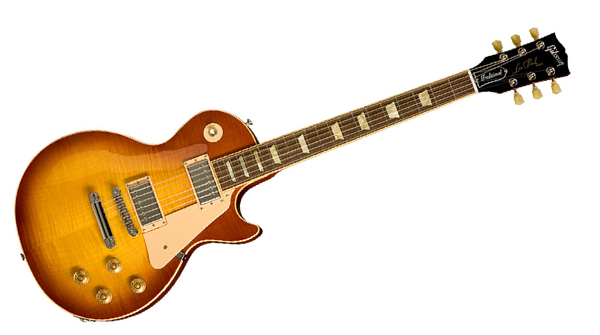 Gibson makes a long overdue return to our pages with a recreation of perhaps the archetypal Brand G guitar - the 2016 version of the Les Paul. Has Nashville finally overcome the 'autotune madness' of 2015? Is it a return to form? Tom Quayle finds out.

2015 wasn’t the best year for Gibson as the company’s move to modernise the beloved Les Paul Traditional with adjustable brass zero frets, holograms, auto tuners, wider fretboards and titanium saddles resulted in guitars that just didn’t appeal to the majority of their more vintage minded customers. For their 2016 version of the LP Traditional, Gibson has taken a much more literal (not to say sensible! - Ed) interpretation of the word ‘traditional’ with a guitar that harks back far more to the original design but with just enough modern appointments to only put off the most ardent of purists. You still get all the bells and whistles as optional extras, but the core model should appeal far more to Gibson’s core customer base.

The 2016 Traditional LP utilises the classic combination of a mahogany body matched to a carved AA flame maple top and mahogany neck. The AA flame on our sample wasn't the most impressive you’ll ever see, but certainly looks good enough at this pretty reasonable price point and is certainly a lot more attainable than a highly flamed Gibson Custom Shop LP at three or more times the price.

The mahogany body features Gibson’s traditional weight relief, where nine holes are cut out of the body at strategic places in order to keep the mass of the guitar down, whilst affecting the tone and resonance as little as possible. Hardcore traditionalists will shun this more modern approach (although it has been adopted by Gibson since the 1980s), preferring the heavier design and sustain of the original Les Paul, but for many others the lighter body will be a good option that still sounds great for most people. For 2016 Gibson have also gone back to more classic hardware in the form of chrome finished tune-o-matic bridge and stopbar tailpiece, as opposed to the nickel hardware found on the 2015 model.

The one-piece mahogany neck features a dark rosewood fretboard with a comfortable 12” radius and ‘Traditional’ profile that is more friendly than the wider neck of the 2015 guitar. It’s a nice balance between the baseball bat vintage necks and the more modern thin profiles and gives you something to dig into without being overbearing and hard work. Classic trapezoid acrylic inlays are accompanied by cream binding and 22 well finished frets and a modern Graph Tech, self-lubricating nut for improved tuning stability. Ditching all of last year’s innovative appointments, Gibson has opted for a much more traditional headstock with vintage tuners and simple Gibson and Les Paul Model logos.

The guitar is available in a number of classic finishes, all coated in a Hi Gloss lacquer that is well executed at this price point (and is, thankfully, nitrocellulose - Ed), resulting in a classy looking guitar, but one that won’t blow you away. Functionality is the name of the game here and it’s good to see Gibson returning to the classic design that works so well without adding too many frills to bulk up the price and make this guitar unaffordable.

The same 'no frills' approach applies to the electronics too with two Alnico II Humbuckers - a 57 Classic in the neck and the slightly hotter 57 Classic + in the bridge. These pickups are firmly planted in the original PAF territory and match perfectly with the three-way switch and doubled volume and tone controls of the original. There are no coil-taps or clever switching options here with Gibson once again going back to the basics that should form the core of the ‘Traditional’ model in this range.

In terms of playability the 2016 Traditional is a very nice guitar with a very balanced body to neck ratio and a smooth neck. It won’t blow anyone’s mind, but it certainly justifies its reasonable price point, especially considering the excellent hard case that’s included.

Disappointingly, the factory set-up left a fair bit to be desired, however, with a very low action that caused less sustain and notes slightly fretting out across the guitar. This is easy to fix of course, but frustrating, considering that Gibson state each guitar has a comprehensive hand set-up at the factory and most people will make a decision as to whether to buy a guitar based on their first impressions with the instrument.

We can't say often enough that readers wanting to buy a new guitar should either try to buy in person from a store and negotiate a set-up with the retailer, or make sure they can either set a new purchase up themselves, or hire a repairman to do it for them. Far too often, even the biggest brands cannot be relied upon to get it right from the factory.

Tonally, the 2016 model is very impressive indeed thanks to those superb 57 Classic pickups and wood combinations. There is a huge amount of detail and note clarity in these pickups that works surprisingly well for clean tones. It’s easy to associate the Les Paul with classic Rock tones, but this guitar is equally adept at Jazz and brighter more chimey cleans as well as those grittier, high gain sounds.

The Les Paul Traditional 2016 T is a nice return to form for Gibson, pushing away the memories of the 2015 model, not necessarily a bad guitar in its own right, but certainly not traditional! This newest model is a great playing and sounding guitar at a surprisingly reasonable price for Gibson. It’s not revolutionary in any way, but that’s the point - it fulfils the requirements of a great Les Paul without having to sell a kidney to afford one.