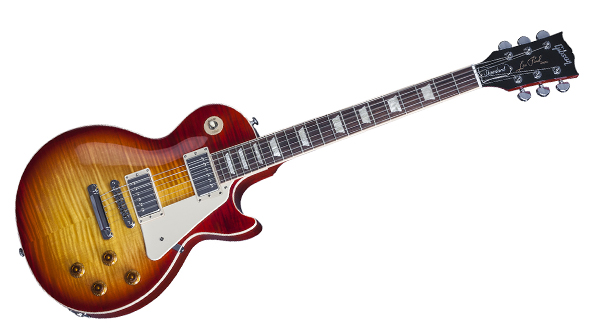 How could we interview that champion of the Les Paul, Mick Ralphs, without looking at one the latest incarnations of the immortal model? Tom Quayle volunteered.

The Les Paul is one of, if not the most iconic guitars of all time, representing a tradition of Rock and Blues players stretching back over most of the history of the electric guitar. This tradition is something that many guitar players value a great deal and to mess with the iconic formula is a risky business. The 2015 Les Paul models took the classic LP model and tweaked it with updates that Gibson assumed would appeal to the modern player, but the backlash against these changes proved that the Les Paul formula is a tried and tested one and the addition of robotic tuners and zero frets was a change too far for most guitar players. It was a shame, as the 2015 Les Paul Standard was actually a great looking and playing guitar with some cool features, but for their 2016 models Gibson have seen sense and returned to that classic, iconic formula with only the smallest of modern twists for a model that should be far more accepted by the string plucking masses.

The 2016 Les Paul Standard T drops the more divisive additions from the 2015 model, losing the G-Force tuning system and zero nut in exchange for the more conservative Grover locking tuners and TekToid self-lubricating nut. The modern, weight relieved body is carved from mahogany with a classic AAA figured maple top on the translucent finishes, or a plain maple top on the Gold Top, Blue Mist and Ebony ones. The flame tops seem to vary greatly in quality from guitar to guitar with our review model being pretty but certainly not up to the level shown on Gibson's website pictures. Nevertheless, the guitar body looks good if not quite as figured as we’d expect at the asking price compared to an equivalent PRS or Suhr top for example. Gibson has chosen to go back to the classic body carve for the 2016 models as opposed to the ‘enhanced’ carve from the 2015 variant, again coming back to tradition in order to appease its customer base.

The guitar features a mahogany neck and a pretty thick rosewood fretboard with acrylic trapezoid inlays (that could be seen as a downgrade from last year’s mother of pearl inlays, but look good all the same) and a classic mother of pearl ‘Gibson’ logo and ‘Les Paul model’ decal on the headstock, replacing the Les Paul signature from the 2015 guitar. The rest of the design follows suit with cream binding around the top and fretboard, black headstock paint and Hi-Gloss lacquer for a very shiny finish indeed. There are eight translucent finishes available, plus three paint finishes that should suit all tastes.

One area where Gibson has kept things just modern enough is in the electronics department where a pair of excellent Burstbucker Pro humbuckers are paired with the classic three-way switch and separate Volume/Tone control, but each knob has a secondary push/pull function to increase the range of sounds available. The Volume controls pull up to split the humbuckers for highly convincing single tones, whereas the Lead Tone control enables a pull out ‘Pure-Bypass’ mode, hard wiring the bridge pickup to the output jack, bypassing the other electronics and the Rhythm tone control acts as a Phase switch in its pulled up position. The variety of tones on offer is excellent for a simple two pickup guitar, giving the 2016 Les Paul a much wider tonal palette than one might assume.

Where the 2016 models really excel is in terms of playability and comfort. The modern weight relief gives the guitar a much more balanced feel that is well worth sacrificing some sustain over for those with even the slightest of back or neck issues. This is still a moderately heavy guitar but nothing like as dense as a fully solid Les Paul. The compound radius and asymmetrical slim taper neck design are lovely to play for both lead and rhythm work across the guitar’s range and the excellent fret work means that fast lead work is a breeze. As with some of the other Les Pauls we have played here at Guitar Interactive, the allegedly 'hand-finished factory set-up' could have done with some work as the action was set way too low with fret buzz all over the place. It was quickly and easily fixed, but this shouldn’t be a problem on a guitar straight from the case at this price point, even acknowledging the fact wood moves in transit.

Tones are fantastic across the board though, with a clarity from the Burstbuckers that wasn’t expected at all. Clean tones are very detailed and responsive and overdriven tones sing with plenty of sustain or get aggressive and tight on higher gain settings. As mentioned earlier this is a very versatile guitar and covers a lot of bases with authority all the way from classic Les Paul Rock tones to almost Strat-like chimey cleans.

It's just a shame then that the asking price for this excellent guitar is so high, even bearing in mind the lovely deluxe hard case included. There are a lot of other guitars in this price range that compete with the Les Paul and unless you really must have the latest Les Paul over any other guitar there are a lot of guitars out there that can offer just as much for less money. Having said that, of course, the continuing sales of Les Pauls show just how resilient guitar players are to any suggestion of buying an alternative! I should add here that DV247, who very kindly loaned us this review sample, would have set this guitar up – we simply took it out of the box as it had arrived.

The 2016 Les Paul Standard T is a nice guitar for sure though – it won’t blow anyone away but will almost certainly be more appealing to traditional Les Paul fans than the 2015 models. Our advice, as always, is to negotiate a set-up within the price and try several if you can, to find the one with the top that you like.