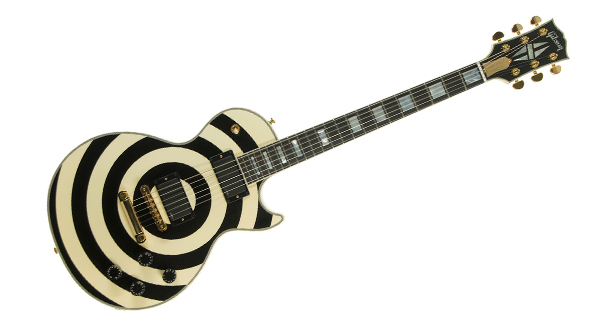 Along with Fender's Strat and Tele, the Gibson Les Paul is one of the most sought after and widely used guitars in popular music. A collaboration between Gibson and legendary guitarist and multitrack recording pioneer Les Paul, who had originally approached Gibson some time in1947, a deal between Gibson and Les Paul was agreed around 1951. He used the iconic guitars until his death in 2009, aged 94.

Since its release Gibson has made many models and variations in the Les Paul line, among them countless Signature models including guitars named for Slash, Gary Moore, Peter Frampton, Jimmy Page, Ace Frehley, Billy Gibbons, Buckethead and the subject of this review, Zakk Wylde.

Zakk Wylde first joined Ozzy Osbourne's band in 1987 at the tender age of 20. He'd been a long time fan and user of the Les Paul, mainly his cream white Custom with the Bulls Eye paint job. There were many similarities drawn between Zakk and the late Randy Rhoads, whom he replaced in Ozzy's band - long blond hair, bell bottom jeans, and also the cream coloured Les Paul. Although Zakk sighted Randy as an influence, he had his signature Bulls Eye design sprayed on his guitar to give himself a trademark. The original design was meant to be the spiral from the movie Vertigo, unfortunately, when the guitar was returned, the paint job was incorrect. It became Zakk's trademark all the same. Although the finish has appeared in many variations including Mirror finish, orange Buzz Saw, and Camo graphics, Zakk is still mainly associated with the Cream Les Paul with the black Bulls Eye. The original guitar, affectionately called the Grail, was actually lost after it fell out of the back of a tour truck while Zakk was on the road with Black Label Society. The lost Gibson saw the inside of several pawn shops, before it was finally returned to its rightful owner.

As well as its slightly radical paint job, the guitar includes Zakk's choice of pickups, active EMGs, an 81 and an 85, resulting in a thick heavy tone, aiding Zakk with his signature squealing harmonics. Another unusual feature of this guitar is the unfinished maple neck, giving a smooth, worn-in feel to it. Finish this off with gold hardware, and you have a worthwhile, pretty distinctive addition to the Les Paul range.

Although the guitar is pretty weighty, you soon forget that when you hear it in action. The tones are thick and creamy, ranging from classic Blues, with the tone backed off, to searing Rock metal lead tones in the bridge position. The Gibson also cleans-up surprisingly well, considering the high output active pickups, resulting in glassy cleans when on the bridge pickup, or woody vintage tones on the neck pickup.

I've put most of my impressions of playing the sample Gibson loaned us (a pretty roadworn one, I should say, but very well set-up and nicely playable) in the accompanying video, so make sure to check that out!

Obviously, visually this guitar screams Zakk Wylde and metal, but if you find the finish appealing, this guitar would make a good, if rather expensive, addition to your collection. I'm not sure if I would personally choose it if I was in the market for a higher range Les Paul, but after spending some time with this instrument it's definitely not a one trick guitar, and is well worth a serious and close look.

Of course, you have to bear in mind that the distinctive graphic means, should you have to sell one secondhand, that the appeal is likely to be limited to Zakk Wylde admirers and, sadly, this model also carries a whopping price - even bearing in mind it comes from Gibson's Custom Shop range. If all you wanted to do was look like Zakk, there's a far cheaper Epiphone version. The Gibson will get you closer to the ZW sound, of course - though it won't give you his great technique! - and you can buy a lot of fantastic guitars for this sort of money that aren't quite so limited in their appeal.