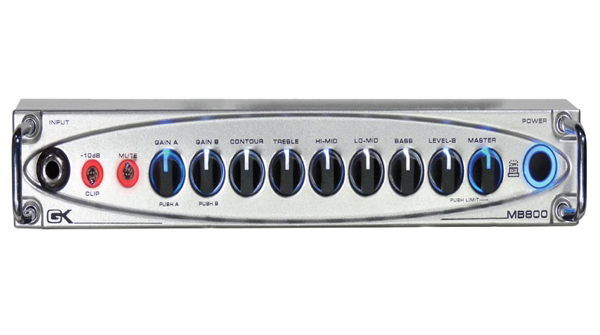 As the race to make the loudest and the lightest bass amp shows no sign of abating, US maker Gallien-Krueger makes a bid for the 'best in class' award. Dan Veall looks very thoughtful...

The last couple of years have seen a real step up in the output power of bass amplifiers. They seem to be getting smaller and smaller too. Recently we have reviewed the TC Electronic RH750 and the Ampeg PF350 (that is also available in a 500 Watt version) and enjoyed looking at the Randy Jackson TTE500 from Markbass, yet another company which also brings lightweight and powerful amplification to the table. Amongst the well known manufacturers showing off new kit at this year's NAMM show in Anaheim was Genz-Benz with its updated Shuttle and Streamliner heads, boasting huge D class amplifiers in gigbag sized cases. And then there was Gallien-Krueger's latest  - the MB800.

Since hearing via the 'bass playing grapevine' rumours that a higher power version of the Gallien-Krueger MB500 was on the cards, I've been waiting rather patiently to get my grubby paws on one. Like many iGuitar readers, I am very much a musician with those 'gear buying needs' and have read many a comment online, comparing this new head to the others I have mentioned above. The MB800 promises much, so it was with a certain amount of excitement that I finally hauled one down the stairs into the Bassment for what we like to call...a good once over'.

For someone who has a certain penchant for coloured lights, even switching this amplifier on is a joy. On pushing in the power switch, the outer ring changes from a red light to blue when it is all ready to go. Similarly the mute switch has a ring round it that glows red when engaged and should you clip the input with a signal that is too hot, the ring around the pad switch flickers red too. But there's more on the front panel: the MB800 includes a foot switchable channel function (a simple but very sturdy metal foot switch with integral LED indicator is included in the box for the amplifier along with a standard instrument lead for connecting the two.) On the front panel of the head are two gain controls and a separate level control for the second 'channel'. When the second channel is selected, the blue lit ring on the channel A gain knob changes over to the Gain B knob providing visual notification of the channel change. Incidentally, without a foot switch, channel changes are made by pushing the gain A or gain B buttons in.

Soundwise, those who have already had an opportunity to try this amplifier have suggested it is unmistakeably G-K in character. It is punchy in the bottom end with a great clarity that is a little forward without being harsh, they say. I've played through a few G-K heads in my time and I am inclined to agree with that, but there's something about the MB800 that feels more energetic than the other MB heads I've tried. The mid-frequencies are great too. It has a lot of power on tap which almost seemed to burst out of the test cab we were using. This head does include a completely different preamp in comparison to other MB heads though, featuring an all FET design for a 'valve-like' feel. To over-simplify, 'Field Effect Transistor' circuits can be configured in such a way that they have a similar effect on signals to valve circuits, which is pleasing to the ear and the MB800 sounded great when the pre-amplifiers were driven towards distortion. That means the 'G-K growl' is very much alive and well here when the gain control is pushed up! Bob Gallien obviously knows this tried and tested method works well and has used the same 'G.I.V.E' (Gate-Induced Valve Effect) design in his FET pre-amps for the last 30 years. I have to say, this amp delivers by the spadeful and is fast becoming my favourite 'gig bag' sized amplifier - and I've been lucky enough to play through a lot of the current crop of favourites too.

Whilst we were recording the videos, we did notice the sound of the two fans situated on the side of the unit kick in with a fair amount of gusto. You may think of it as a negative point, but I see fan noise as a by-product of the technology used and thus I can easily live with it. Hopefully, you'll be making use of those huge Watts in a gig where you won't hear too much of that fan noise - it will be masked by those luscious bass tones coming from the superb EQ section!

Speaking of huge Watts, the MB800 also includes a power amplifier limiter that can be disengaged. One of the nice things about the functionality is that when the limiter is not part of the signal path, you will still get indication that the amplifier section is peaking. That's good thinking on the part of G-K, providing constant indication of the amplifier's status .

Also on the front panel, as well as a wonderfully usable and musical four-band EQ section, is a contour control. This allows manipulation of the amplifier response, for example scooping out those mid-frequencies to make the amplifier do a brilliant modern slap sound. Yes, I am really pleased to say that this amplifier is able to produce a wide range of usable sounds, with very little tweaking. I find that some amplifiers either have an inherent tone that you just can't get rid of, or the EQ section makes it difficult to dial in the sound you want easily.  Not so with the MB800. I'd have been happy leaving all controls at 12 o'clock.

Around the back, G-K has managed to cram in even more usable functionality. Two Speakon connectors and the IEC power socket at either end of the shell flank the foot switch socket, effects loop and tuner out socket (for silent tuning). As if that wasn't enough, there is a socket that can be used as a line-out or headphone connection. A 'mode' switch next to it allows you to choose between the two modes of operation. There is also a D.I. output.

Once again take a look at the technical specs for this amplifier. It's great to see so many cool features in a head that will slide nicely in to a 1u rack space or gig bag and weigh just over 2Kg and be powerful enough for pretty much any gig. The tone of this amp is great, the price is very fair. In fact I think we have just found a new review favourite. This is just a brilliant, brilliant amplifier.